Hasbro’s line, KRE-O, has produced some interesting — and very nice — Transformers and Star Trek sets that I’ve enjoyed building. Character Options’ Doctor Who sets were very nice and felt very LEGO-like. MegaBloks has made World of WarCraft and Halo sets that, while conceptually nice, weren’t fun to build. And the less said about the Best Lock Stargate SG-1 sets, the better.

Recently, I picked up a set at Ollie’s Bargain Outlet, the True Legends Castle Clash.

I’d never heard of True Legends before. It’s an in-house line for Toys R Us — Toys R Us can be abbreviated as “TRU,” which gives you True, hence “True Legends” — made by the K-NEX.

I saw the castle set at Ollie’s back when I was shopping for the Angel Tree package and was intrigued by it, but I didn’t pick it up then. I went back a few weeks ago, to look around, and picked up a couple of books — a biography of Woodrow Wilson, Hillary Clinton’s Hard Choices, a book on a 30-day/30-city baseball road trip — and saw they still had the set in stock. Since I like castles, and it wasn’t that expensive, just thirty dollars, I decided to give it a shot.

I’ve never built a K-NEX set before, so I didn’t know what to expect. Inside the box, it looks like LEGO — bags of bricks, instruction booklet, sticker sheet. In short, it’s what you’d expect.

The bricks look like LEGO, with some slight variation, namely holes through the bricks between the studs.

Up-close, the bricks look especially LEGO-like, right down to some sort of writing (which I couldn’t make out) atop the studs.

How did the bricks feel? They felt very solid. The bricks had a heft to them. They were smooth like LEGO. They snapped together like LEGO. Building with these never felt wrong in the way that buidling with MegaBloks or Best Lock did. I’d rank them on par with LEGO, just above Character Options and KRE-O.

I set to work. After about ten steps, I had a castle that looked like this.

I’ve built LEGO castles in my time, and building Castle Clash was different. The LEGO castles I’ve built have had specialized wall pieces. This set built the walls layer by layer. The gray bricks, usually 2×4, but sometimes 2×2, had slightly rounded corners, so I stacked them the castle’s walls had the look of a castle built from hewn stone. Also, because the bricks used were 2x2s or 2x4s, the walls had an impressive stability to them.

The castle gate proved to be a little problematic; it had a tendency to come apart while the base of the walls were still under construction. Once the arch was completed, however, the gate ceased to be a problem; suddenly, the gate had the stability it needed to hold together.

As I continued to build, I was impressed with how… substantial this set felt. The base itself had a large footprint, then there were two internal staircases, and then I started to build the two towers over the castle gate.

You reach a point where you can say to yourself, “You know, that’s a pretty impressive castle.”

And then, you keep going. There’s another level to build.

Eventually, I would tear the castle back down to this point and rebuild it in a different direction, but that’s to come later.

There’s another level to the tower to build, and before too long, I was done. 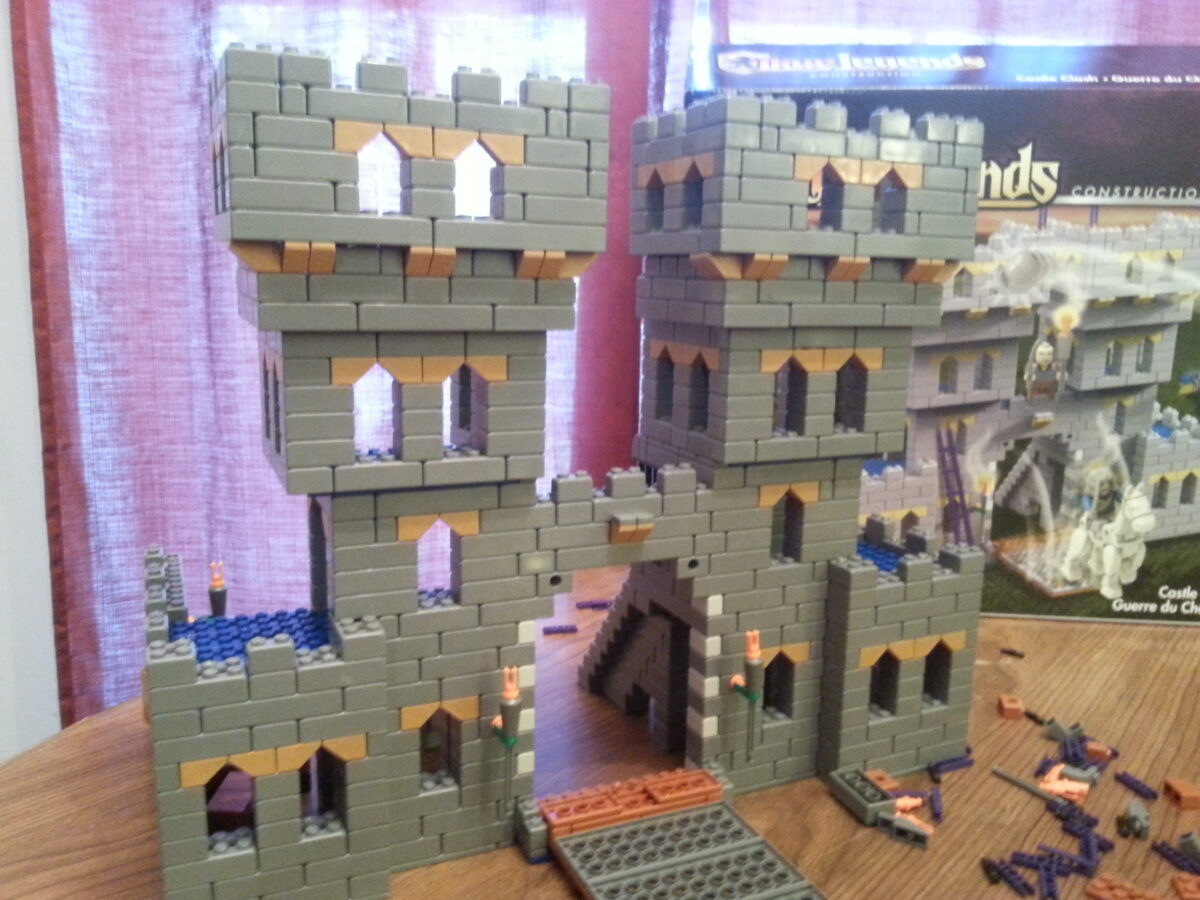 From the rear, this is what the finished castle looks like.

As I did with the KRE-O Enterprise, I felt the need to tinker.

I felt that what the castle needed was a crosswalk bridging the two towers overlooking the gate. I had extra gray bricks — the set also has instructions for a blacksmith’s furnace, and I hadn’t built that — and it seemed to me that between those bricks and the bricks I’d gain from tearing down the towers’ inner walls, I’d have what I needed to build the walkway and fortified wall between them.

Here, then, was my first attempt.

There was nothing wrong with it. It looked great. I didn’t feel it was right, though. For one thing, it was too high.

Remember how I said I was going to tear the model down and rebuild? That’s what I did. The reason for stripping the model down as far as I did? I needed the 2x8s at that particular level. Basically, I wanted the crosswalk at the same level as the upper layer of the towers, and I was going to need the 2x8s for things like supports and, naturally, the crosswalk wall itself.

I’m not sure how I ended up doing what I did, but it made sense to me. There were pillars and crenelation and the idea of the walls was restored; now there was a walkway between them. What I came up with felt right.

From behind, the upper towers and the walkway between them looks like this.

The result is something that I’m really satisfied with. It looks like something out of a Brothers Hildebrandt Lord of the Rings calendar. I was pleased with the standard Castle Clash build, and I’m really happy with the modification I made, though I no longer have the pieces necessary to build the furnace as they went into supports and walls and such.

For right now, the set is sitting on my dining room table, along with the pieces for the set’s siege ladders, which I’ve not yet built, either. (I may put those pieces in a baggie for some later date. I don’t see the necessity for the siege ladders.)

Overall, I’m very happy with this set. It has over 1,300 pieces, construction wasn’t difficult, and the finished product (even without the modification I made) is a solid piece of work. If you need an inexpensive LEGO-like castle option, K-NEX’s True Legends Castle Clash is worth taking a look at.