An Oasis of Natitude Along the Banks of the Susquehanna

On Tuesday I attended my second Harrisburg Senators game.

I was taking a vacation day at the office to attend to some personal matters and get in a day of downtime between my publication cycles at work. Over the weekend I decided that since the Senators were at home I could attend the game as well on the vacation day, so at work on Monday I pulled the trigger and bought a ticket.

My first Senators game I didn’t take a lot of pictures, though there were a number of things that, as a Nationals fan, I thought were really interesting. This time, I took more pictures of Metro Bank Park, with a special focus on images that reflected Harrisburg’s baseball history and the Senators’ links to the Washington Nationals.

Take, for instance, the team’s offices at the stadium entrance:

The logo typography of the Harrisburg Senators really interested me. The “Senators” wordmark appears to use the same typeface that the Nationals wordmark uses. The Nationals’ Curly W, when placed next to what I started calling the Senators’ “Curly H,” looks like it belongs to the Curly H; the letters have a similar weight and feel, the H’s serif looks like it comes from the W’s serif.

Tuesday night’s game against the Richmond Flying Squirrels (affiliated with the San Francisco Giants) was also Bryce Harper Bobblehead night, and I made sure to arrive in Harrisburg early so I could get one of the bobbleheads of Harper in his Senators jersey. Half an hour before the gates opened, there was a good sized crowd, many of them in Stephen Strasburg or Bryce Harper jerseys. And toward the top of the stairs leading to the left field entrance, there was a young woman in a Jayson Werth jersey.

In short, this crowd was more favorably disposed toward the Senators than the crowd I saw two weeks earlier when the Senators playing the Reading Fightin’ Phils. While I saw some hats of the Phillies, Yankees, Orioles, and a handful of other teams throughout the crowd, I saw vastly more people in Senators gear and a goodly number of people in Washington Nationals hats, including a woman who sat near me who wore the red 2012 National League East Champions hat. (I have one of those. I’ve never worn it. I feel as though it’s cursed.) I had found an oasis of Natitude along the banks of the Susquehanna.

However, this crowd no more clapped and cheered for the Senators’ player introductions than did the crowd two weeks earlier. I really felt alone as I clapped for the Senators players as their names were read off. Two weeks ago, I had thought that it was a hostile crowd rather than an indifferent crowd the Senators were playing in front of. With my second visit to Metro Bank Park I concluded that while the minor league crowd in Harrisburg is into baseball, they’re not as much into the players, at least the ones who might not ever reach the big leagues and stardom.

The crowd was somewhat sparse, with only about 2,500 fans in attendance. (The previous game I’d attended had had a crowd of about 6,500, if I remember correctly.)

My seat was a great location to watch the game. It was a terrible location to sit, however. In row 1, I had a metal beam fence in front of me, and my legs were too long for me to fit comfortably in the seat with the metal beams in front of me. I also ended up catching the pocket of my shorts on the armrest when I stood up to let the people in my row out, causing my shorts to rip apart. In the future, I won’t sit in row 1 of the grandstand at Metro Bank Park.

It was an enjoyable game, basically a pitcher’s duel. Senators starting pitcher Paul Demny took a no-hit bid into the fourth inning, Josh Johnson (who had just returned from bereavement leave) hit a pinch hit home run to put the Senators on the board in a scoreless game, right fielder Steven Souza nailed Richmond’s Javier Herrera (the tying run) at the plate for the second out of the ninth inning, and Aaron Barrett locked down the 1-0 victory. 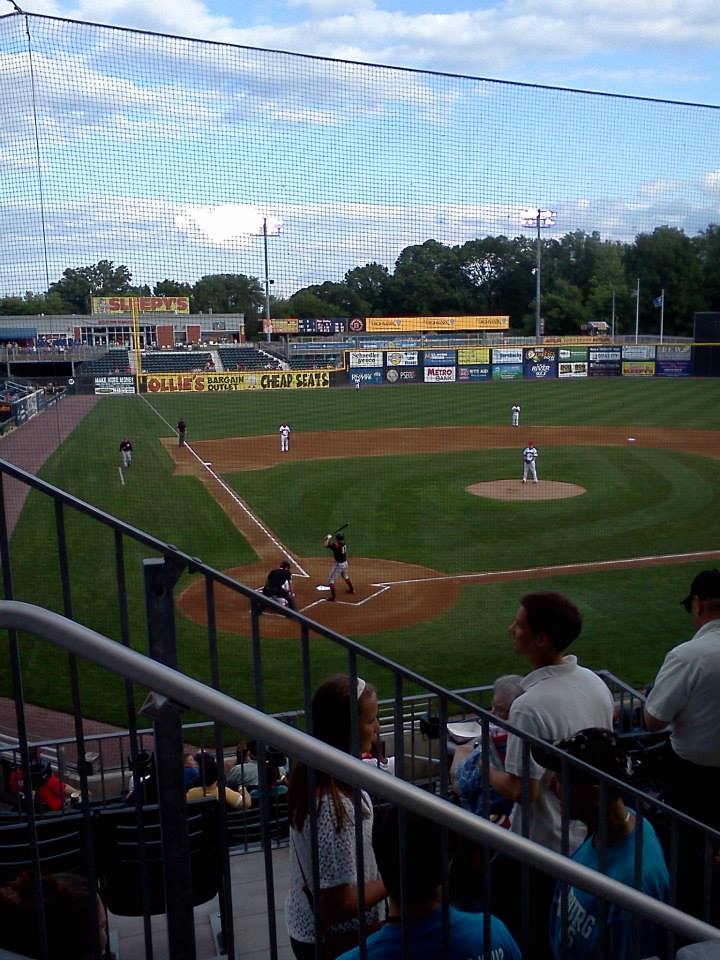 During the middle innings, I took a walk around the park to stretch my legs — and to take pictures of the way Metro Bank Park presented Harrisburg’s baseball history and the team’s links to the Nationals.

Along the concourse, there are pictures of the “All-Time Senators Team,” which includes Stephen Strasburg and Ryan Zimmerman. There are also banners of Senators greats, such as Ian Desmond along the concourse and Strasburg along the third base boardwalk. In the Kids Zone area, there are banners with other Nationals who came up through the Senators, including Drew Storen and Danny Espinosa.

Harrisburg’s baseball history goes further than recent Nationals, however. Until two weeks ago, I had no idea that Cliff Lee had pitched for the Senators, yet he also has a banner on the third base concourse. And Milton Bradley, known as one of baseball’s most troubled players. is immortalized at Metro Bank Park with a banner and remembered for “The Slam,” his walk-off grand slam with two outs and a full count that won the Senators the Eastern League pennant in 1999. Also among the banners were two players that I think of as Cubs, Michael Barrett and Mark Grudzielanek; I’d never realized that they came up through the Expos system.

In addition to the Bryce Harper bobblehead, I left Metro Bank Park with some other souvenirs. The commemorative cup at the concession stand featured Brad Peacock, Bryce Harper, Danny Espinosa, and Stephen Strasburg. I also bought two items in the gift shop — a blue Senators cap and Andrew Linker’s book on Harrisburg baseball, One Patch of Grass. 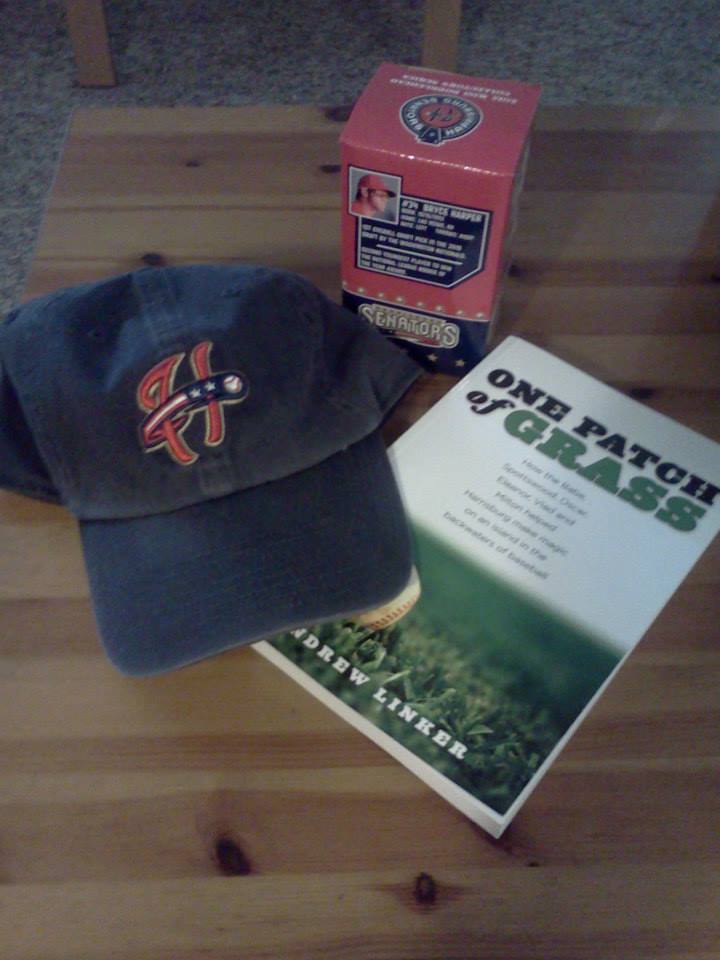 I’ve read about half of One Patch of Grass. It’s a book that Nationals fans (and fans of the old Expos, too) might find of interest as it covers Harrisburg’s baseball history from the 1890s up through early 2012. Linker writes about Strasburg’s arrival with the Senators, and later in the book he writes about (the earlier) arrival of Ryan Zimmerman, at the time the most anticipated player in a decade. Other parts of the book discuss how the Expos and Nationals front offices built their minor league system or, in the case of Omar Minaya, tore it apart. Linker also devotes a good amount of space to the Negro Leagues’ Harrisburg Giants, and there are sections about what life is like for a minor league baseball player. (Honestly, I wish I had read One Patch last summer before I wrote “The Ginger Kid,” a short story about a minor league fireballer.)

I had a great time at Metro Bank Park, and not just because of the baseball and the atmosphere.

I realized this on the drive back down 83 to York — I stopped feeling like a Nationals bandwagonner.

To be honest, I never really was. When I moved to Baltimore seven years ago, I adopted the Nationals as my local team, not the Orioles. (My baseball first love is the Chicago Cubs. I grew up with WGN and Harry Caray. It happens.) My best friend lived in Arlington, meeting up at RFK was something we could easily do, even though he was more an Orioles fan. (He had grown up loving Cal Ripken.) Then he died.

I stopped feeling like a bandwagonner with this trip to Metro Bank Park. The Cubs are still my first love and true love, and when I was at Nationals Park when the Cubs were in town and Strasburg melted down on the mound, it was the Cubs I rooted for that day and I was happy that they won (though I didn’t sing “Go Cubs Go,” because that would have been rude). But the Nationals are more to me than just the local team that I mercilessly cheat on the Cubs with. A bandwagonner wouldn’t go to a minor league park just to see the Nationals of tomorrow, just to document the team’s link and the stadium’s link to the parent club.

I really do like the Nationals. And I’m glad I’ve found the little oasis of Natitude in Phillies country along the banks of the Susquehanna that is Metro Bank Park.

For more pictures of my second outing to see the Harrisburg Senators, see this Facebook photo album.