A Night with Roy Orbison

Earlier in the year WITF, during one of their pledge drives, showed Roy Orbison: A Black & White Night, a concert film shot, obviously, in black and white, that was filmed in September 1987. Orbison’s backing band that night consisted of Elvis’ backing band, Tom Waits, Elvis Costello, and Bruce Springsteen, while his backing singers included Jackson Browne, Bonnie Raitt, and k.d. lang. In short, it was an amazing line-up of talent supporting one of rock and roll’s most distinctive voices. 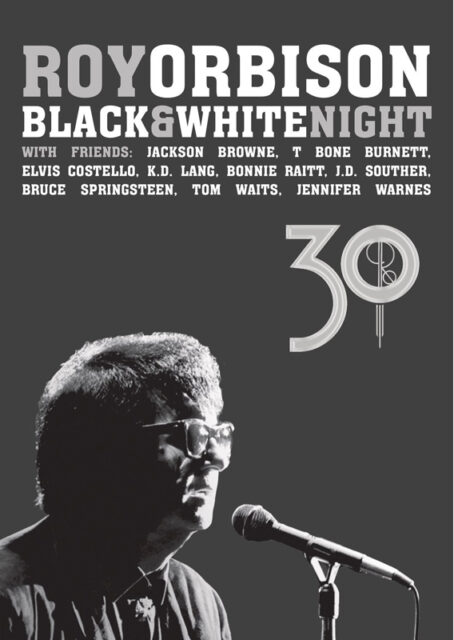 I wasn’t going to re-up my membership with WITF (which I had cancelled because they dropped A Prairie Home Companion) just to get the CD/DVD set. That seemed like an overpay for something I discovered quite quickly was available commercially in a remastered and expanded edition for the 30th-anniversary of the concert.

Week before last I ordered Roy Orbison: A Black & White Night 30, and it arrived on Friday. Frankly, after the week of deadlines and general lunacy that was work, its arrival came just in the nick of time, and last night I sat down and watched the film.

Orbison would’ve been 51 when this was filmed. He’d begun recording the tracks that would appear on Mystery Girl; he performs “The Comedians,” a song that Costello wrote for him for that album. The Traveling Wilburys were still several months in his future, and he would die of a heart attack the following year.

A Black & White Night is pure joy. From the atmosphere of the film to the sheer beauty of Orbison’s voice, it was tremendous.

I even liked Springsteen! (I’m not a member of the Cult of Bruce. I’ve never been a fan.) He has a look of pure happiness on his face, and he plays a dueling guitar solo on Oh, Pretty Woman that is amazing.

Definitely worth tracking down, and I’m glad I did.