Baseball on a Summer’s Evening

Wednesday night, I found a baseball outside Carlo Crispino Stadium after the Baltimore Redbirds’ home opener. In a roundabout way, that led me to witness the strangest ending to a baseball game I’ve ever seen.

I found the baseball in the grass. I assumed it was a foul ball, hit in a late inning during the Redbirds game against the D.C. Grays. I put it in the Beetle, drove home, and then on Saturday morning put it on my dining room bookshelf.

Then I noticed that the marking on the baseball read “Maryland Collegiate Baseball League.”

That’s a puzzle, I thought, since the Redbirds play in the Cal Ripken Collegiate Baseball League.

Perhaps, I thought, “Maryland Collegiate Baseball League” was a precursor name to the league, the baseballs were bought in bulk years ago, and they’re still being used today.

A quick Google search disproved that quickly. There’s a wholly separate summer wooden bat colleagiate baseball league in Maryland. And the night before the Redbirds’ home opener, there had been a game played at Calvert Hall High School’s Carlo Crispino Stadium. What seemed likely, then, is that this baseball had been out there, in the grass, for twenty-five, twenty-six hours before I found it.

Naturally, I had to investigate more. If there were more games played in the area around the office, say, a fifteen minutes’ drive, then perhaps I could catch a few more games in the summer evenings. 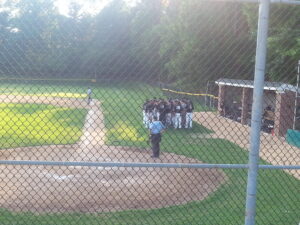 There was a game Monday night near the office, at St. Paul’s High School in Timonium, so I worked out an epic to-do list for work, powered through the sixteen items, and drove over after work for the game between the Baltimore Rays and the Putty Hill Panthers.

There was no PA system at Blenckenstone Field, no press box. There was a scoreboard but it wasn’t operation. No programs listing the players. Not even lights; this game would have be completed before the sun set.

The grandstand was an elevated aluminum platform of risers six rows deep. The crowd was tiny; at one point I counted twenty-three.

Without the distraction of announcing batters, the game progressed quickly. Batters came up, took their swings, went to base or back to the dugout, and the game moved quickly.

A older man in a University of Maryland t-shirt either directed people to chase after foul balls, or he went into the woods surrounding the field to retrieve them himself.

I saw a batter called out for batting out of turn. I saw a right fielder fluff two straight chances in a half-inning that had three errors.

I saw a jogger jogging in the deep outfield, in the field of play.

It transpired that the game was tied in the ninth inning, and the Panthers were the home team. The Panthers had two men on base, there were two outs, and a batter, #18, came to the plate.

The Rays’ manager came out to protest. Apparently, the batter wasn’t on the line-up he had. The umpire pulled out his line-up book and consulted it. There was a discussion. It grew animated. The Panthers’ manager was called over. He protested, “He’s been playing in the field for two innings, and just now you’re catching it?”

The batter was out. The Panthers’ dugout exploded in anger and profanities, not just at the situation but at their own manager for cocking up the line-up with the umpire.

The game ended in a tie. The umpire also called the game due to lighting conditions. It was shortly after 8 o’clock and, though I suppose another inning could have been played safely, it was probably the right decision.

I walked back to my car, thinking about the strange way the game ended — a batter out of turn, a game called for lack of lights — and the experience itself. As the shadows crept across the field and the sun fell behind the trees in right, young men played baseball and, on a pleasant night such as this, that sufficed.