Brainstorming Ideas for the Blog’s Design

This happens to me from time to time. Not as often now as it once did — I would change it up sometimes every weekend! — but I still feel the desire for a different look.

The theme I’m using right now is Apostrophe, albeit with a child theme that changes the link colors from red to blue and implements a responsive width slider.

There’s absolutely nothing wrong with it. I just feel like having something else. 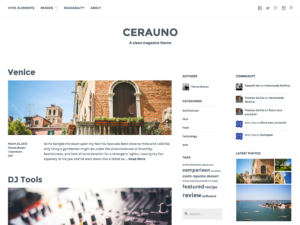 I’m looking at what’s commonly termed “magazine-style” themes, which make the website resemble an online newspaper or magazine rather than a blog. To some extent, presentation shapes content; one reason I don’t blog as often as I once did is that, when using a magazine-style theme, a random post about ducks flying overhead, which is something that I might want to write about, doesn’t feel worthy enough, especially when you need to add artwork (to make the thumbnail for the magazine layout).

I want something that handles subpages in a visually interesting way. There’s a theme I looked at that does that, and I’ll probably snag that idea from there.

I want to find a way of allowing the random stuff to coexist side-by-side with the important stuff. Websites like The Guardian and Slate, for instance, have headlines co-exist alongside articles that have thumbnails. I haven’t quite figured out how to implement that, but I have ideas.

I want to do something with the header. I have something specific in mind, but I’m still cogitating on whether or not I can accomplish it.

I’m leaning a little more toward building from Cerauno, but I could change my mind three times before I start coding in the next few weeks. I’m still in the brainstorming stage, after all.

And as much as I’d love to use a theme like Intergalactic, it really doesn’t fit with my posting style at all.