As was my Halloween tradition, last night I watched a Dracula movie, specifically Hammer’s Dracula Has Risen from the Dead.

The fourth film in Hammer’s Dracula series, and the third that starred Christopher Lee as Dracula, Dracula Has Risen from the Grave sees Christopher Lee’s Dracula seek his revenge on a monsignor who had traveled to Castle Dracula and sealed it with an exorcism and a golden crucifix by seducing the monsignor’s beloved niece and transforming her into his latest bride. 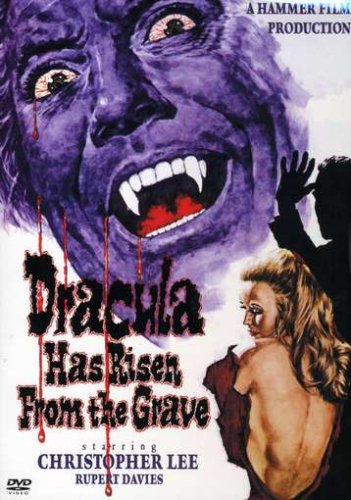 Overall, I thought Dracula Has Risen from the Grave was good. The story was fairly straightforward, the cast wasn’t too large to handle, we spent enough time with several of the characters to make them feel like characters, and the film’s leading ladies, Veronica Carlson and Barbara Ewing, were quite stunning. The conclusion seemed contrived, and I’m still unclear on the geography of the film (something that goes back to Horror of Dracula, the first of the Hammer Draculas), but those are minor quibbles. Who doesn’t want to see Christopher Lee gurning as he’s impaled on a giant crucifix?

Last night, in my dreams, I watched another Hammer Dracula, this one the mid-70s film, The Long Night of Dracula, better known by its American title, Dracula in Space, which I had never seen before.

To be clear, there is no such film. I simply had Christopher Lee’s Dracula on the brain.

In the far-flung future year of 2014, William Van Helsing (Peter Cushing), a veteran of the Saturnian Expedition is the commander of Moonbase UK-1. Shortly after the sun sets on the moonbase, plunging the base into a 14 day long night, an accident with Dracula’s signet ring (for inexplicable reasons an heirloom of one of the members of the crew) resurrects Dracula. And the vampire begins to prey upon the crew of about 100, and he has two weeks to feed until the sun rises again…

One of the setpieces came about fifty minutes in, when two of the crew, one man, one woman, have to leave the base and walk across the lunar surface to replace a fuse on the radio transmitter. The female crewmember, whose name I can’t remember, sees bare human footprints in the lunar dust, and as they pass a rocky outcropping Dracula, not in a spacesuit (he’s undead, so the lunar conditions can’t kill him) attacks them, killing the man (he rips the helmet off and feasts on his blood) and then hypnotising the woman.

Dracula was dispatched by trapping him in the base’s gardens, then the lights (which generated “pure solar radiation”) were turned up to maximum, incinerating Dracula “with the light of a dozen suns.” The signet ring was put on a message rocket and, instead of being fired at Earth, it was shot into the sun, with William Van Helsing saying, “Dracula has died his final death, and the world will forever be rid of his evil,” but the final shot has Dracula’s disembodied voice laughing menacingly.

The film vacillated between cheesy and lurid, something like a cross between a classic Doctor Who “base under siege” story and Barbarella, with Dracula grafted on. I was entertained by the film, but it was also pretty stupid at times.

I’m not sure why I had this dream, maybe because I’d just watched Dracula Has Risen and listened to, a few days earlier, BBC Radio 4’s The Unquenchable Thirst of Dracula (which is very good and quite lurid). The dream was quite vivid, and when I woke up I was disappointed that The Long Night of Dracula doesn’t actually exist. It should have. Maybe, somewhere in the multiverse, it does.