On Halloween, I explored a little of a cemetery near my apartment with the intention of going back.

Last weekend, temperatures in Pennsylvania soared into the low 70s, so I trekked over to explore some more. For some reason, exploring cemeteries is something I like to do. My mom says I take after my grandfather in that regard.

The cemetery, the Susquehanna Memorial Gardens, is off Cherry Hill Road, but if I hiked down Oak Road (which I drive every day to go to work), then cut across Fruitlyn Road (a mostly paved back road) I would enter the cemetery from the back.

The cemetery seems to be fairly new — like within the last twenty years new — and it’s a cemetery without tombstones. Rather, graves are marked (and, in many cases, well in advance of death) by copper slabs that are flush with the ground.

I shot over a hundred pictures. I’ve whittled them down to about forty. There’s no story here. I’ll present the pictures with some occasional commentary.

This is Oak Road. My apartment complex is under the water tower. You can see that water tower from miles away. There’s even one point along I-83 near Glen Rock where I think you can see it.

This is the masoleum. There’s no fence along Fruitlyn Road; you can just cross the grass and enter the cemetery grounds.

You can see the fire observation tower above Red Lion. This is in the general direction of the Weis Market shopping center.

Standing at the front of the masoleum, you can see the Greek-like temple structure I explored in October.

There are a number of signs like this throughout the cemetery. Some are numbered, some are not. I’m not sure what they mean. Are you supposed to catch them all, like Pokémon?

People have decorated the graves of their loved ones for Christmas. There are wreaths, trees, lawn flags, stuffed animals, and the like. There will be more.

A Jesus statue. There will also be more of these. This cemetery is more explicitly religious — and Christian — than any of the others in the Dallastown area, and that’s including the Methodist and Catholic cemeteries.

There were a number of recent interments — as in, within the last seven days — at Susquehanna Memorial Gardens. I counted six. They were generally very obvious — car tracks in the soft grass, benches graveside, sod that had not set, the piles of flowers. Sometimes I sat down on the bench, looked up the name in Google, and found the funeral notice.

I had to think about what I was seeing here, and then I realized — this grave was marked to be dug out imminently.

The veterans momunent. The graves around it are, naturally, for veterans of the armed forces.

Another Jesus statue. I think this is meant to be a representation of the boy Jesus impressing the Jewish scholars with his knowledge.

Dallastown can be seen in the distance. Dead center is spire of the Lutheran church.

Dallastown again. To the right is the Lutheran church. To the left, the spire of the Methodist church. I had to go higher to get this shot. I also took one that had the Catholic church as well, but its spire isn’t distinct. 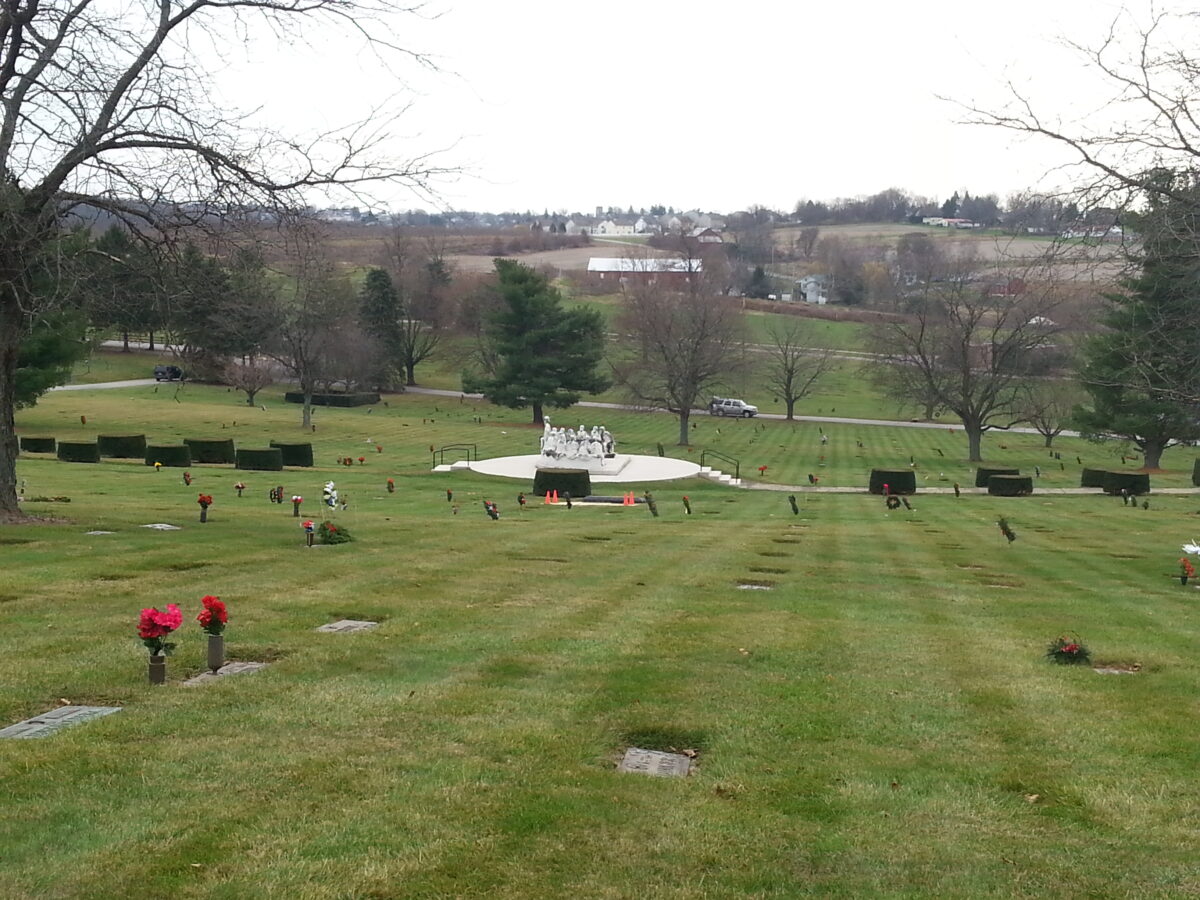 Across Cherry Hill Road is a house/compound that really lights up for Christmas. I suspect you can see this compound’s lit lights from orbit. That‘s how bright it is. This is how it looks during the day.

The Last Supper, I think.

John the Baptist and Jesus. Behind it is for interring cremations.

I liked this image of the masoleum, the clouds, and the light.

After this, I walked back home. I cut through the orchard we saw back at the beginning of this photo essay.