Spring has been oddly slow to arrive this year.

This was the third nice weekend of the spring, and on Saturday I drove down to Baltimore so I could poke around Loudon Park Cemetery, where my great-grandfather, among others, is buried.

I had two goals. First, I wanted to clean out the flower holders at my great-great-grandmother Susan’s grave. I had examined them the last time I was there, in August, and left flowers, and even then there was years of leaves and grass clippings and detritus in there. And second, I wanted to locate my great-grandfather’s brother Arthur, whom I’d been unable to locate (though, on my first visit there in almost two decades back in May, I’d found a brother, Maurice, I didn’t even know was there). 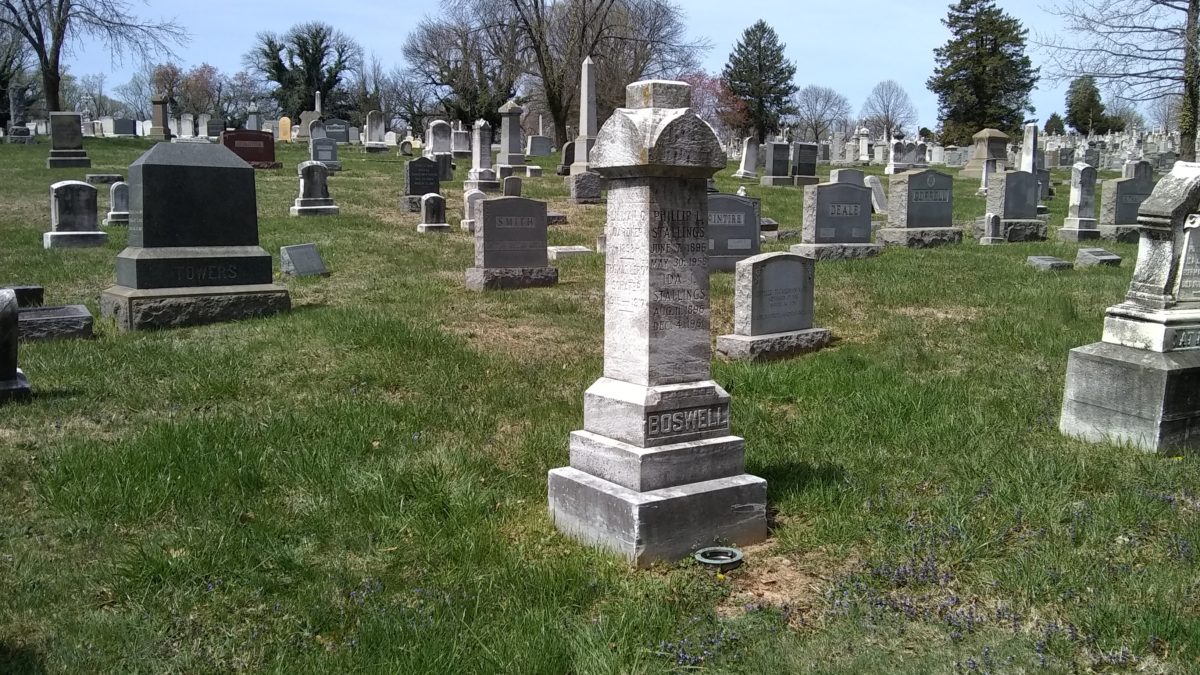 Of cleaning the flower holders, there’s very little to say. The Boswell monument, where my great-great-grandmother Susan Gardner is buried, has flower holders on both the eastern and the western sides of the pillar. In August I found there were coffee cans, very rusty and old, in both, and they were still there. I put on rubber gloves, extracted the cans, and began scooping out what was down in the flower holders. With the flower holder on the eastern face of the Boswell monument I was able to clean it out down to about a foot. On the western side of the monument, I could only go about eight inches due to the part of the coffee can I could not extract because it was embedded in dirt. Had I something that I could have used to chip away at the dirt and free the bottom half of the coffee can I would have, but I didn’t want to damage the can. It’s an artifact of sorts, left at some indeterminate point in the past, by some unknown person who knew or loved or remembered the people who were buried here, and I had no right to destroy it by trying to remove it. When I finished, I put the two cans, rusty and old, back in the flower holders, tied up my garbage bag, and planned my next step — locating Arthur Gardner.

The information I had for Arthur’s location wasn’t entirely helpful. “He’s on the other side of the cemetery” — okay, the other side, from where? Loudon Park is 350 acres. “He’s by the railroad tracks,” was the other bit of direction I got, but that didn’t seem helpful, either. The railroad tracks run along the southeastern edge of Loudon Park — while at my great-great-grandmother’s grave I can watch the Amtrak go by (and it’s occurred to me that, if only I’d known to look, I could have seen her grave from a speeding train in years past) and I will wave at the passengers as it goes — but there’s a lot of sections along the tracks to explore, and then there are sections that aren’t adjacent to the tracks but are still “by the railroad tracks.” In short, I didn’t see “by the railroad tracks” as particularly limiting, and in August I’d gone looking in the sections that were adjacent to the tracks, notably YY, U, R, and RRR, and turned up nothing.

Therefore, I decided, I would tackle two sections “by the tracks” that weren’t adjacent — RR and Whatcoat. Whatcoat, named after Baltimore’s Whatcoat Methodist Episcopal Church (now a Baptist church), whose cemetery was relocated to Loudon Park in the 1870s, was itself named after Richard Whatcoat, an early Methodist Bishop during the early years of the Republic. And RR, the section across the access road from Whatcoat. Standing at my great-great-grandmother’s grave, looking across into RR, the railroad tracks’ fence loomed in the background, beyond the graves and edged by trees ready to bud. 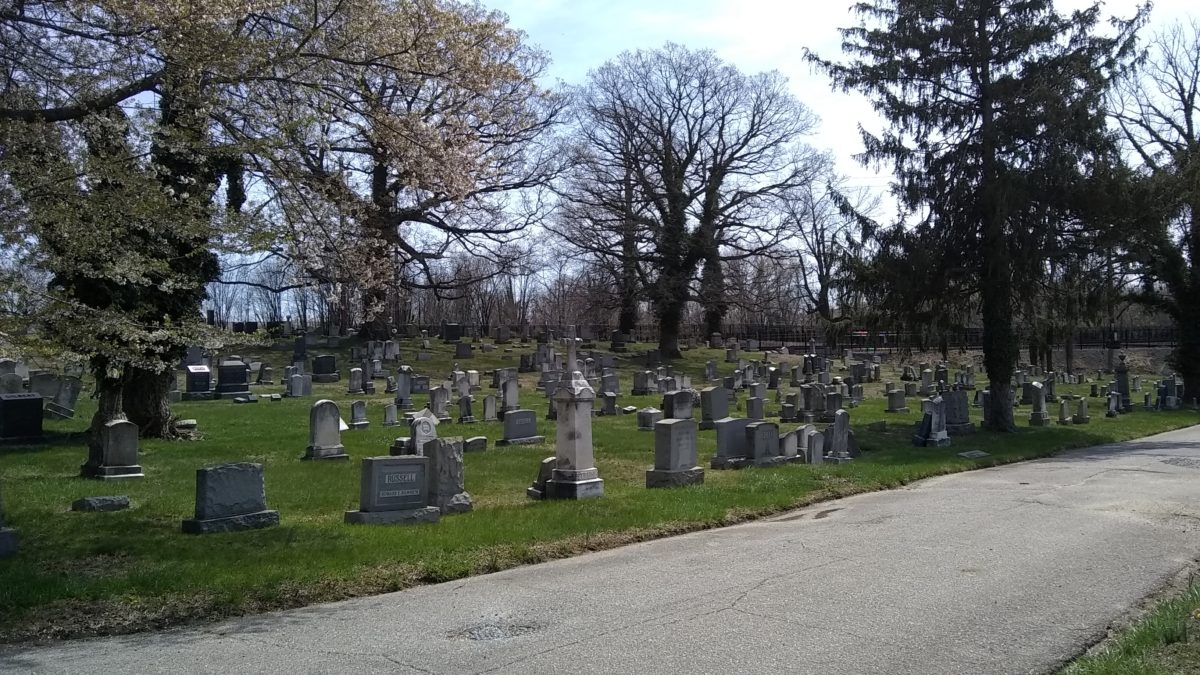 I should note that RR does not run adjacent to the tracks. While it’s not visible from that vantage point, there’s an access road between the graves and the tracks. Where the headstones seem to end, it’s because that’s the top of a hill, and on the other side is a one lane road, and then there’s an embankment to the fence and the tracks. What looks contiguous here is merely an illusion.

I had Arthur found within ten minutes. 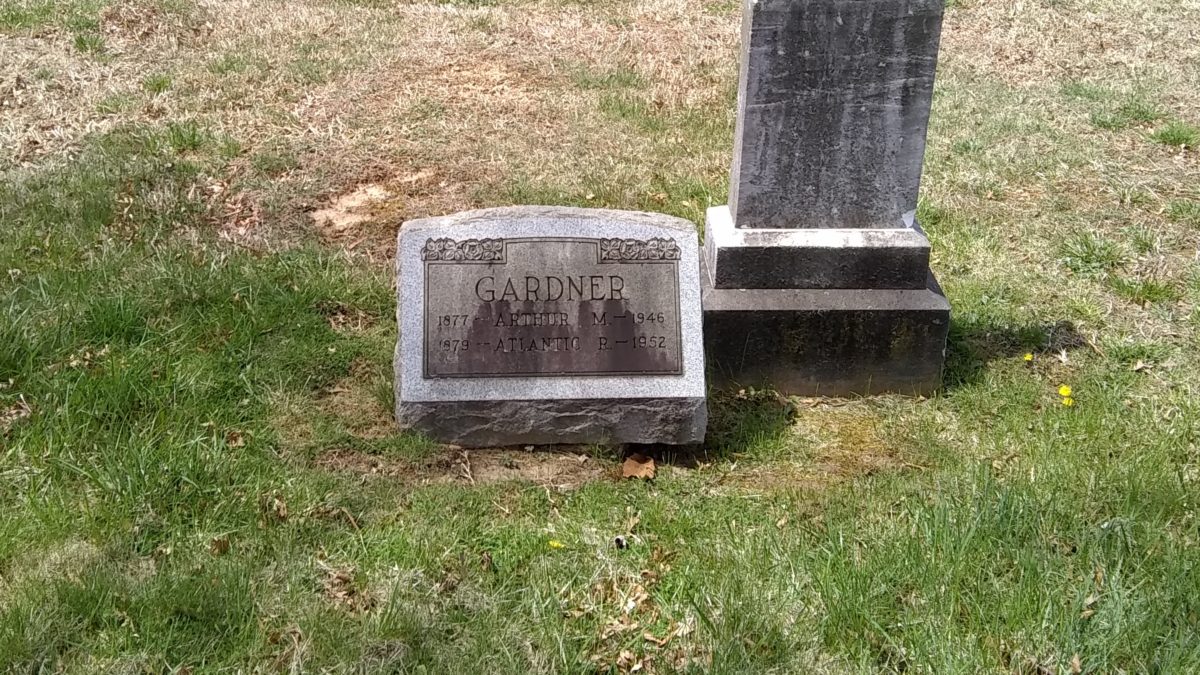 Even then, I almost missed it. There was an American flag, of the sort you see adorning graves in cemeteries, laying on the ground to my right. I bent to pick it up and continued going, only realizing after I’d gone a dozen feet that I hadn’t looked at some headstones to my left.

Arthur and his wife Atlantic had eluded me… but no more!

I know very little of Arthur. Like his brother, my great-grandfather, he was born in Washington, DC in the 1870s. He and his wife Atlantic had a number of children, all of them apparently daughters. He died before my mother was born. He is essentially a name, beyond living memory.

At this point, of my great-grandfather’s siblings, I have only three more to locate: William Gardner, Henry Hardy, and James Gardner. James appears to be in Leesburg, Virginia. I’m not sure where to begin with William and Henry, though. Both men appear to be dead by 1902, and William may have died in the late 1880s. (I had thought that William died in Washington in the mid-1880s, but he appears in one Baltimore City Directory, I think the 1886 edition. I’ll have to consult my notes.) And I know that Henry lived in Baltimore, but he seems to vanish from the records, or I don’t know which ones to look at.

I have to be honest, I didn’t expect to find Arthur’s grave within sight of his mother’s (and, for that matter, his sister’s, as my great-great-grandmother Susan is buried with her daughter Isabelle). 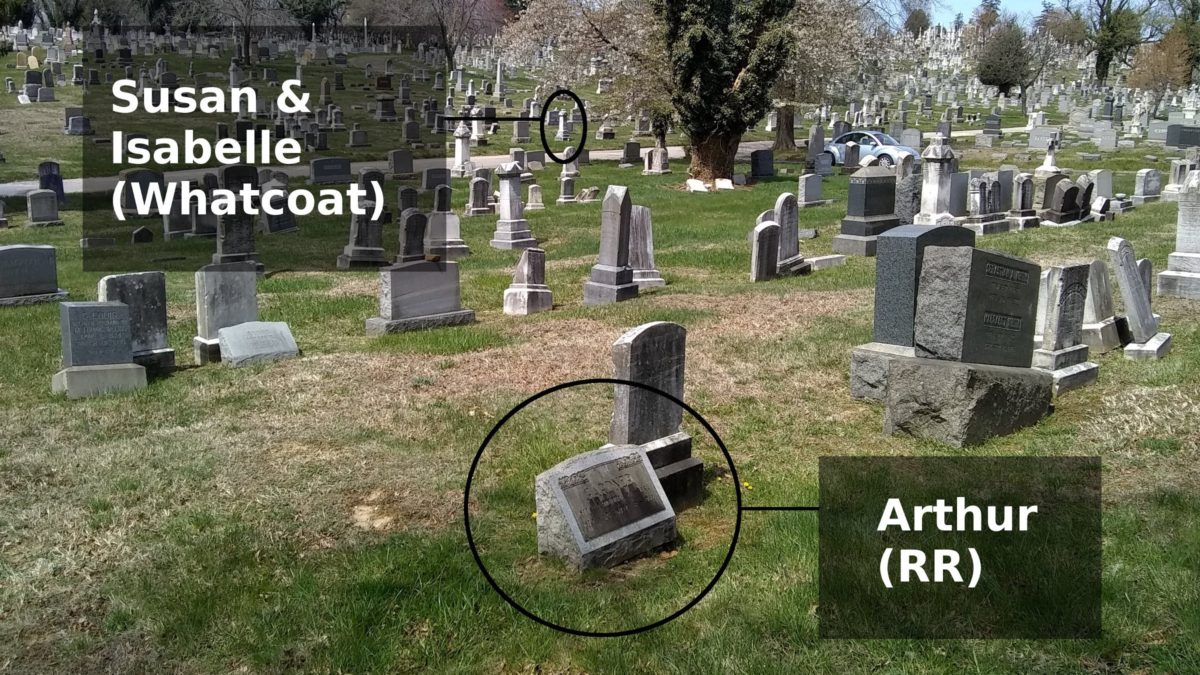 Once I returned home, I went through photos, both new and old. For instance, the photo above, with the fence in the background, shows Arthur’s grave, though I wouldn’t know it for another ten minutes. 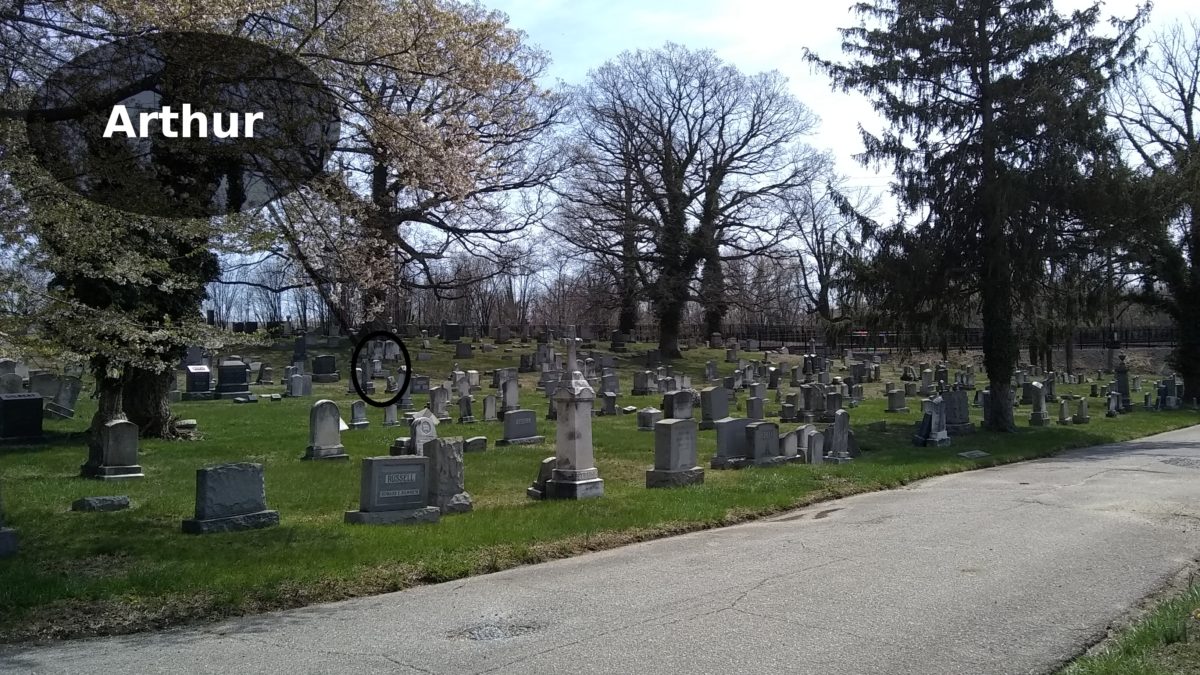 I’d even taken photos of Arthur’s grave in May, when I first visited Loudon Park. I didn’t realize it at the time, yet now that I know where his grave is, it’s unmistakable.

With both missions accomplished — flower holders cleaned, Arthur Gardner located — I decided to wander the cemetery. 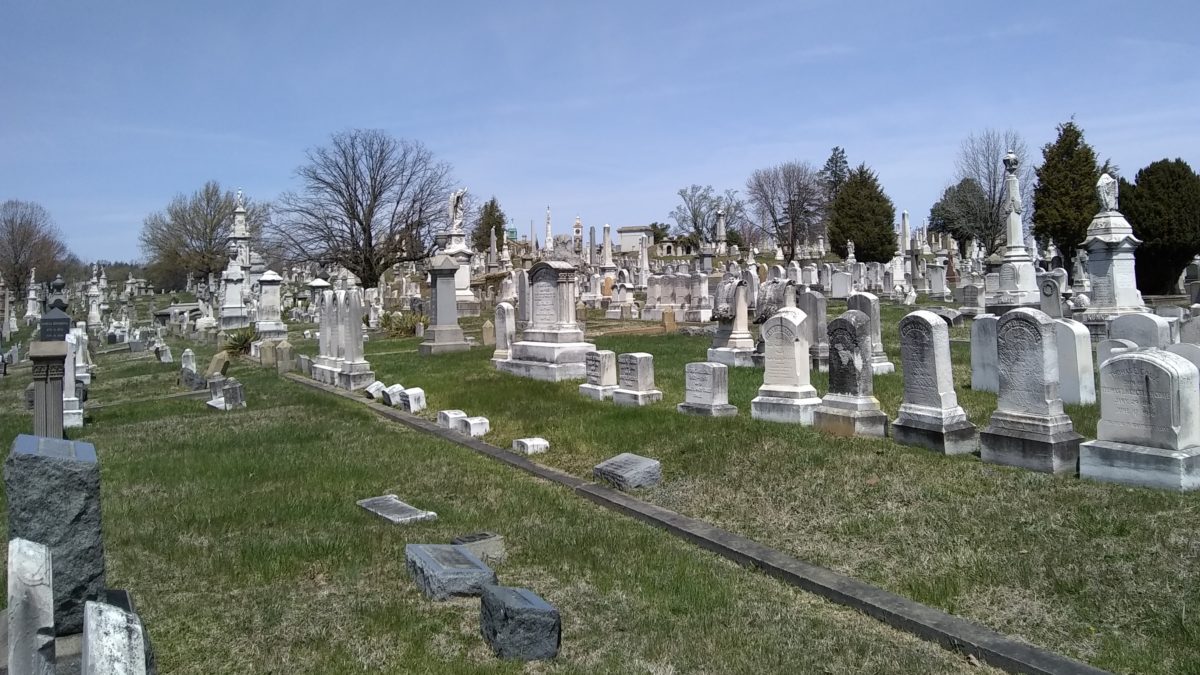 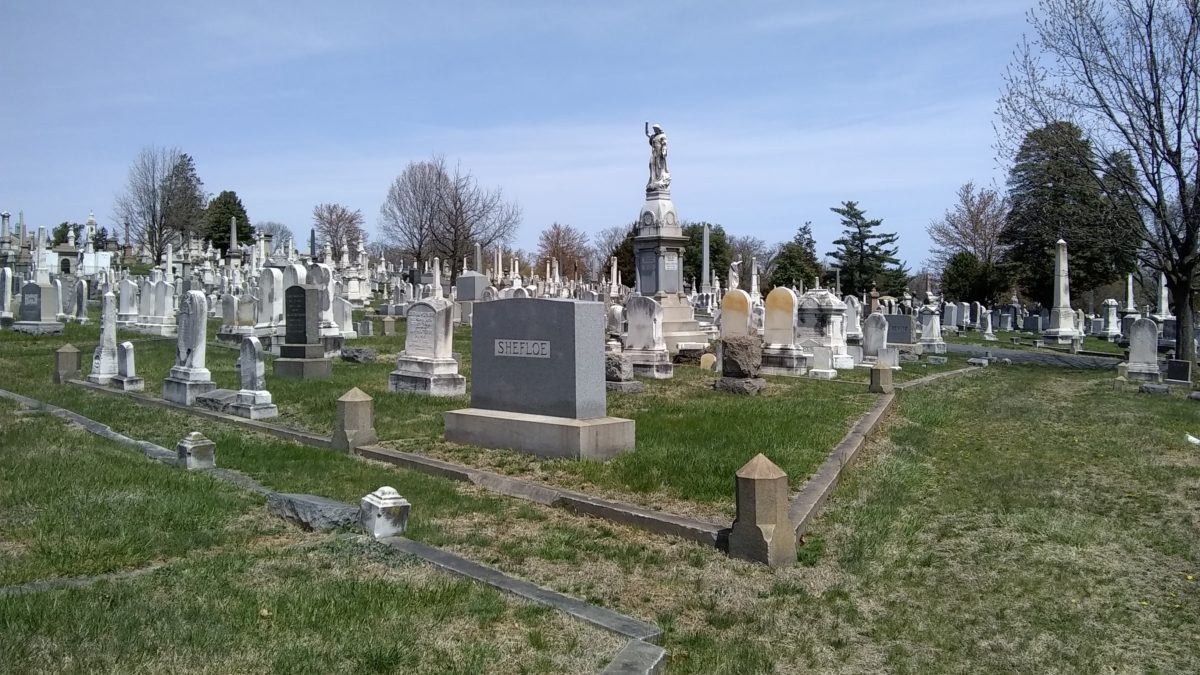 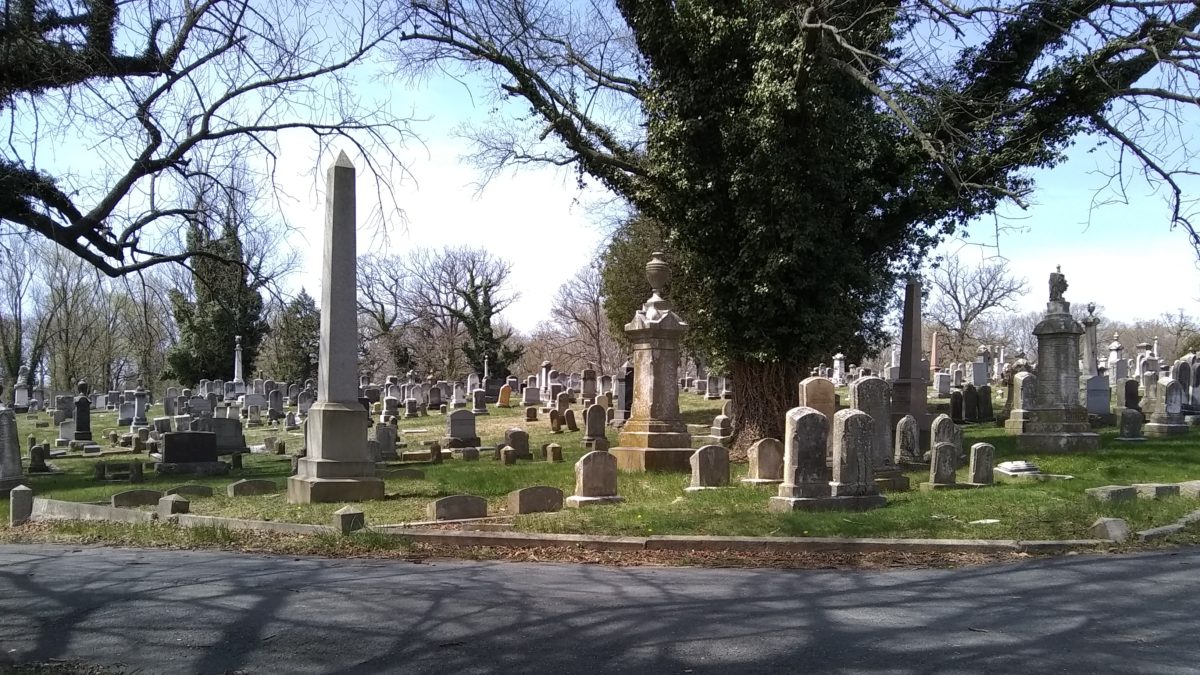 One of the most remarkable sites must by the Wiessner memorial. It stands three storeys tall.

They were a family of prominent brewers in the mid-19th-century. 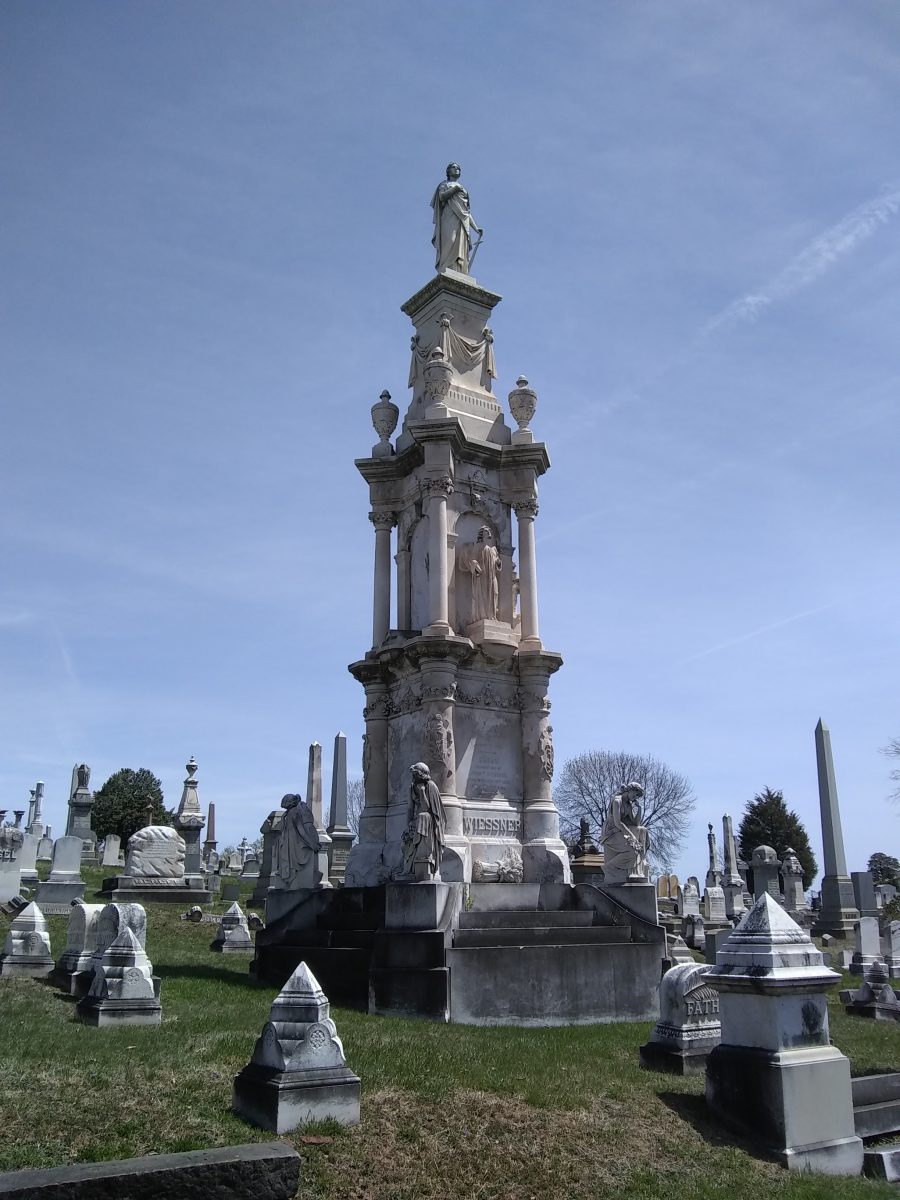 That whole area of the cemetery is packed. The headstone and monuments are old, worn, some of them broken. One could spend every day for a year there and not even scratch the surface. 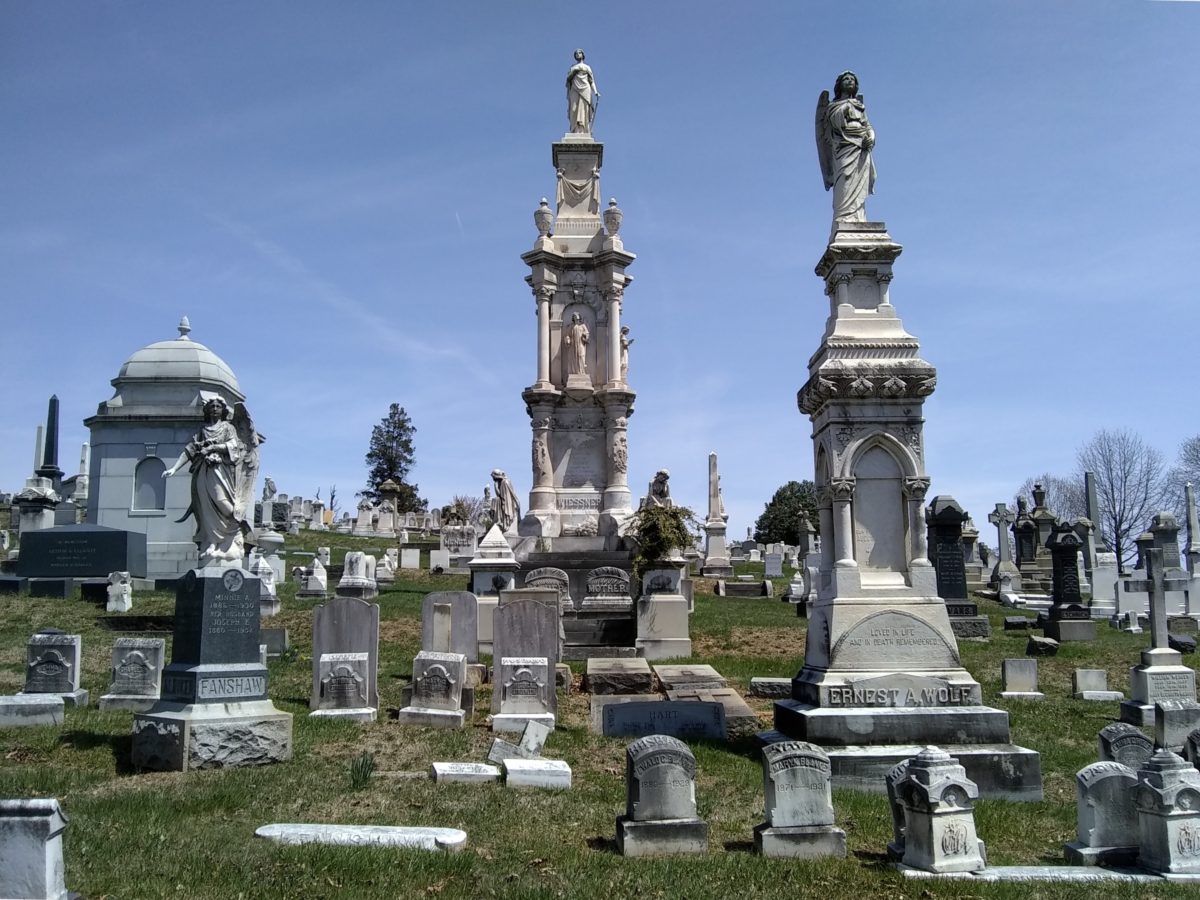 There’s history in cemeteries. I saw someone describe them on Twitter as, essentially, “a living archaeological dig.” The surface details tell you something about the culture and times. You can tell who had money from the elaborateness of the memorial. You can tell the age by the style and the script. All you have to do is take a look.