A week ago browsing the local Waldenbooks while in search of Keith R.A. DeCandido‘s novel Dragon Precinct I discovered that a novel based on the video game, Gauntlet: Dark Legacy had been published by iBooks, written by Richard C. White, entitled Paths of Evil. Dragon Precinct hadn’t arrived yet, or hadn’t been shelved yet–one can never tell with this Waldens–and looking for a lightweight, diverting read, I bought Paths of Evil.

Gauntlet has always been essentially a dungeon crawl, a graphical take on the genre pioneered by Rogue, Angband, Hack, and NetHack on computers everywhere. There’s not a story to Gauntlet, per se, merely a number of areas the player must visit, enemies to vanquish through brute force, and treasure to plunder. See an enemy, fight an enemy.

Gauntlet isn’t a game I would have thought particularly well-suited to the novelization treatment, any more than NetHack would suit the novel format–the story would be a travelogue of the character’s journey into many unconnected areas without the benefit of a developing plot to provide context. Some games in the dungeon crawl genre do have the benefit of a storyline–the two Baldur’s Gate games and Lord of the Rings: The Return of the King come quickly to mind. 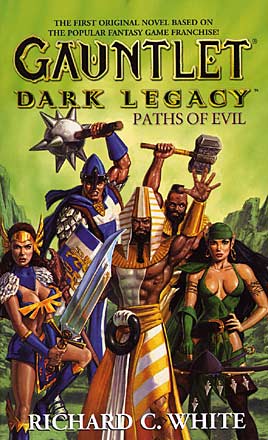 The most recent version of the game, Gauntlet: Dark Legacy puts the barest of story outlines on the concept, as stated in the game’s opening narration: “In an ancient time the evil mage Garm, using the power of the Runestones, released a great evil upon the land. This demon, Skorne, broke free of Garm’s control, crushing him and imprisoning his soul in the underworld. Skorne then released his minions upon the lands and scattered the Runestones across the Eight Realms so that they might never again be assembled and used against him. No one has dared try. Until now.” Yet character development consists solely of improving various RPG-esque stats such as speed, strength, charisma, and story development is non-existent. See an enemy, fight an enemy, still.

Does this translate well into a novel?

Paths of Evil begins with an interesting premise–the Eight Realms are actually different worlds rather than parts of the same world, and in ancient times a benevolent empire ruled over them through portals that connected the worlds. (I’m thinking Iconian Gateways here.) But evil forces took control, the benevolent empire fell, and the methods of connecting the worlds were lost.

Why is this an interesting premise? It compacts the storytelling needs. In Gauntlet you have a desert world, an ice world, a castle world, a forest world, to say nothing of the Funhouse world, and the player-character has to journey to each of these worlds in search of the fabled Runestones. If these worlds all existed in a single place, the character would spend gobsmacking heaps of time just travelling from one place to another. By using the portal system, the character can instead go directly from one to the other. The game uses the same premise–the character journeys through a portal in Sumner’s castle to reach the various realms, and once the mission is complete, the enemies vanquished, the treasure plundered, he returns to Sumner’s castle to journy onward to the next realm, so there’s precedent for the book to use the idea.

Unfortunately, Paths of Evil takes the game’s premise too far literally. Characters journey to a new area, fight monsters, take their treasure, and move on to the next area. This isn’t White’s fault–it’s exactly what one does when playing the game, but it makes for dull reading. The writing itself is fine, and the characters in the adventuring party are pretty well characterized. Save for the portal concept, though, Paths of Evil could be a fantasy novel in a generic setting.

Oh, and as with Gauntlet: Dark Legacy the game, Paths of Evil doesn’t end. The story just stops. I presume the book is the first in a series, probably a trilogy. It’s a diverting read, it’s a long read, but in the end it’s a fairly generic fantasy novel. If you really like Gauntlet there might be enough here to justify picking up the novel.

One thought on “Gauntlet: Paths of Evil”