Four years ago today, I made an interesting discovery — the text of Ellery Queen’s lost lost 1944 Sherlock Holmes anthology, The Misadventures of Sherlock Holmes, was online.

It had been posted sometime before that — the webpage says 2007 — but the day I downloaded the PDF, a scanned edition of the third printing, was January 18, 2010. I also downloaded the TXT file, which proved to be an OCRed version of the PDF.

The Misadventures is legendary for what it is and why it vanished. What is is — a collection of Sherlock Holmes parodies and pastiches to 1944 by writers both famous and not. Why it vanished — supressed by Sir Arthur Conan Doyle’s estate for reasons of copyright infringement on Sherlock Holmes.

When I found the PDF, I printed off a copy of the book — four hundred pages, bound in bundles of 100 pages each in binder clips. I didn’t read the whole thing, I’m sad to say, but I read a great deal of it. (I know I skipped the Mark Twain story, “A Double Barrelled Detective Story,” and probably several others.) 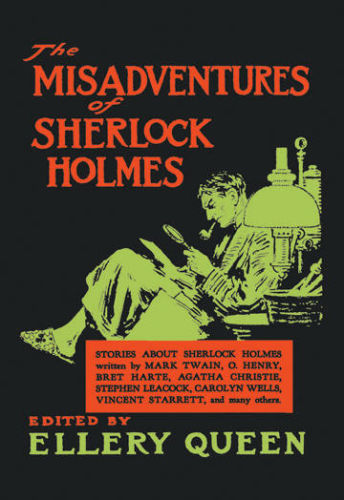 In general, I enjoyed the book, though, to be perfectly honest, subsequent collections, such as Marvin Kaye’s The Game Is Afoot, have rendered The Misadventures little more than an historical curiosity.

And I forgot about The Misadventures.

At New Years, I sideloaded Readmill onto my Kindle Fire. I like the Kindle Fire as a piece of hardware, but in software terms, it’s adequate. I don’t like its typography, and its inability to read ePub files is an issue. In December I’d seen several articles online that recommended a new piece of eReader software, Readmill, and I decided to give it a try. I liked it a lot. The software interface was nice, the typography was very good, and I actually enjoyed reading eBooks, probably for the first time in a decade-plus of reading eBooks.

Long ago, back in 2000 when Microsoft released their eReader software, Microsoft Reader, I downloaded the tools necessary to create eBooks for the platform. There was a plug-in for Microsoft Word that would export a LIT file (the Reader format), and it produced decent or adqueate results. There was a standalone package, though, that would produce beautiful results if you started from a really clean, well-formated HTML file. Over the years, I’d take a file from Project Gutenberg and make LIT eBooks from that. I actually learned a great deal about HTML and CSS from that, and eventually I produced, for personal use, some very nice eBooks.

When I got my Nook a few years ago, I downloaded Calibre, an eBook creation program, and I found that the files I’d created for use with ReaderWorks, the Microsoft Reader creator, worked very well with Calibre for making ePub files for the Nook. Then, when I got the Kindle, Calibre did a nice job making MOBI files for that. But I never made eBooks with any great enthusiasm.

Installing Readmill on my Kindle Fire got me excited about eBooks, in a way I hadn’t been in a decade when I first started playing with Microsoft Reader. I made a few eBooks as an experiment to see how they would look in Readmill, such as an ePub made from Andrew Sullivan’s “Untier of Knots,” his profile of Pope Francis.

But I wanted a bigger project.

And thus I came back to The Misadventures of Sherlock Holmes.

“Wouldn’t this be great on my Kindle?” I thought.

Thus, The Misadventures Project was born. I decided to take the files I had downloaded four years ago and make an eBook that I could read on my Kindle, either natively or through Readmill.

But the OCRed text file was rough. It needed a copyedit and proofing. It needed formatting. Basically, it needed a lot of work before I could sit down with my Kindle and read Ellery Queen’s anthology. Ninety percent of it’s already done thanks to the OCR, but it’s the last ten percent that will take time and effort. I’m taking each story from the text file, proofing it and formatting it.

Some stories require more work than others. The OCR software had a terrible time with italics, and words at the margins vanish or get horribly mangled. Dust on the pages the software treated as punctuation. Em-dashes, which are used so liberally by Ellery Queen that even F. Scott Fitzgerald would blanch, the OCR software did nothing with at all. One story involves an acrostic, two stories are playscripts. Deciding how to format these in HTML (which is how I’m working) so that Calibre can format them properly for an eBook is a challenge. Plus, I want to make an eBook that replicates, as well as possible, the formatting of the print book. I want to make something that looks and feels professional, like care went into it. When I’m done, I’ll stitch the files together, give them another proofing pass, build the eBook, and admire it.

Why? The Misadventures, as a whole, isn’t in the public domain yet, so I can’t sell it, and it’s an awful lot of work proofing four hundred pages.

Honestly, it’s for fun. It’s a project, one that hopefully will teach me some new tricks and will, in the end, provide me with an eBook I can read, maybe next month, maybe next year.

The Misadventures Project is a working blog, to track my progress and keep me honest. I started last week, and at this point I’ve proofed and formatted the introduction and the first eight stories. I’ve been averaging roughly a story a day, but something like “A Double-Barrelled Detective Story” will probably take two or three days due to its length when I get to it. I hope to be finished within a month. Yesterday I passed the quarter mark in the book.

As I go, I’ll post the stories that are in the public domain (those published before 1923), all told about fifteen stories. That would include stories such as:

I will also post excerpts that I find interesting and reviews of some of the stories.

That’s the plan for The Misadventures Project. As Sherlock Holmes might say, “The game’s afoot!”