Friday I took a vacation day.

Though long planned, for about five months, I needed the day badly; work has been mentally exhausting and physically draining this year, and with the never-ending publishing cycle of writing and deadlines I have always struggled to even take the minimum required five vacation days each year, and it’s been eight and a half years since I’ve taken more than two vacation days consecutively. In short, I just needed to get away from the office.

I wanted to visit Loudon Park Cemetery in Baltimore, to see how the cemetery was recovering since it flooded at the end of July.

I’d been about two weeks after that flood — I had something to do in Baltimore that weekend, and half an hour to Loudon Park wasn’t too much of a problem — and the area where my great-great-grandmother is buried, though not great, was open; the lake had been pumped out and potholes filled, but there were also toppled and broken headstones, not to mention a pervasive deadness; the grass along the facing hills of the cemetery was brown, not because it was encrusted with mud and sediment, but because it was dead. I left a flag at the grave — no time for clean-up of the gravesite, but there really wasn’t much in the way of litter and debris — and went about my business.

Friday, with more time, I thought I would have a more leisurely visit.

It’s a circuitous route through Loudon Park Cemtery to the Whatcoat section, when Susan Gardner is buried; the most direct route has been blocked off since July. I’ve now driven that circuitous route through the old part of the cemetery, past Confederate Hill and the Weiskittel Masoleum and near the three-story Wiessner Monument, enough times that I could probably navigate it in my sleep. I didn’t expect to find the access road down to Whatcoat to be roped off, and yet it was.

The cemetery had flooded again, quite recently. The road between Whatcoat (where Susan is buried) and RR (where her son Arthur is buried) had buckled and collapsed. I had to park at the end of Whatcoat and walk in.

The flag I had placed at the grave a few weeks ago — Susan’s granddaughter was married to a World War I veteran, and both are buried at the site — was intact and caked in mud. The base of the monument was also covered in mud and sediment, grass clippings and wood chips. There was trash everywhere, not to mention goose feathers. It broke my heart to see it this way.

I walked back to my Beetle, grabbed the trash bag and gloves I kept in the trunk for exactly this situation, walked back, and set to work cleaning up the site.

In the distance, I heard the sound of the trimmers and mowers of Loudon Park’s grounds crew. Several trains passed by on the tracks that edge the cemetery, the same tracks, sadly, that are a cause of the cemetery’s persistent flooding as they dam in the water.

I spent about ten minutes picking up the trash — cans, bottles, a nickel bag that appeared to have drugs in it, plastic sheet of cold medicine, even the styrofoam bracers used to pad electronics, like televisions or video game consoles, in the box so they don’t get damaged. The goose feathers I left alone. I worked a circle of about twenty feet around the monument, picking up the trash that litered my great-great-grandmother’s “neighbors,” as well. The grave of one of those neighbors, Emma Scheer, had caved in; her century-old wooden coffin, undoubtedly rotten through, simply couldn’t withstand the weight of the water-saturated earth above it and it collapsed, leaving a hole in the ground some five feet deep. I knew the woman below was long past caring, yet I still felt a touch of sadness at what had become of her resting place. Scheer’s grave was not the only one to collapse in the flooding.

Satisfied with my work, I planted a new flag and placed flowers in the flower holders on either side. The flag was large, 8-inches by 10-inches, I think. I’d stopped at the Giant on Wilkens Avenue to pick up some flowers, and I decided to see if they had any flags left, despite the fact that it’s after Labor Day and summer, at least in the retail sense, is over. They did, and they were on sale, and thus larger flag. 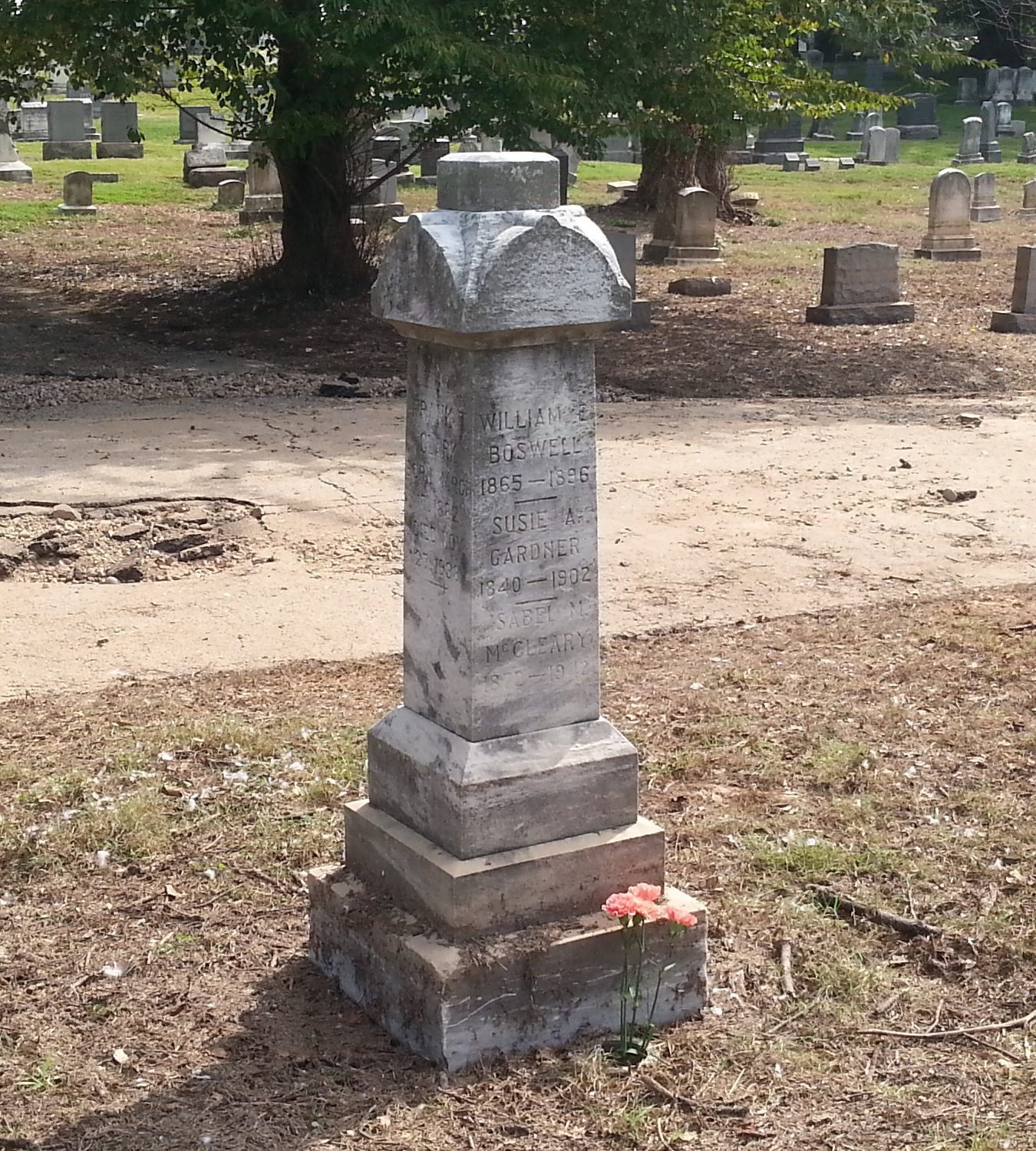 The water wreaked havoc on the access road. There’s a storm drain system that runs underneath the road, and it appears to be collapsing. When I located Susan’s grave last year, I parked along the edge of the road now. Now, even if the road is reopened, I’d be very reluctant to do so; I’d fear that the weight of the Beetle would crush the road. 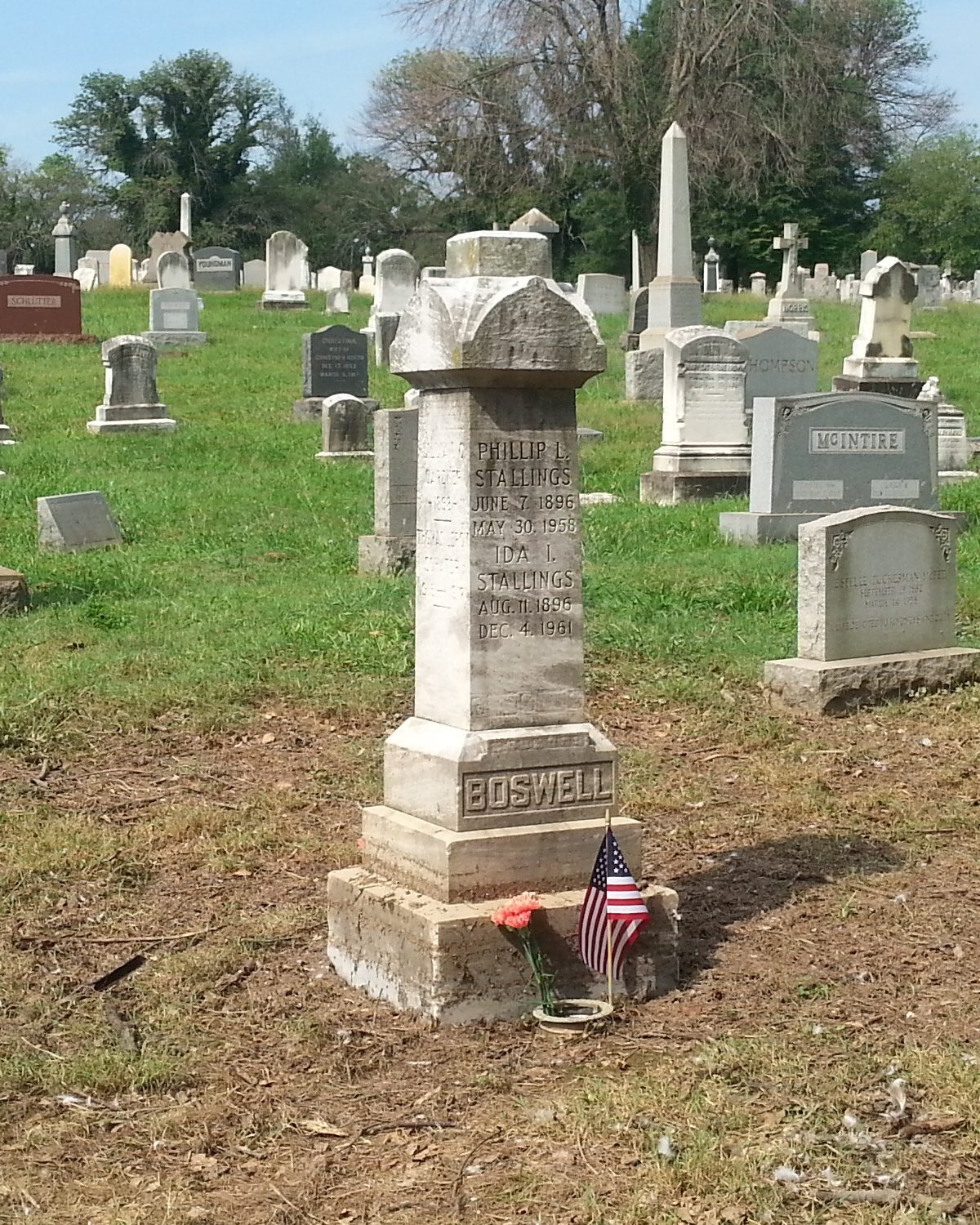 The flag and the flowers brought some color to a muddy and dead landscape. A little beyond my great-great-grandmother’s grave is the collapsed grave of Emma Scheer.

I’ve been trying to piece it together in my head since Friday, since I don’t recall much in the way of precipitation in late August and early September, just an occasional pop-up storm that lasts half an hour or so, though there was that storm at the beginning of September. It’s rained extensively since Friday morning, there’s another two to four inches of rain due to fall today, and Hurricane Florence in on its way. A week from now, this part of Loudon Park Cemetery will resemble the lake I found at the end of July. Friday morning, I expected to find something generally dry. Instead, I found a place that had been very wet, very recently.

The conclusions — hypotheses, really — I came to:

It was very sudden, almost like a storm surge. Rain came down, maybe in that storm that caused a mudslide on 83, hard and heavy. The road comes at the bottom of two hills, and there are storm drains at various points along the road. Water poured into the storm system as well as ran along the surface, downhill, toward the railroad tracks. The storm drain overloaded and, having nowhere to go, exploded upward through the road itself, pushing the water that was building on the surface backward up the hill, hence a surge out, carrying trash and leaving debris. Then, the water receded as it was pumped out.

It’s not readily apparent in this photo, but there’s a definite “peak” in the roadway that wasn’t there before and, based on the location of the manhole covers, it runs along the storm drain. 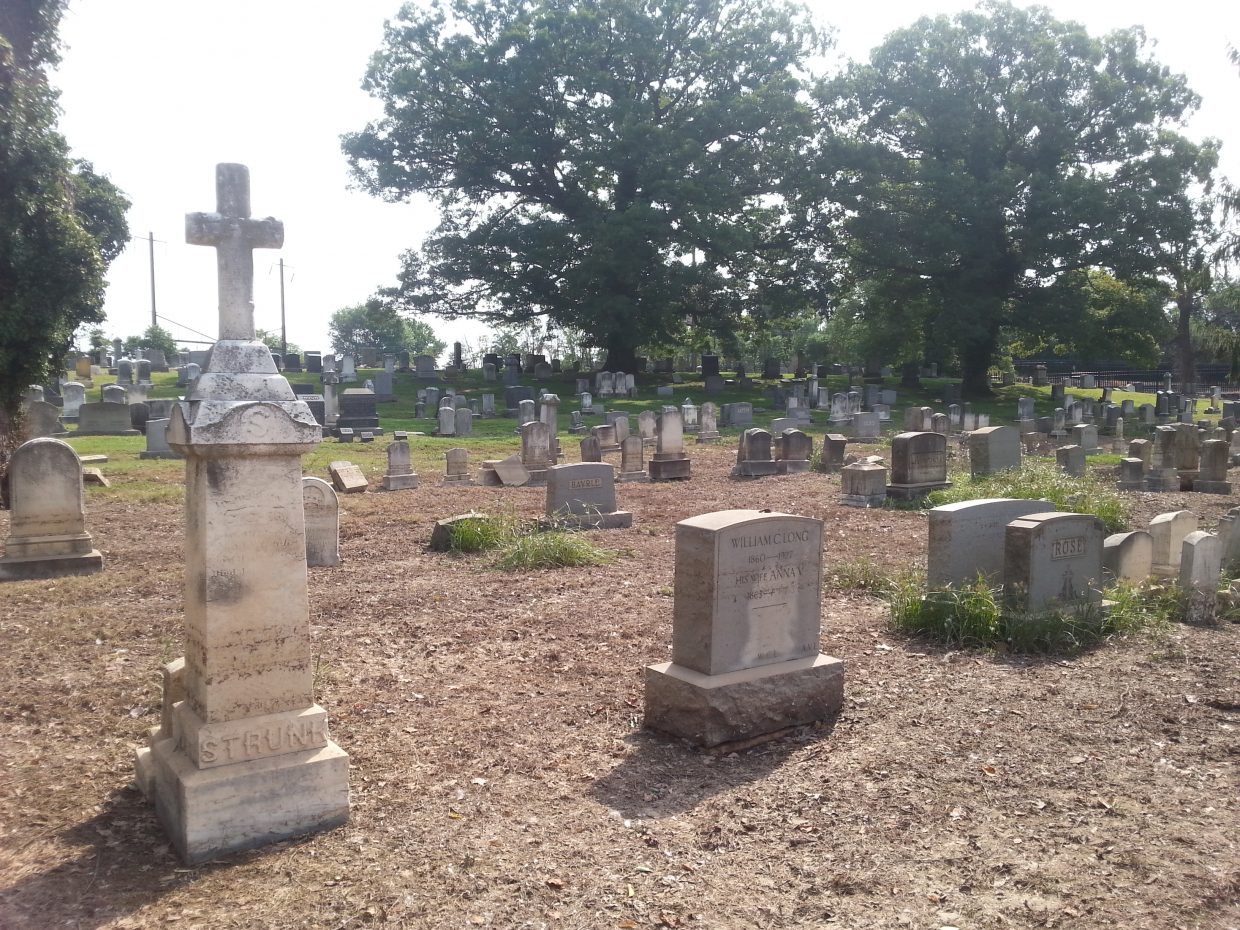 I wrote earlier of “the pervasive deadness.” I don’t mean the faint stench of death, of decaying bodies that lay over everything, though nowhere near as strongly as it did in June, but rather the dead grass where the waters of July’s lake had been. This grass isn’t matted down with mud. It was obvious, when I visited in mid-August, that the water had choked the grass and killed it, and the most striking thing was that two oak trees that had been in the water had shed their leaves entirely. In places, the grass is starting to grow back; there are little patches of green around my great-great-grandmother’s grave, for instance, and in some places new, green blades grow wildly. But, in the main, where the water had been is dead, barren and bereft of life, and there’s a clear demarcation between the places that escaped the floods and the places that did not.

I walked down the road. This was where I used to park. I had no idea where these stones had come from.

This headstone was covered in the stones. I have no idea if it even belonged here. It seemed unlikely; a year ago, this would have been the road’s very edge. (Edited to Add: After reviewing photographs from last year, yes, this headstone belonged here.)

The water had toppled and broken headstones. Or maybe some recovery efforts on the part of the cemetery had. No, more likely the water. As the tenth Doctor said, “Water always wins.” 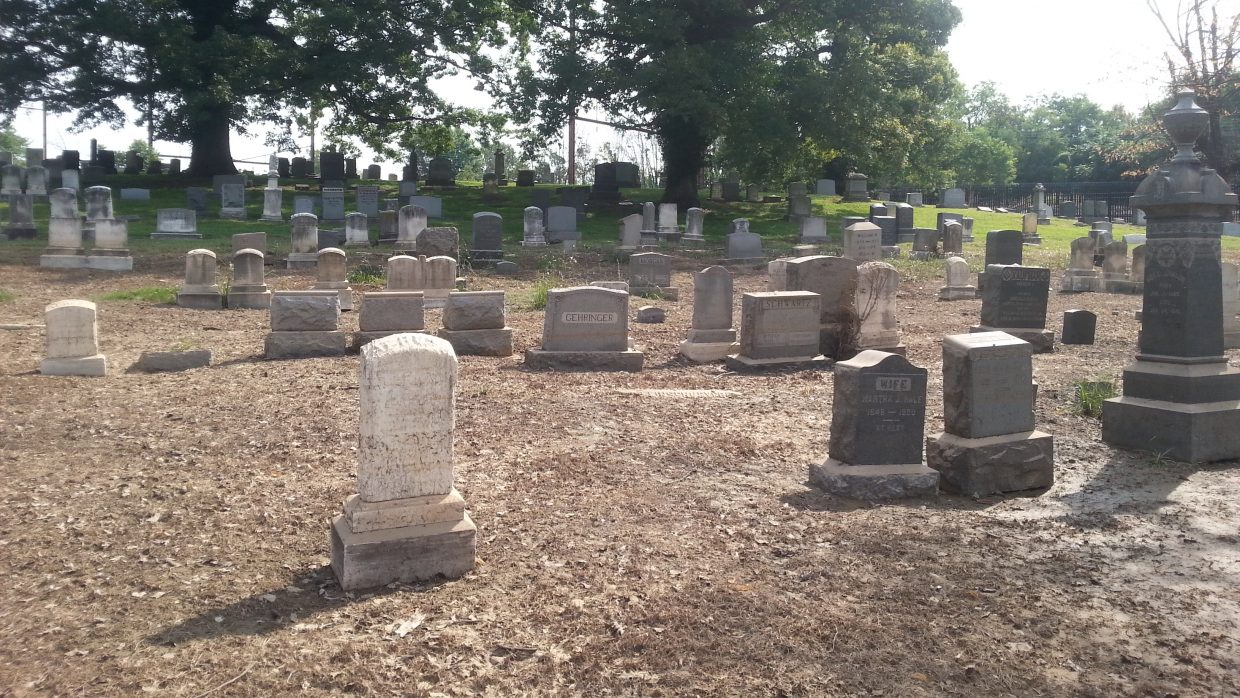 It was also much muddier here. 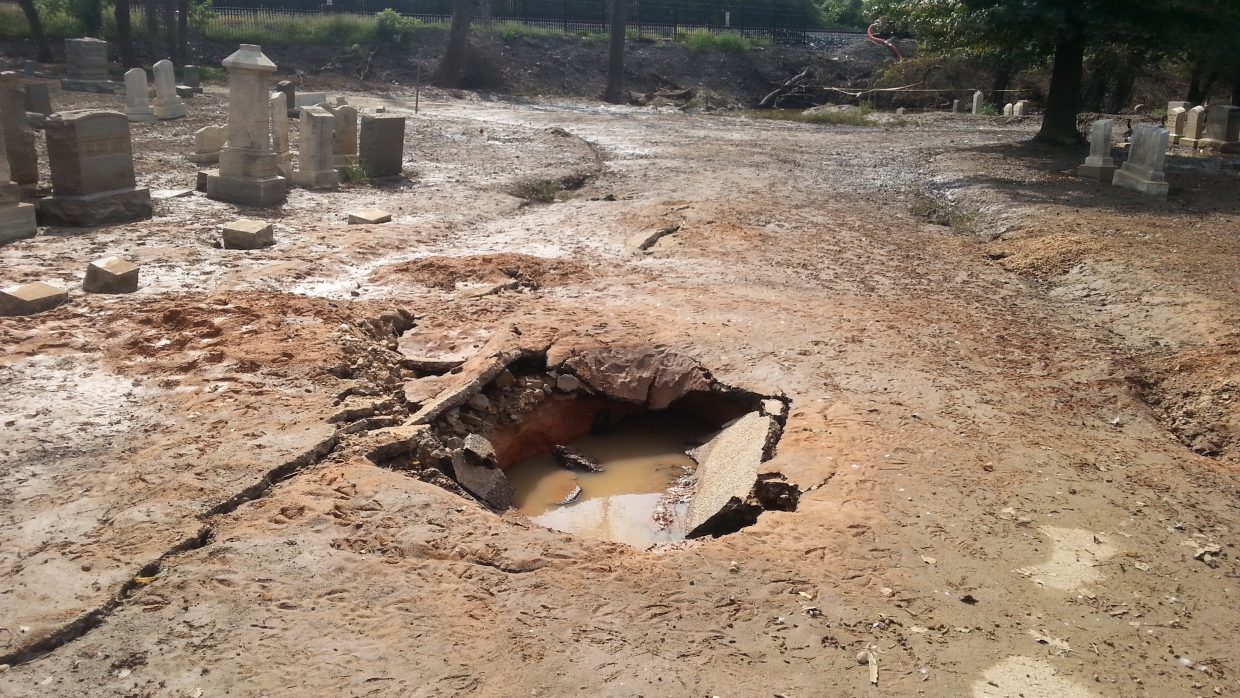 Here, the road collapsed entirely. The “peak” that I mentioned earlier is here, too; that’s the seam running through the road, intersecting with a manhole cover. It may not be obvious, but it’s there.

I continued onward, unwisely. It became very muddy very fast, and the mud was a good inch deep or more. I got past the hole in the roadway, my shoes sank into the mud, and I turned around as best I could. I didn’t even stop to think that the roadway, obviously unstable, could have collapsed while I was standing on top of it. As I said, unwise. 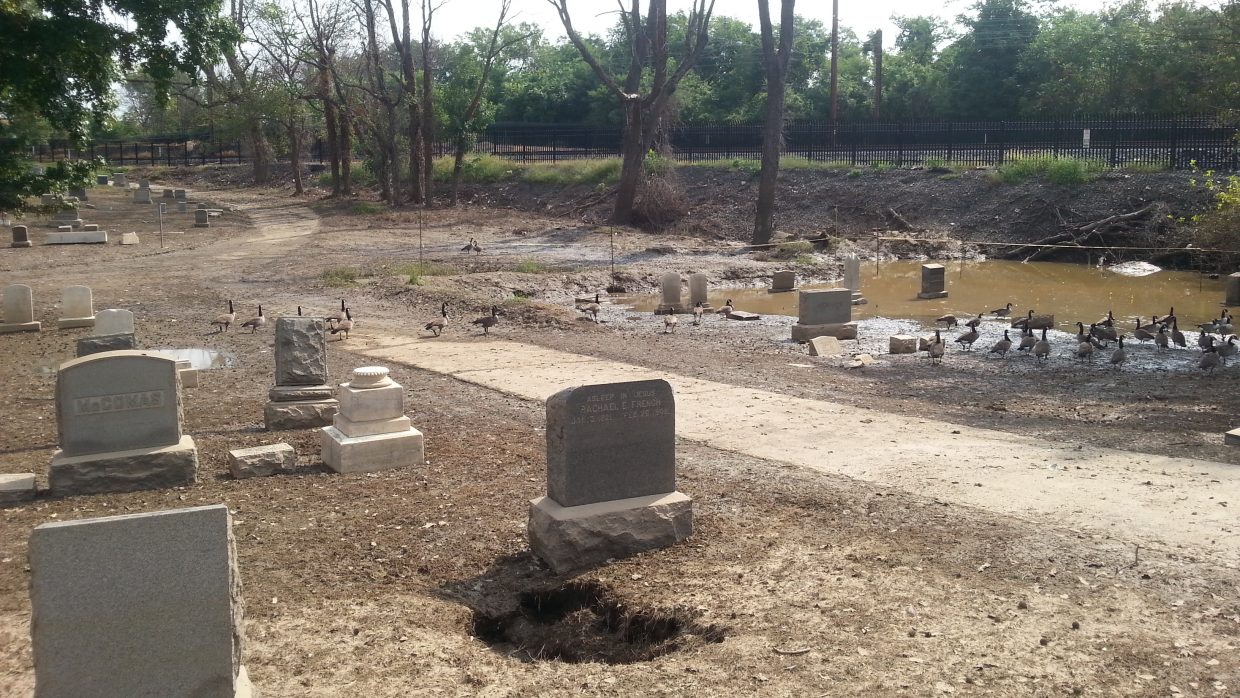 Geese gathered around the standing water at the base of the railroad tracks where twenty or so graves remained submerged.

Here was another collapsed grave, this one belonging to Rachael French. 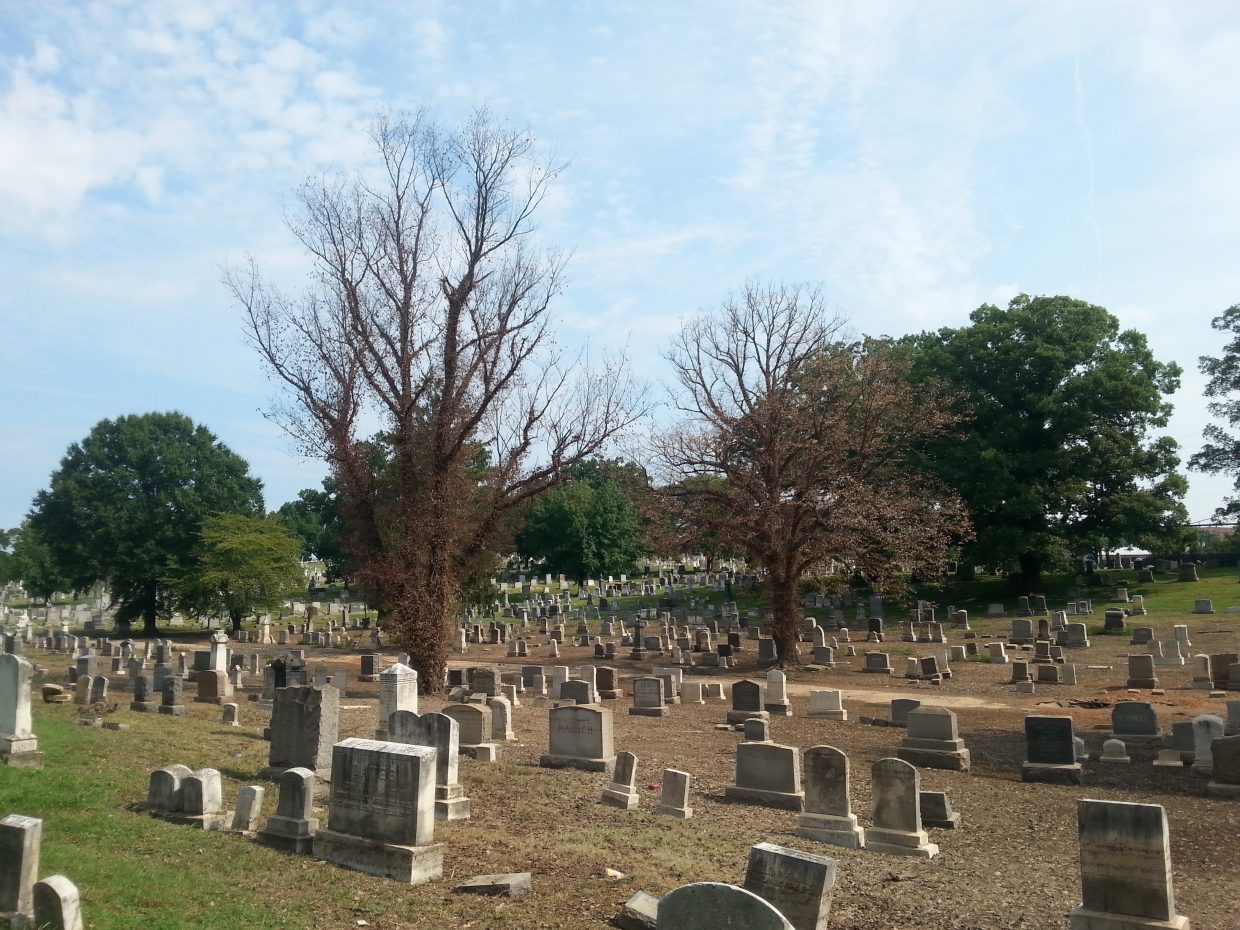 The two oak tress, rid of their leaves.

In some ways, it was unnerving to look at, to see all of this green around me — grass, plants, trees — and there, a wasteland of dead.

It was just as striking from the opposite hill, where Arthur Gardner is buried. Even without knowing what had happened, it looks like some great tragedy had befallen this cemetery. 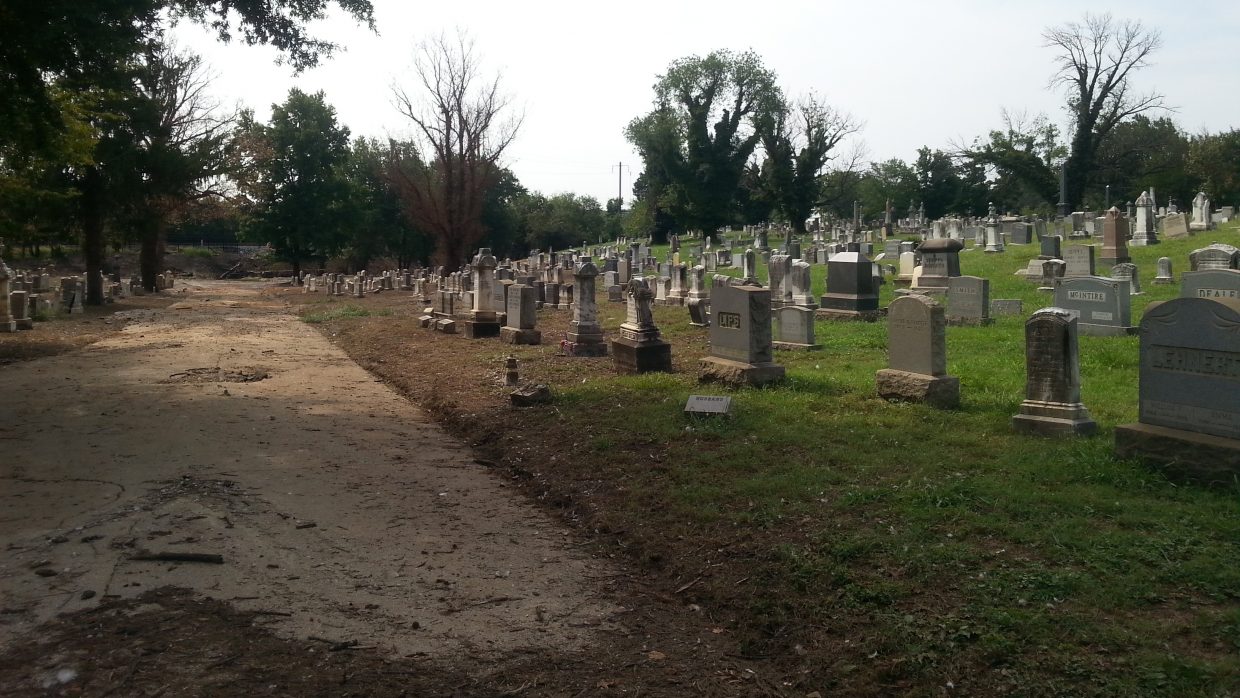 Nothing left to see or do, I took a last few photos and walked back out to the Beetle.

As I write this, it’s raining. It’s rained since Friday afternoon, just a few hours after I took these photos. It’s supposed to rain for the next several days. The next week, really. Loudon Park floods. Loudon Park will always flood. I know, without having to be there, that this part of Loudon Park Cemetery looks nothing like that, and I feel a little distressed about that, just as I felt in June. I tell myself that the dead are past caring, that my great-great-grandmother and the family she’s buried with are beyond living memory even, and even though I know there’s nothing I can do except to wait a few weeks and clean up after the mess, I still feel the need to do something.

But I know I did do something. I left a flag. I left flowers. I left a splash of color and life in this place of the dead, a mark of defiance against nature itself. No matter how high the water rises, no matter how deep the mud becomes, I did something and the flag, probably, will be there when I return.