I’ve written a fair bit about my cats. Let’s meet them, shall we?

The cat on the left is Woody. The one on the right is Leo, the one that disappeared not too long ago. I like the dishes they’re using. I bought them at World Market a few years ago as a peace offering to Tails. The dishes have a blue cat with wings as their pattern. 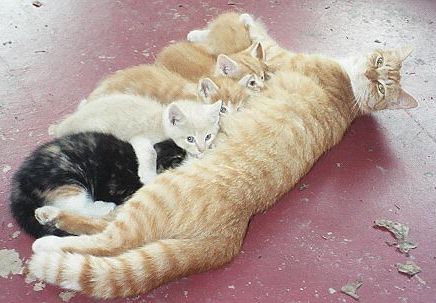 This is Cheddar, the neighbor’s cat, nursing her five kittens on my carport. I particularly like the way several of the kittens are looking up at the camera. I think it’s a nice shot. 🙂

These are two of the neighbor’s kittens, playing at the base of the wheelie bin. Okay, they’re not playing. They’re actually running from the madman with the camera. 😉

2 thoughts on “Meet the Cats”