John Kendrick Bangs was an American satirist in the Gilded Age and a contemporary of Mark Twain. He’s largely unknown today, and I wouldn’t know of him were it not for his Sherlock Holmes writings. He wrote several comic novels; one of them, A Houseboat on the Styx, features Sherlock Holmes in the afterlife after Reichenbach Falls (“The Final Problem”). He also wrote R. Holmes & Co., another comic novel about the exploits of Raffles Holmes, the son of Sherlock Holmes and the grandson of A.J. Raffles (the gentleman-thief created by E.W. Hornung), in Gilded Age New York. I like R. Holmes & Co. a lot; it’s an amusing novel with a protagonist who wants to be hero like his father and has to fight the temptation to be a villain like his grandfather. 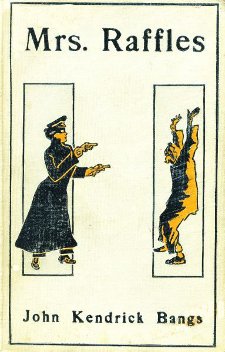 Today, I read another of Bangs’ works, a short novel titled Mrs. Raffles. Bunny, the chronicler in Hornung’s Raffles stories, has moved to the United States to elude the British legal system (since he and Raffles, of course, were criminals of the worst sort), and, hard up for cash, he receives a summons from Rhode Island from a woman who claims to be A.J. Raffles’ wife. (Raffles had, by this time, died during the Boer War in “The Knees of the Gods.” Though Hornung wrote more Raffles stories after that point, they were tales set earlier in their career and Raffles, unlike Holmes, remained dead.) Her name is Henriette, Bunny had nursed a crush on her when he and Raffles were thick as thieves, and Henriette needs Bunny’s assistance to scam and steal from the rich and the clueless in Newport, Rhode Island. She is passing herself off as part of polite society (calling herself “Mrs. Van Raffles,” the “Van” clearly an affectation), and she needs Bunny to pass himself off as her English butler. She’s the brains of the operation, he’s the idiot muscle and errand boy, and they pull off a number of schemes, ranging from fencing stolen art and land swindles to charity scams and stealing employees from social rivals.

I reread a number of Hornung’s Raffles tales over the summer; I went to Project Gutenberg, downloaded the three collections and one novel, and made myself an eBook omnibus with Calibre for my Kindle. I won’t say the stories were exactly fresh in my mind, but I’m pretty certain that there was no “Henriette” in Hornung’s tales. (It’s possible, I suppose, that one could map her onto the unnamed letter writer in “The Last Word,” though none of the details match up.) As for Bunny’s “voice,” Bangs’ Bunny doesn’t “feel” wrong. On the other hand, Hornung’s Bunny wasn’t the sharpest tool in the shed, but Bangs’ Bunny is downright stupid; a particularly good example of this comes in a story about, I kid you not, a violin-playing monkey, where it’s blindingly obvious to the reader who pulled a scam on Mrs. Van Raffles’ rival, yet Bunny remains utterly oblivious.

Oddly, you can fit this into the Raffles chronology. Bunny writes the stories in The Amateur Cracksman, The Black Mask, and A Thief in the Night. By the time he’s writing the latter book, he has moved to the United States (eluding the long arm of British justice and all that), whereupon he falls in with Raffles’ widow Henriette and her schemes. Perhaps, while he and Henriette are working together in Newport, he’s penning “The Last Word,” which is why its details don’t match up with Mrs. Raffles. Then Henriette runs off, leaving Bunny high and dry, whereupon he writes Mrs. Raffles from the depths of his broken heart. But he realizes that he doesn’t want to leave the Raffles saga on that note, so he writes Mr Justice Raffles about Raffles in his gentleman thief days to let that stand as the final word on his thieving friend.

I’m still pondering if it fits with Bangs’ own R. Holmes & Co. I lean toward saying that it doesn’t, because Bangs portrays Raffles as old enough in the early 1880s to have a twentysomething daughter. (To make that work, I mentally edit the book so that Marjorie, the daughter, is actually Raffles’ hitherto unknown sister and he’s pretending to be her father in the course of the scam he’s pulling that Sherlock Holmes foils. Which would make Raffles Holmes the nephew, rather than grandson, of A.J. Raffles.) And I don’t think Raffles went off to his death on the frontlines in the Boer War aged into his sixties. That said, there’s nothing in Mrs. Raffles that indicates her age; she seems to be young in the book, she doesn’t have to be Raffles’ contemporary in age, and she could be much younger than he was.

It’s difficult for me to recommend Mrs. Raffles as anything more than a curiosity. I know the book is supposed to be funny, but the humor here hasn’t survived the passage of time. I suspect that Bangs is mocking the Gilded Age’s idle rich and their obliviousness to anything outside their social circles, but the problem is that the targets of Henrietta’s schemes aren’t drawn especially well so they don’t come across as anything more than names. To the reader in 1905, the thinnly veiled names (like “Rockerbilt”) would have more resonance and perhaps didn’t need to be fleshed out characters; to the reader on the cusp of 2015, the names are little more than historical. Some works of fiction don’t age well. This one didn’t.

Mrs. Raffles: Being the Adventures of an Amateur Crackswoman is available for free from Project Gutenberg.