In Memphis, Tennessee a mega-church unveiled a new statue at its entrance: 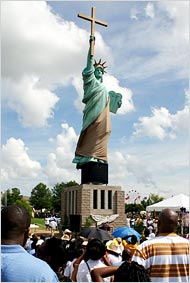 From the New York Times article:

As the congregation of the World Overcomers Outreach Ministries Church looked on and its pastor, Apostle Alton R. Williams, presided, a brown shroud much like a burqa was pulled away to reveal a giant statue of the Lady, but with the Ten Commandments under one arm and “Jehovah” inscribed on her crown.

And in place of a torch, she held aloft a large gold cross, as if to ward off the pawnshops, the car dealerships and the discount furniture outlets at the busy corner of Kirby Parkway and Winchester that is her home. A single tear graced her cheek.

It was not clear if she was crying because of her new home, her new identity as a symbol of religion or, as the pastor said, America’s increasing godlessness. But although big cheers went up from the few hundred onlookers at the unveiling, and some people even wore foam Lady Liberty crowns bearing Christian slogans, she was not universally welcomed.

Indeed, the minister Williams is reported in the article as explaining “that the teardrop on his Lady is God’s response to what he calls the nation’s ills, including legalized abortion, a lack of prayer in schools and the country’s ‘promotion of expressions of New Age, Wicca, secularism and humanism.’ In another book, he said Hurricane Katrina was retribution for New Orleans’s embrace of sin.” Sadly, this statue embraces its own intolerance.