At times, I feel unfinished.

I have days where I feel unimportant.  There are times that I feel that I have done nothing of note in my life.  Sometimes I feel alone in my life, that I have no friends and that no one cares about me.

There’s nothing remarkable about these feelings, I think we’re all subject to them from time to time.

And no, I’m not saying that I’m subject to them right now.  But when I do have a feeling such as these, I tend to feel it very keenly.

I’m an INFP, after all.  I feel everything keenly.

What brings this to mind?

I stopped by Barnes & Noble a few days ago after having my head shorn, hoping to find the new issue of MOJO.  Alas, they still had the last issue I’d picked up, the one with the New Order cover story.  Lest the trip turn into a complete waste, I browsed the store and found, on the bargain table, a book that had me with just the title — The World According to Mr. Rogers. 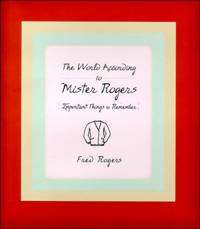 I picked up The World According to Mr. Rogers on Saturday, and I’ve kept it near my bed for some before-sleep light reading the past few nights. The book is arranged into four sections, collecting things Mr. Rogers said on topics like being oneself, learning to love, being a neighbor, and self-improvement. Each page has a different thought, some taken from his show, some taken from his songs, some taken from his speeches. It’s the kind of book that one doesn’t sit down and read straight through; rather, it’s best approached by opening the book to a page at random and then soaking in the wisdom of that page.

“Who you are inside is what helps you make and do everything in life.”

That’s typical of Mr. Rogers’ wisdom. I read that the other night. And I pondered on that.

Here’s a little secret. I don’t always think of myself as a good person. I have a difficult time understanding how people view me. I dwell on negative things, I feel the rejections more forcefully than the acceptances. I think less of myself than I deserve.

Recently, I won, quite inexplicably, a tarot spread reading. One thing that stood out from that reading was what it said about how others see me — “The Star: offering aid and succor to those who need it.” I know this is true, I just don’t always feel that it’s true.

When I feel down, when I think less of myself, when I feel alone or lacking in value, when I feel unfinished, I know that The World According to Mr. Rogers is a book I’ll turn to and I’ll ask myself, “What would Mr. Rogers do?”

And really, that’s not such a terrible idea anyway, is it? 🙂