Polydactylism in cats is a genetic mutation, and a dominant gene. The mutation appears to have originated in Kent in the 1600s, and polydactyl cats were brought to North America by the Puritans in the 1630s. They were thought to be a sign of good luck to ship captains. Polydactylism is a defining characteristic of the Maine Coon cat, though about forty percent of Maine Coons have the normal compliment of toes. 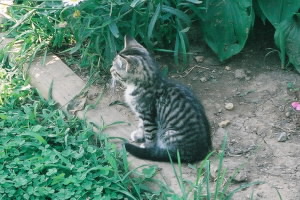 Polydactyls are most common in the Boston and Philadelphia areas, not very common in New York, and unknown in Europe.

I had a cat with seven toes on her front paws, six on her back. The extra toes she could work like thumbs, and she often amused herself by playing with marbles–she could pick them up just by wrapping her thumbs around them, and then hide them under kitchen mats.

She took ill and died quite suddenly one day. Some disease, something passed through. It killed off most of the feral barn cats in the area, too.

She had died in my arms. Burying her was hard. I bought a bag of marbles at the hobby shop, and put them and some of her cat toys in the shoebox with her. It was hard.

One thought on “On Polydactyl Cats”