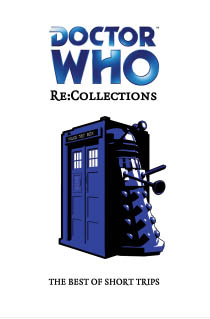 Received in the mail today — Re:Collections: The Best of Short Trips.

As I wrote a few weeks ago, Re:Collections is the final volume in Big Finish’s series of Doctor Who short story anthologies, with a single story from each volume in the series reprinted in this volume. Among the stories in the book is my own sixth Doctor story, “The Spindle of Necessity.”

The cover, as you can see, is rather striking.

If you’re curious about Doctor Who short fiction and my own contribution, WhoNA has Re:Collections right now for $19.95, which is a good ten dollars less than ordering the book direct from Big Finish.

3 thoughts on “On Re:Collections: The Best of Short Trips”