For the first time in a decade, I watched Paul McGann’s single televised outing as the Doctor. 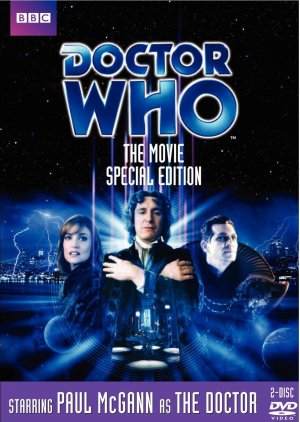 The Doctor Who television movie, aired on Fox in 1996, has been unavailable in North America on video or DVD since, well, forever, due largely to the rights issues between the BBC, Vivendi-Universal, and Fox itself, over how the production shook out. So while much of the Doctor Who viewing world has been able to buy the film on VHS and DVD since before the movie even aired, on this side of the pond we’ve been restricted to aging off-air VHS recordings until, earlier this year, the dam broke and the 2-disc special edition of the movie was released on DVD.

Naturally, I had to buy it. Naturally, I didn’t buy it with any sense of alacrity; I waited for it to turn up at a liquidated price. 😉

The last time I watched the film, it was on Christmas Eve, 2001. The Sci-Fi Channel showed it at something like 11 o’clock, and that was the thing that kept me going that Christmas. While other things happened that Christmas, like getting nailed in the head by a falling PlayStation 2, or maybe that was the Christmas before, at EB Games, here’s my thoughts at the time on “The Enemy Within”:

I never thought it was a bad film, though Daphne Ashbrook never really clicked for me. (Honestly, I thought she was at her best when the Master had mental possession of her and her eyes were black.) Eric Roberts was okay as the Master. The thing had a simply fantastic look. Yes, it looked completely different than anything Who had done before, but theres nothing wrong with that. No, the story doesnt entirely hang together (and the Seventh Doctor suffers a stupid death), but thats nothing new in Doctor Who. Theres one aspect of the eighth Doctors personality that Ive never seen picked up elsewhere, that habit of dropping hints to random people on their futures.

Ten years on, what do I think?

This time around, Ashbrook did click for me, and not just because she’s really attractive in this, which she is. When we meet Dr. Grace Holloway, she’s a dedicated medical professional, albeit one with a crappy relationship with a drip of a boyfriend. She has a wacky adventure, she goes from total “What the fuck is this?” disbelief to acceptance of the Doctor’s weirdness to a working relationship with the Doctor to rejecting the Doctor’s offer to travel with him and have more wacky adventures.

In short, Grace has Donna Noble’s character arc from “The Runaway Bride.” Or, rather, Donna’s character arc totally apes Grace’s. Except that Donna never sees the Doctor in “Runaway Bride” as the greatest guy in all the universe, unlike Grace who locks lips with the Doctor on three occasions and really enjoys it. And like Donna, Grace is older than the companion norm. (Ashbrook was 32 when “Enemy Within” was made; her character is probably a few years older than that.) I think the experience of Donna — and loving Donna as a character — made me more receptive to how non-traditional Grace Holloway was, even if Grace did get in a few “What now, Doctor?” moments. 🙂

Eric Roberts as the Master. Y’know, fans have dumped on Roberts for fifteen years. Some say he’s not serious enough. Some say he’s too campy. Compared to John Simm’s performance in “The End of Time,” Roberts plays the Master as seriously as Lawrence fucking Olivier. Roberts’ most absurd moment comes when he calls Chang Lee the son he always wanted; it’s an absurd statement on its face, and Roberts seems to realize how batshit it is, which might be why he plays it off. Yes, Roberts’ performance is a little stiff, but that’s also because Roberts played the Master like he was a zombie of sorts under the control of another intelligence, as though he was working out how to make the body work. Overall, Roberts really wasn’t terrible at all as the Master. He’s no Anthony Ainley, he’s certainly no Roger Delgado, but he’s not terrible by any objective standard. It’s only in comparison to his predecessors that he looks bad.

The look of the film. Okay, the TARDIS sets looked fantastic. You could see where the production’s money went. The New Year’s Eve party at the Time Institute or whatever it was. That looked good, too. Otherwise, it looks like mid-90s sci-fi television. There are some obvious changes in film texture, where stock footage doesn’t match. In some ways, this feels visually like a Star Trek: The Next Generation episode, and I wonder if this was, like ST:TNG, shot on film and edited on video, which would explain why some of the visuals don’t hold up. Plus, the DVD transfer is not good, such as artifacting problems. Watching “Enemy Within” with a 2011 eye, the visuals don’t hold up. Late-80s Doctor Who actually looks better on DVD.

As for the story, it’s poor. I don’t know that I need to add anything more to it than that.

The Master’s plan is clear — he wants to capture the Doctor and steal his remaining bodies so he can live forever. What is not clear is how the Doctor stops the Master. (One interesting thing to watch for — the Doctor shows Grace what the result of the Master’s plan will be, and it’s what happens when the TARDIS explodes in “The Pandorica Opens.”) I don’t understand how the TARDIS gets a jumpstart. I don’t understand how and why the Doctor plans on popping back in time and what that will actually accomplish. I don’t understand what the hell “Temporal Orbit” means. (Another interesting thing to watch for — the regenerative lifeforce that resurrects Grace and Chang Lee looks exactly like regeneration energy in the new Doctor Who series.) Considering how many fanwank moments this thing gets, why didn’t it just say “Temporal Grace” was the reason Grace and Chang Lee come back to life?

The seventh Doctor’s death is effective, for the reasons commentators other than myself have explained, but I’ll give it a try anyway. The seventh Doctor was the master manipulator. He was the man with a plan. He was playing thirteen-dimensional chess. He was Keyser Soze. And he steps out of the TARDIS and gets shot up by the crossfire of a San Francisco Chinatown gang war. It doesn’t have anything to do with the story. It’s never referred to again. It’s just that this Doctor, the one who’s on top of everything, dies a fucking stupid death. Oh, the irony!

So now that I’ve addressed my thoughts from a decade ago, what did I think overall?

It could have been so much worse.

It’s difficult to judge on its own merits, because it was meant to restart the franchise which had been off the air since 1989. As a pilot, it’s pretty terrible. It doesn’t give you a good idea of what kind of series this would lead to (apparently, producer Philip Segal intended a series that was like the Pertwee era crossed with The X-Files — mostly contemporary Earthbound, with occasional jaunts off-planet), and it throws a lot of pointless information at the audience. (Imagine that “Encounter at Farpoint” spent its time explaining the 24th-century warp drive scale, the mating habits of Vulcans, and the line of succession to the Romulan throne, none of which had anything to do with the story. That‘s the level of pointless information Matthew Jacobs’ script tosses out.) And its story is an utter mess. It’s a story pitched at the fan audience, who already knows this stuff. It’s not a story pitched at the non-fan.

And yet! Look at when this was first broadcast — May 1996. Star Trek: Deep Space Nine was finishing up its fourth season. Star Trek: Voyager was finishing up its second. Babylon 5 was at some point in its run. Doctor Who‘s “Enemy Within” might not have been on par with the writing of Babylon 5 or Star Trek: Deep Space Nine at that point in their runs, but it’s about equal in style to Star Trek: Voyager. Its similar in the sense that, like Voyager, “Enemy Within” is a visceral piece of entertainment. The plotting isn’t compelling, the dialogue has moments of sparkle and wit, and the less thought the viewer puts into the episode the better, because it will all come tumbling down with the briefest of thoughts.

I don’t really think, “Oh, what might have been!” with this. That’s not to say that there wouldn’t have been an interesting series to come out of this — McGann and Ashbrook mesh well on screen, and they could have had a good Mulder/Scully dynamic for five to seven years, though maybe not as sexless — but we’d have lost far more than we gained. For one thing, we’d have lost much of the literature of the eighth Doctor with an ongoing television series because the novels and comics would have had to service that, not break their own ground. I love that I live in a world with The Adventuress of Henrietta Street, “The Land of Happy Endings,” and Shada; a world with a Paul McGann series would almost certainly have none of those. But it’s also a fair certainty that we wouldn’t have had a Doctor Who redone by Russell T. Davies, and we wouldn’t have had Christopher Eccleston and David Tennant and Matt Smith helming the TARDIS in that world.

“Enemy Within” was a nice attempt. It tried. It failed.

And yet, Doctor Who soldiered on.

I don’t know when I’ll revisit “Enemy Within.” I probably won’t for a few years because, honestly, I’m feeling the itch to revist “Pyramids of Mars.” :h2g2:

2 thoughts on “On Revisiting Paul McGann’s Doctor Who Movie”