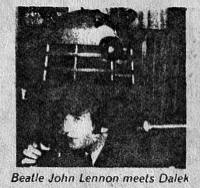 I was browsing the forums at Outpost Gallifrey the other day and came across a thread that asked, “Should Doctor Who do a Beatles episode?” That caught my attention. 🙂

A clip of the Beatles appears in “The Chase” — and had the scheduling worked out the Beatles might’ve appeared in the story. Ian’s familiar with the Beatles’ music. Vicki, coming as she does from the future, has visited the Beatles museum in Liverpool. Beatles songs were heard in “Evil of the Daleks” and “Remembrance of the Daleks.” There’s a picture of John Lennon posing with a Dalek prop. So there are certainly some links between the Beatles and Who.

But a Doctor Who episode that centers around the Beatles. Hmm. We could have something like the audio “Invaders from Mars” with the Doctor working in the background while the Beatles perform at, say, Shea Stadium or their final concert at Candlestick Park. Or we could have a story, like the movie Backbeat, in which the Doctor was there in their early days.

Just thinking about the idea I came up with what I thought would be a fun idea. The Doctor has to save the Beatles — maybe all of them, maybe just one or two — from an intergalactic traveling rock-n-roll show.

No, I have no idea what to actually do with it, but there’s potential. RTD, if you’re casting about ideas for the fourth season celebrity historical, drop me a line! 😆