I put the word “album” in quotes because it’s not an album, not really. It’s just an iTunes compilation, along the lines of the “Essentials” collections many bands have on the service, and it’s called Tomorrow Never Knows. 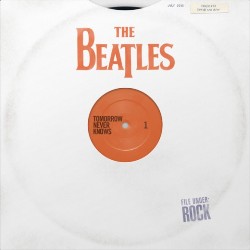 It’s fourteen tracks. It’s supposed to highlight the Beatles as rockers. And with tracks like “Revolution,” “Paperback Writer,” “Hey Bulldog,” and “Helter Skelter,” it does what I suppose it’s meant to do. I’m impressed, though, that it goes with two tracks from Yellow Submarine — “Hey Bulldog” and “It’s All Too Much.”

Universally hailed for its unparalleled, transcendent quality, The Beatles’ recorded catalogue includes many of rock music’s most powerful and important songs, including “Revolution,” “Helter Skelter,” “I’m Down,” “It’s All Too Much,” “I’ve Got A Feeling,” and “The End,” while deep cut tracks like “Savoy Truffle,” “You Can’t Do That,” and “Tomorrow Never Knows” continue to surprise, move and inspire the next generation. The Beatles’ groundbreaking songs and albums continue to resonate for fans and musicians like Foo Fighters’ Dave Grohl, Arcade Fire’s Win Butler, and Band of Horses’ Ben Bridwell, serving not only as rock music’s bedrock, but also as a leading influence on popular music at large. (Source)

I didn’t buy it. I simply put the tracklist together in Winamp from my mp3s. And I suspect that for most Beatles fans, they could do the same. I guess there are people who wants Beatles music who don’t own Beatles music, and I suppose that’s who this “album” would be aimed at. But if you want to put together a “rocking” Beatles playlist, the Rock ‘n’ Roll Music compliation album from the mid-70s works just as well — and has twice as many tracks.

I have listened to it, or at least my recreation of it. Tomorrow Never Knows isn’t bad. It’s the Beatles, so at the very least it’s more than okay. It just seems random and pointless to me.