It’s been a week.

This month, all of that was amped up to eleven. There were also spreadsheets to be entered into the CMS, press releases to wrangle, meetings, and eleventh-hour cock-ups.

Then, even though the Red Sea parted and my week became clear yesterday at roughly 2:30, the work I did after that in a database was lost entirely. None of it saved.

On top of that, I somehow rammed my head into the door bulkhead of my Beetle as I got in to go to work on Wednesday, so I have a bruised top-of-my-head that really really hurts. It’s a head pain, not a headache.

And my cubicle neighbor has, I suspect, infected me with the Plague.

Suffice it to say, it’s been a week.

When last we spoke on Sunday, I was toying with stylesheets to improve the readability of TrekBBS. I currently have this nice minty-green thing going… 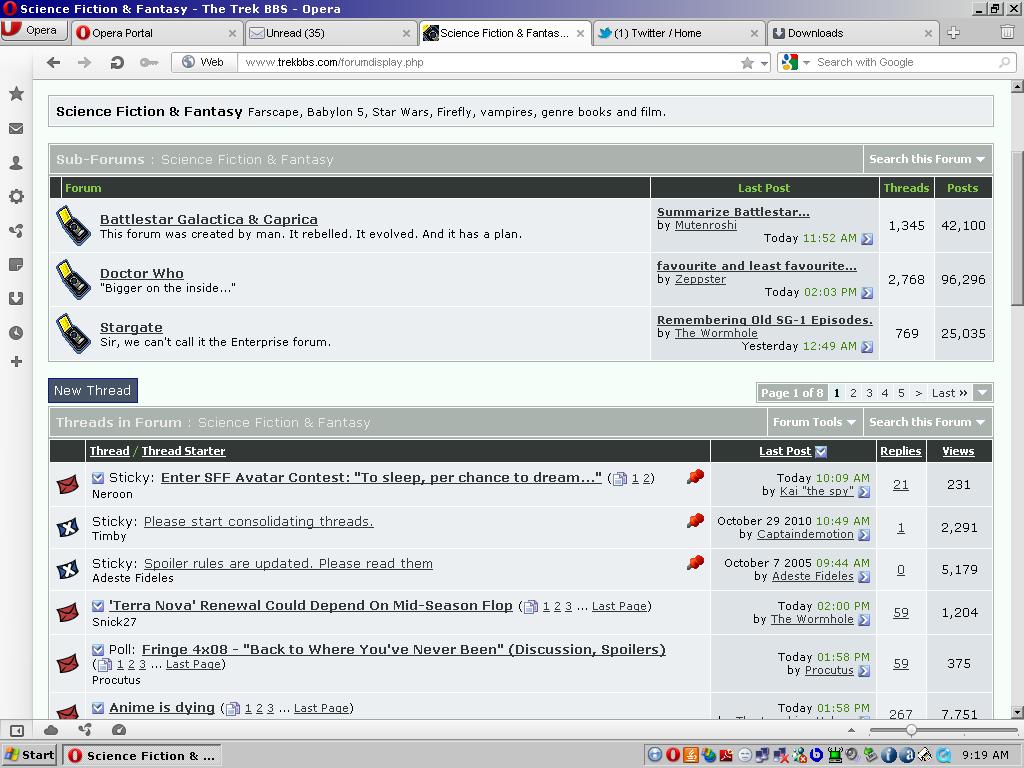 It’s all done with a local stylesheet. As you can see I’ve removed the sidebar — it’s too wide for a 1024 monitor — though I’ve been experimenting with resizing it down with CSS to half its current width. Some things can’t be changed, like the black header at the top or some of the buttons (which are hard-coded graphics), but otherwise, it gives the site an easy-to-read look.

Of course, the CSS coding to achieve all that reignited my itch to code. I’ve been working on a new website design, and while I think it’s done, recently I’ve felt the itch to rework it for HTML5 and CSS3. (WordPress’ current default theme, Twenty-Eleven, is an HTML5/CSS3 design, since that’s the direction web design is heading.) I haven’t made the leap to scrap what I’ve done and start coding again, but I am starting to see in my head how certain things (particularly in the area of responsive design) would fit together.

However, even if I don’t do anything with that code, I did scratch a little bit of the tinkering itch by updating several WordPress plugins this morning, including one to black out the blog on the 18th in support of the SOPA blackout. I’m also experimenting with the updated LiveJournal crossposter; the last version conked out for me during LJ’s recent spate of DDoS attacks.

And since it’s going to be a cold weekend, I should get caught up on my comic book reading.