I have finished War and Peace. The BBC audio drama, that is, not the novel. Which I have read; I read it in high school a long time ago. 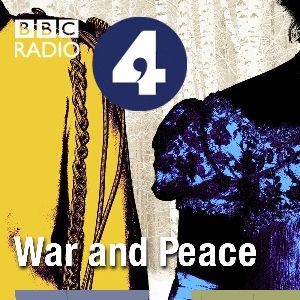 A decade after Napoleon’s invasion of Russia, the Rostov family and their spouses gather for a weekend, and the young children want to know all about Napoleon and the war and what the adults did during the war. As a narrative device, this worked for me. First, it was a way of getting the exposition across naturally. And second, it allowed the Second Epilogue (Tolstoy’s meditation on the nature of history) to be voiced by the characters (specifically, Pierre). These scenes aren’t always great, but they do serve a purpose.

That purpose is to tell the story of the seven years preceding the invasion of Russia and its aftermath as tediously as possible. There are more romantic entanglements and misunderstandings here than there are in the entire Jane Austen corpus. Characters have personal or financial problems, and they never learn from their problems. If it weren’t for titles and names of characters and places, the production never conveys a sense that the story takes place in Russia. It’s an indistinct production, lacking in character.

The performances are mixed. I really came to dislike Patterson Joseph’s Pierre; his stammering, mannered performance became grating to listen to. I also found Natasha hard to take; I know the character is young and flighty, but that doesn’t make the performance easy to listen to. Some characters, like Countess Rostova, were never sympathetic. Princess Marya was probably the most consistent of the major roles.

I never felt involved by this. I found myself not caring about major characters, and I uncharitably thought Pierre and Natasha marrying was less a case of love than a case of two pathetic people having exhausted every better option.

I know that Pierre is widely regarded as one of literature’s great characters, and I dimly recall liking the character a great deal a long time ago, but when I’m calling Joseph’s Pierre “pathetic” at the end, after everything he went through, that may tell you just how misguided this adaptation of War and Peace was.

I feel bad picking on this — a lot of effort and time was put into making this — but the end result was tedious, dull, and definitely not must-listen drama.

You’d be better off reading the novel.