A few weeks ago I saw John Carter, director Andrew Stanton’s adaptation of Edgar Rice Burroughs’ A Princess of Mars, the first of his eleven books set on Barsoom (better known to us as Mars), for Disney. John Carter has become legendary as one of the biggest box office failures of all time, which is unfortunate because the film is really quite good.

Before I saw John Carter I reread A Princess of Mars to refamiliarize myself with a place I’d not visited in a quarter century. I had also intended to read John Carter: World of Mars, a four-issue comic book mini-series that Marvel Comics published last year that served as a prequel to the film, but an inability to find where I’d filed the issues in my longboxes and a shipping error on the trade paperback edition when I gave up on trying to find the singles, resulted in a delayed read of JC:WoM. 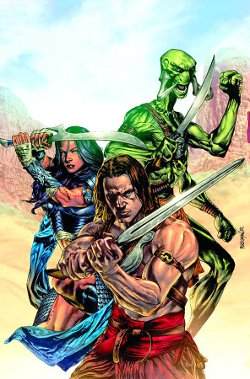 And, to be honest, that’s not a bad thing. John Carter: World of Mars is enjoyable and I’ll gladly recommend it to anyone who liked John Carter, but I think it works better after you’ve seen the film, even though it’s about events before the film. Having seen the movie before reading this, I have the benefit of knowing where the stories in this graphic novel end up, and thus things in the graphic novel have a greater resonnance than they would have had I read the issues in February as I’d planned. If that makes sense. 🙂

Basically, John Carter: World of Mars answers two questions about the world of John Carter. First, how did Tars Tarkas become the Jeddak of the Tharks. Second, what the root of the animosity between Dejah Thoris of Helium and Sab Than of Zodanga. John Carter, though he only appears on four pages in the entire book (the first three pages of issue #1 and the final page of issue #4), narrates the story — these are stories that Dejah Thoris and Tars Tarkas individually told him about events that occurred to them about twenty years prior to John Carter, and the narrative style suggests that this is part of the manuscript that Carter’s nephew Edgar Rice Burroughs reads about Carter’s Martian adventures. And though Dejah Thoris and Tars Tarkas never realize it, their stories intersect for one brief moment and then diverge once more.

Tars Tarkas’ story is basically a road trip story. Two buddies, one a coward full of bluster, the other a quiet, unassuming sort, set off on a trip to prove themselves, and the quiet one’s nagging girlfriend tags along. The blustering coward is Tal Hajas, the quiet one is Tars Tarkas, and Tars Tarkas’ girlfriend is a new character, Loas. Their quest? To find Gothan, the ancient leader of the Warhoon and defeat him in battle to prove their worth as warriors. The quest plays out as a kind of Indiana Jones-like story, albeit one with Martian White Apes and heroes with four arms.

Dejah Thoris’ story is a Burroughs-esque tale of love and kidnapping. You think I kid, but that’s a standard trope of Burroughs’ work — villain is in love with woman, villain kidnaps woman, hero tracks down villain, hero battles death traps, hero defeats villain and frees woman, hero wins woman. This is the way Dejah Thoris’ story plays out… except there’s no Burroughs-esque hero (in other words, John Carter) to save her, so Dejah Thoris has to brave the death traps (in this case, a sandstorm and a Warhoon arena filled with calots) on her own and save herself from her kidnapper, Sab Than.

Peter David gives John Carter: World of Mars a Burroughs-esque flavor throughout. One thing that marks Burroughs’ writing is the way that the story changes every few pages. Some new plot element will appear, a new character will surface, and everything you thought was going on gets shoved aside as the story goes somewhere else instead. JC:WoM has the same kind of breathlessly episodic feel.

Is the story accurate to Burroughs, though? No, it’s not. The Red Martians wear too much in the way of clothing, and the identity of Tars Tarkas’ love differs from the backstory given in A Princess of Mars. However, the clothing is the way John Carter portrays the world (a Burroughs-accurate film would have netted an NC-17 rating), and one could rationalize the clothing by saying that this story (and John Carter, too, for that matter) takes place during Mars’ six month-long winter. And though John Carter never identifies the mother of Sola it would have been nice to have an acknowledgement of the story in A Princess of Mars (where Sola’s mother is a Thark named Gozava), one could argue that 1) Loas is a nickname for Gozava, 2) Tars Tarkas lied to John Carter about the name of his true love in JC:WoM, or 3) Sola was misinformed about her mother’s identity in A Princess of Mars. The important thing is that Loas and Gozava are clearly intended to be the same person, just with differing names.

But I should note that John Carter: The World of Mars doesn’t need fidelity to Burroughs. It only needs to be true to the world seen in John Carter, and that it does very well. Luke Ross’ artwork evokes the world of Andrew Stanton’s film, and though the likenesses of Dejah Thoris and Sab Than aren’t always accurate to the actors from the film, they’re certainly recognizable as the characters that they’re supposed to be.

The graphic novel collection reprints the four issues, along with a sketchbook and Peter David’s script for the first issue. If you’re interested about the process that goes into creating a comic book, this is quite interesting material.

I liked John Carter: World of Mars, and if you like Burroughs’ work (and can accept that this doesn’t match up exactly with Burroughs) or you liked the movie John Carter, then I have a hunch you’ll enjoy this as well. It’s a neat read, it’s nice to look at, and, like John Carter, it’s fun. And while Marvel is publishing adaptations of Burroughs’ Barsoom novels, I hope they won’t ignore the world of John Carter because I’d like to see more stories in Andrew Stanton’s version of Barsoom./i