On Things I’ve Been Reading: Peanuts #0

Earlier in the year, BOOM! Studios published Happiness is a Warm Blanket, Charlie Brown, a hardcover graphic novel adaptation of the most recent Peanuts animated special, which was based on a number of Peanuts comic strips published over the years. 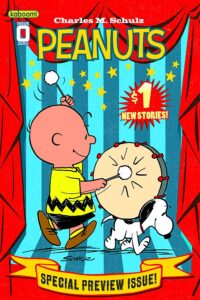 Last week, kaboom! released Peanuts #0, a 24-page comic book that included a couple of classic Peanuts comic strips, the first four pages of the Happniness is a Warm Blanket, Charlie Brown graphic novel (which just came out in paperback), and two brand-new Peanuts stories, all at the budget price of just one dollar.

The first story, “Carnival of the Animals,” is, according to the index page, an “adaptation” by Rob Zorman. I’m not sure if it’s an adaptation of a series of Schulz strips or an adaptation of the non-Schulz Peanuts comic books of the early 1960s. Either way, it’s a slice of early ’60s Peanuts in look and feel, with Charlie Brown musing to Violet about how Snoopy isn’t content with being a beagle; he has to be other animals, too. This leads to an argument between Charlie Brown and Violet, which leads to come cutting comments by the later, and finally the kind of sardonic emotional denoument typical of Schulz’s work. A comment I made in relation to Happiness is a Warm Blanet applies very well to this six page story: “Essentially, Happiness is a Warm Blanket, the graphic novel, reads like an alternate universe Peanuts where, instead of being a comic strip, Peanuts was a single-page gag comic book.” While each of the first four pages could be reformatted to a four-panel Peanuts strip in terms of narrative and pacing, the fifth page does something that Schulz simply couldn’t have done in a comic strip. Overall, it’s an entertaining piece of 60s-era Peanuts, and I could head Peter Robbins as the voice of the exasperated Charlie Brown.

The second story, Vicki Scott’s “Woodstock’s New Nest,” has Snoopy attempt to find Woodstock a new home when his nest has been destroyed. Scott’s Snoopy is wordless, owing more to the Snoopy of the animated Peanuts specials than to Schulz’s Snoopy who, even though he couldn’t talk, had wordy word balloons. Each page has Snoopy taking Woodstock to a new place in search of a new nest. First, Snoopy tries to put him in the nest of Woodstock’s bird friends, who want nothing to do with him. Then, Snoopy tries to fix Woodstock up with a swing. Finally, Snoopy finds Woodstock a new home, and tiring of the bird’s pickiness, Snoopy leaves him. With its silent storytelling, this story felt like a segment from The Charlie Brown and Snoopy Show of the mid-80s.

In addition to these and the first four pages of Happiness is a Warm Blanket, Charlie Brown, there are a couple of Peanuts Sunday strips from over the years.

Peanuts #0 is cute and amiable. The stories may not be Schulz originals, they may not break new Peanuts grounds, but they have the Schulz feel, and for me that’s good enough. And really, for a dollar, you can’t go wrong.