A bit more than a year ago, I was anxiously anticipating the Lord of the Rings video game, The White Council. An open-ending role-playing game, along the line of Morrowind, The White Council would have put gamers in the role of a character in the period a few decades prior to The Lord of the Rings, when Sauron was beginning to reclaim his powers and darkness was creeping back into the world.

Unfortunately, Electronic Arts suspended development of the game. The game’s website vanished. I snagged as much promo artwork from the game as I could while scouring the Internet — EA produced some truly beautiful desktop wallpapers, and for a while the White Council depiction of Sauron’s fortress of Dol Guldur was my desktop at work.

(Currently, my work desktop background is the virgin cover art from the SFBC hardcover edition of Naomi Novik’s Temeraire trilogy. Ships of the line and dragons, a winning combination.)

I bring up The White Council because yesterday I made a surprising discovery; a 16-month calendar based on the game was planned. 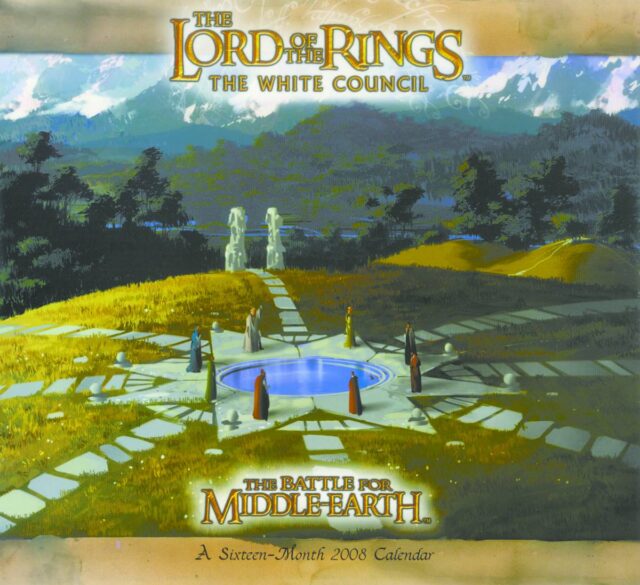 I can only imagine what might’ve been in the calendar. Would it have been artwork, like the desktop backgrounds? The Northern Argonath? The vast Dwarven city? The home of Radagast the Brown? Concept artwork?

Perhaps even some of the artwork of the former carried over into the latter.

It’s an interesting calendar, the Witch-King calendar. When I first saw it, at a calendar kiosk at the local shopping mall, I thought it odd that a calendar based on a Lord of the Rings video game would have been produced. Especially when there was new Tolkien artwork in The Children of Hurin calendar.

Given the number of the Witch-King calendars that I’ve seen in the dollar bins at bookstores in the weeks since the New Year, I don’t imagine that it sold especially well.

It’s not the best Lord of the Rings art calendar I’ve ever seen. But for what it is, the Rise of the Witch-King calendar will do.

I can’t help but think of what a White Council calendar would have looked like, though. In my mind, it was absolutely amazing.