Last night I was in Harrisburg for my sixth Senators game of the year. In the spring I bought a six-ticket mini-plan, and a ticket from April, when my Beetle was in the shop with a blown transmission, was swapped out for a ticket in August. Last night, to be exact.

The Senators were playing the Binghamton Mets. It was also Pink Night, when the Senators honored survivors and victims of breast cancer with an on-field ceremony and special jerseys that were printed with the names of 100 women who fought, and in some cases lost, their battles with breast cancer.

And, finally, the Racing Presidents were here! 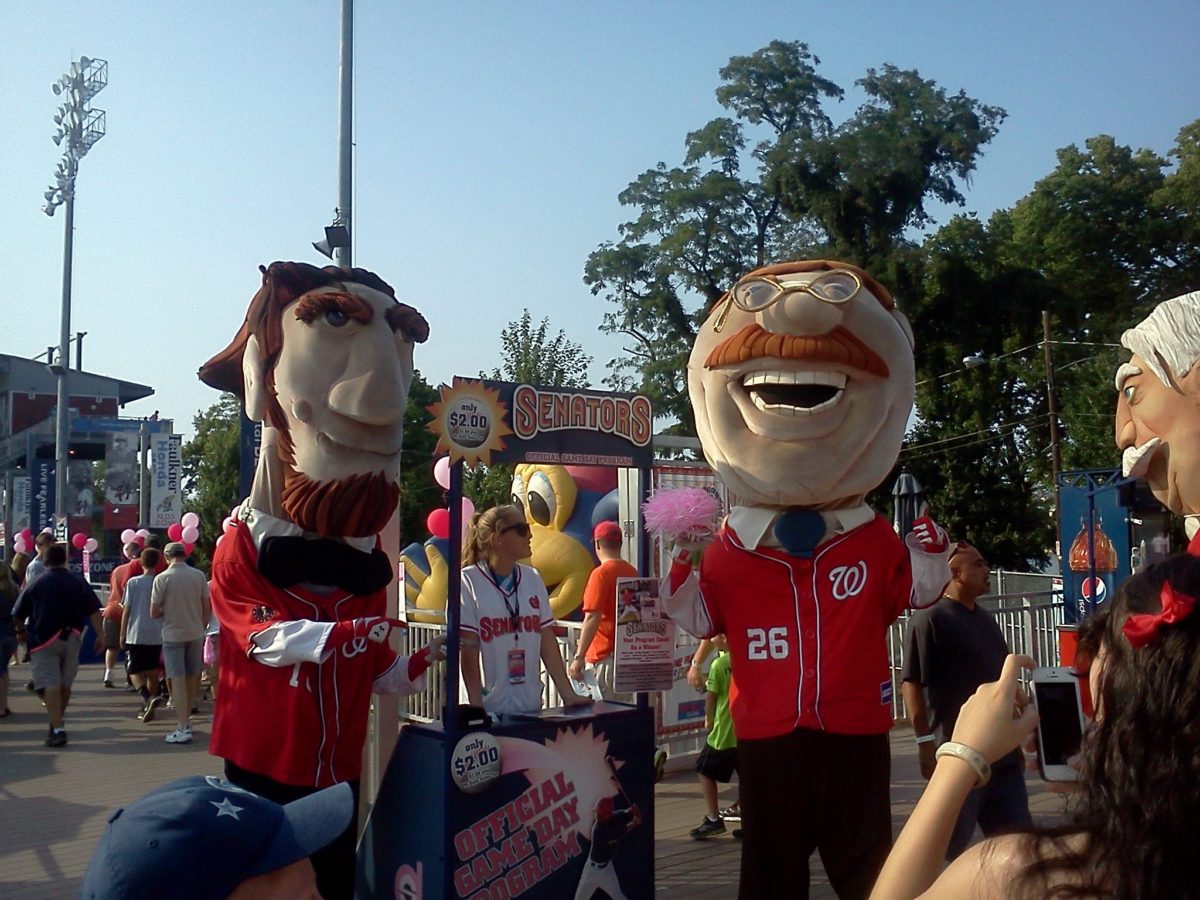 My plan ticket was for section 207, in the grandstand a few rows in front of the press box. My swapped out ticket was for the outfield box — section 403, the Ollie’s Bargain Outlet Cheap Seats. In my two seasons of Senators games, I’ve never had an outfield seat before, so this was a new experience. 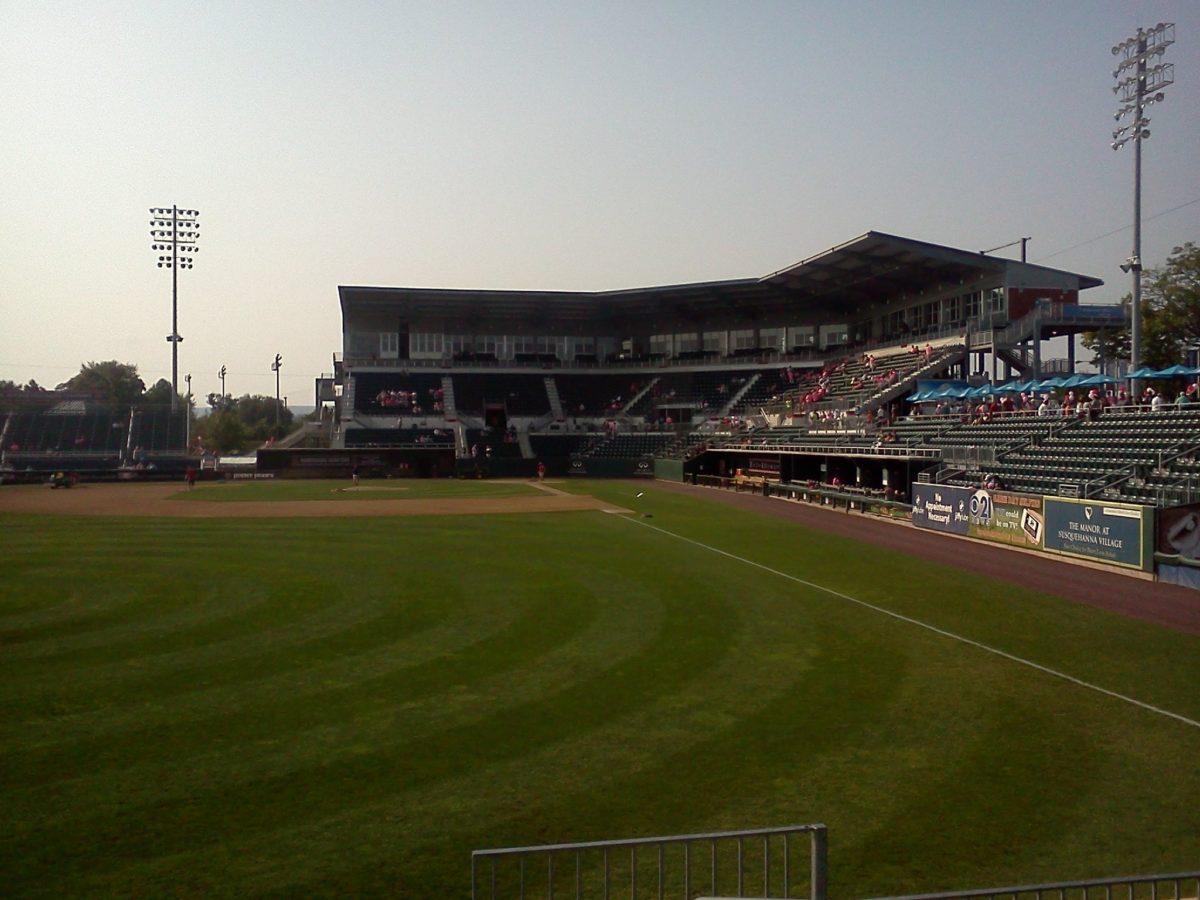 People were wearing pink. If you didn’t have pink, they were handing out pink pom poms at the gate. And if you wanted to wear pink, the team store was selling a pink Senators t-shirt for twenty dollars, with five dollars of that going to the American Cancer Society’s Making Strides Against Breast Cancer program.

I bought the t-shirt. It was for a good cause. I put it on in the men’s room. I will probably never wear it again, and that’s okay.

PA announcer Chris Andree made the player introductions — and the Harrisburg faithful were as indifferent to the announcement of the Senators’ players as they’ve always been. And then the parade of breast cancer survivors and families onto the field began. 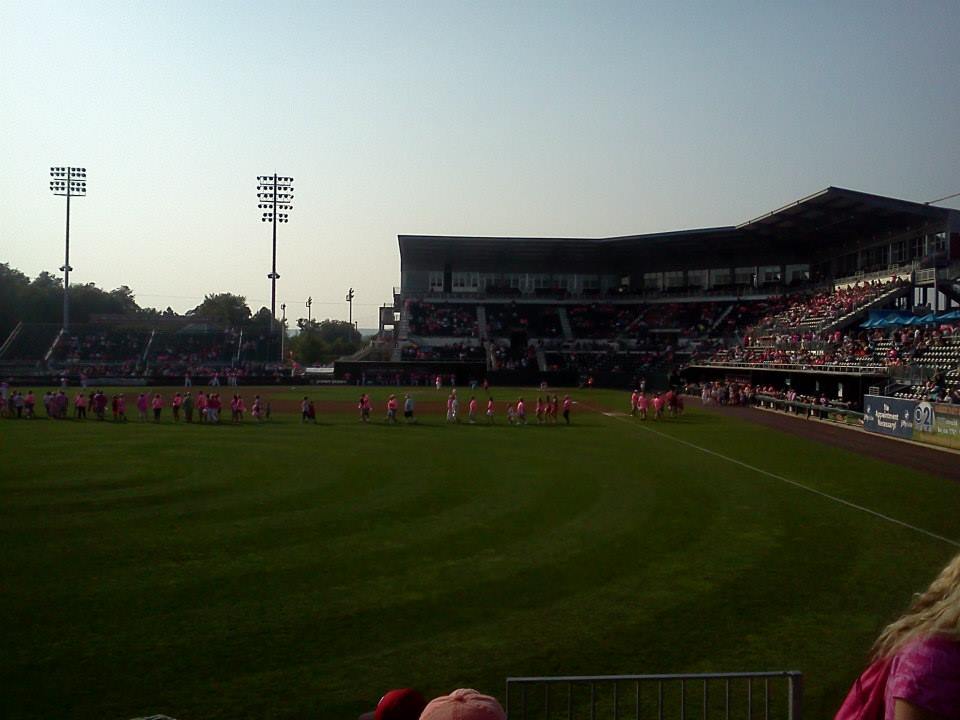 It took about five minutes for the families to make their way onto the field and out to center field. From section 403, it looked like a mass of humanity:

This is what it looked like from the grandstand, however:

As the families stood in center field, a list of the names on the special jerseys rolled on the screen. There was applause from families as the names of their loved ones came up. I’m not ashamed to admit that I teared up at this ceremony. It was a lovely thing.

And the two teams came out and stood along the first and third base lines to show their support for the breast cancer survivors and family and, of course, for the National Anthem.

The Senators, by the way, were wearing a variant cap, the blue Mayfly logo cap. City Island, where Metro Bank Park stands, is inundated with mayflies. They gather around the lights in the late innings and they dive bomb the stadium. In the bleachers, it’s not unusual for people to get mayflies in their food. Last year, I got a mayfly in my eye.

The parade exited the field, which took about five minutes to accomplish, and then the game began. Pitching for the Senators, John Simms. 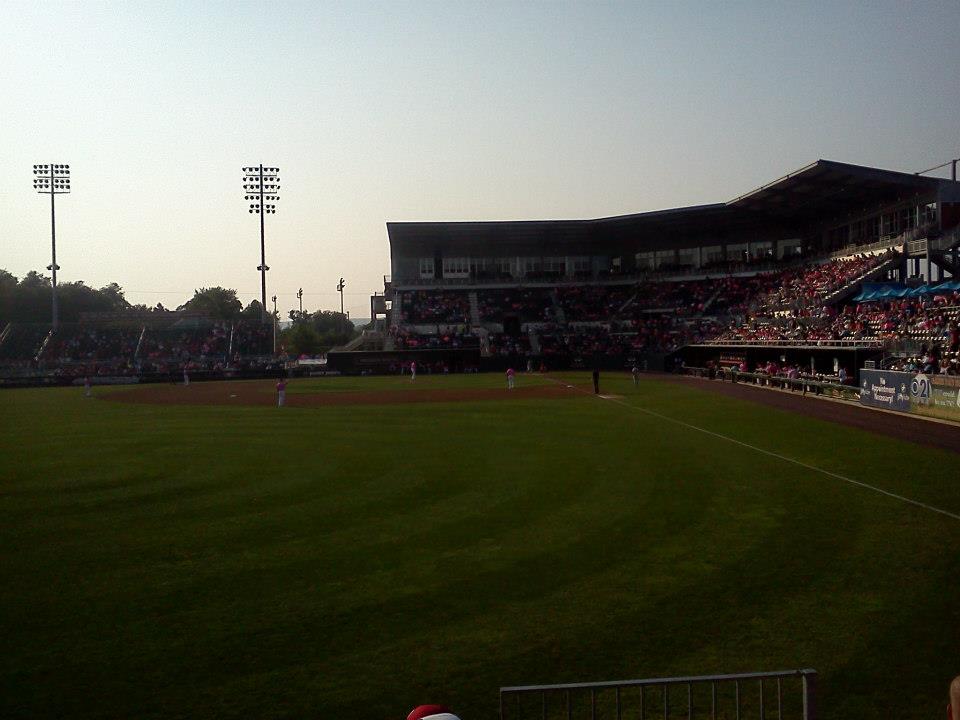 I feel confident that Simms has not allied himself with the Toclafane and is not planning to decimate the Earth.

On a night like last night, with a very clear sky, I discovered that there’s one major problem with the Ollie’s Bargain Outlet Cheap Seats — it can be very difficult to pick out the ball against a pale, clear sky. It has to do with the orientation of Metro Bank Park — home plate sits on a north-south axis, and the sun was over the first base line the entire game. A home run ball in the first inning, which smacked the ribbon board above the left field wall, I had no idea was on its way because I couldn’t see it.

But, you know, that’s okay.

And out of the center field door came the Presidents! Taft came out first. From the vantage I had I saw that the Presidents had two people helping each one out through the door (since the heads had to be tipped over to get them out the door), and once all five, followed by the monkeys, were out, the race began. 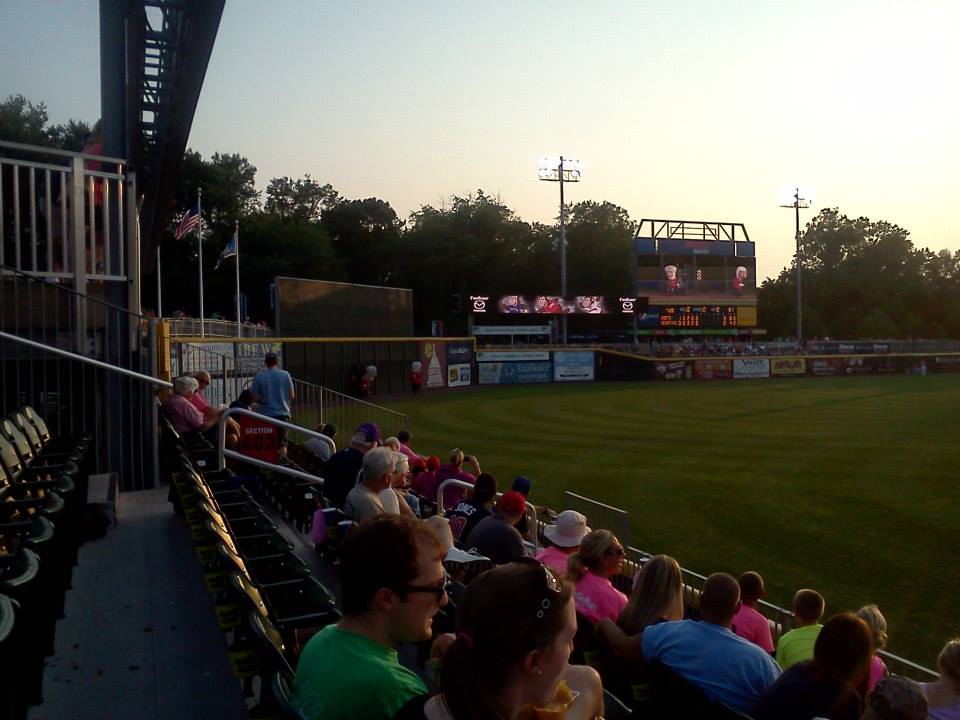 Teddy had an early lead, he was overtaken by Abe, and as Abe neared the finish line someone came out on the field, tripped up the presidents, and then the monkey in the blue jersey (which is not Steve — he wears white) won the race.

The Presidents milled about the stadium through the game, and they participated in the t-shirt toss in the second inning. They were not particularly good at that; they couldn’t work the sling that flings a t-shirt into the stand.

In the seventh inning, the PA announcer asked everyone to stand and remove their caps for “God Bless America.”

Sorry, #hbgsens, "God Bless America" isn't something I stand for. It's not the National Anthem. It's just a song.

And I didn’t stand or remove my Senators cap. I have reasons. Some are personal, some are political. My refusal to stand means no disrespect to the performer; the girl who sang the song last night did a fine job. I don’t do anything disruptive, I sit there in stony silence. I realize that every time I don’t stand for “God Bless America” I’m opening myself up for abuse. 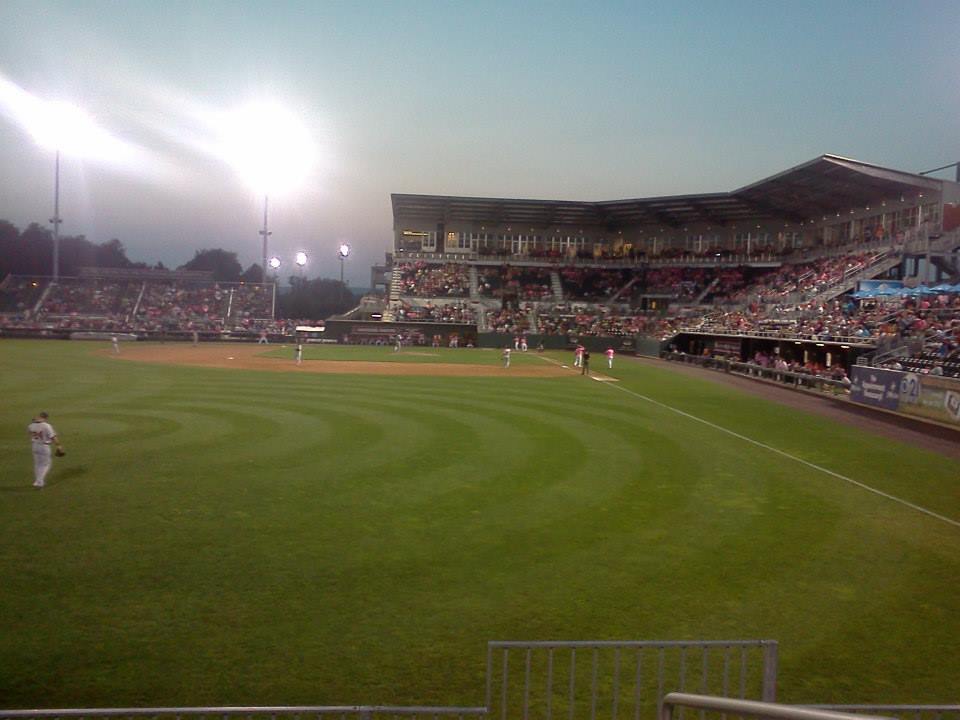 It was, frankly, an unexciting game. Simms gave up a solo home run in the first, then two more runs in the third. Beyond that, there wasn’t much in the way of offense throughout the game. On a local Pennsylvania note, it was interesting that former York Revolution player Brian Burgamy was playing third base for the Mets.

The Senators entered the bottom of the ninth down 3-0, and them the Mets’ closer pulled a LOLMets — a misplay in right field got Jason Martinson to third, a hard hit ball by Ricky Hague ate up the shortstop and the Senators had runners on the corners, a sacrifice fly brought Martinson home for the Senators first run, and before long the closer got the winning run to the plate with men on first and third and two outs.

The game ended on a strikeout by Caleb Ramsey.

This was the first Senators loss I witnessed this season. The Senators have not had a great season — the lack of consistent starting pitching, in my opinion, has a lot to do with that — yet they were 5-0 in games I had attended this year.

There was a good crowd, over 6,000, and perhaps 40 to 50 percent were in pink, either on their arrival or after buying one of the shirts in the shop. It was not a very energetic crowd, probably because the game itself wasn’t very energetic.

I had a good time.

Full-ish moon over the Susquehanna:

The Pennsylvania State Capitol seen from the plaza along the Susquehanna. 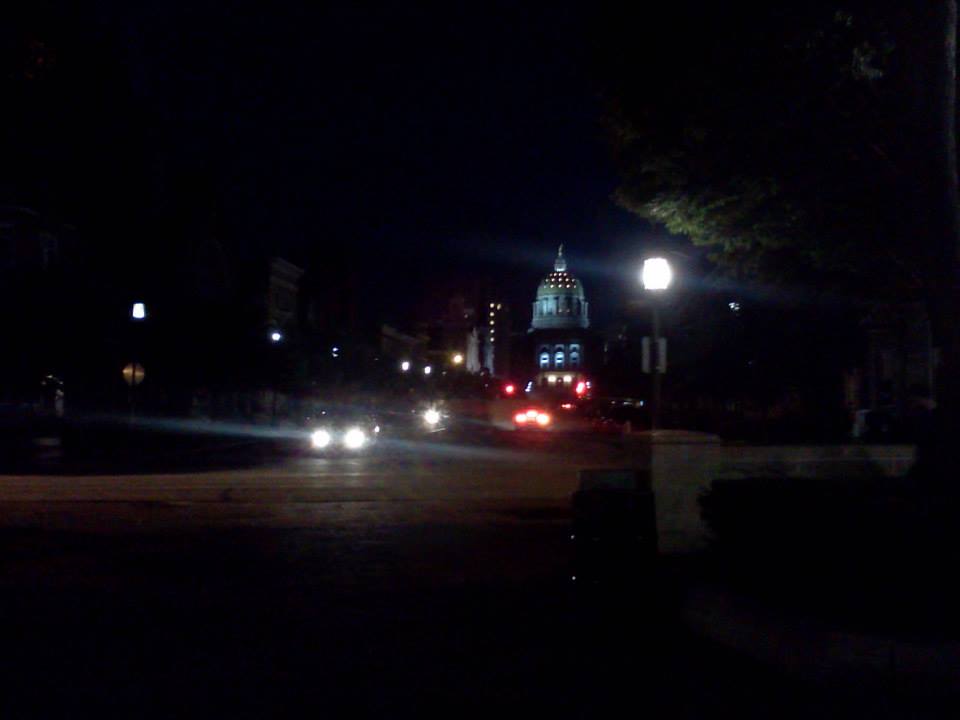 A couple on a bench along the riverfront stopped me and asked if there would be fireworks after the Senators game. Sadly, not last night.

In the State Capitol plaza, I saw some homeless people sleeping on the concrete benches. The distinctive smell of pot wafted through the air.

Along Front Street in Harrisburg, Metro Bank Park as seen from across the Susquehanna: 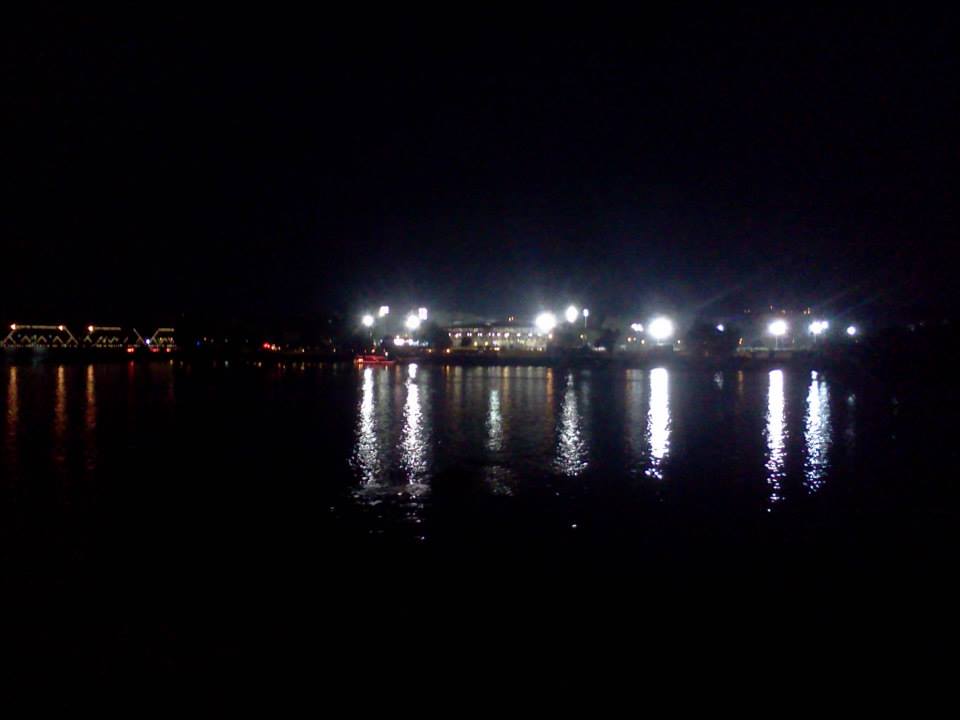