Playoff Baseball in Towson on a Summer’s Night

There’s a reason you play nine innings — in a baseball game, so long as you have outs remaining, no lead is insurmountable.

Last night I went into Towson for playoff baseball, my first in-person postseason baseball game since the fateful Game 2 of the 2014 NLDS between the Washington Nationals and the San Francisco Giants. The Cal Ripken Collegiate Baseball League’s playoffs are this week; Sunday was the wild card game, and last night the Baltimore Redbirds played the victor in that game, the Herndon Braves, in the first game of the semi-finals.

The game started at six o’clock, so I left the office a little past five; the longest leg of the trip in time was York Road, and by twenty to six I had settled into a parking space at Calvert Hall High School. I picked up a game program, took a seat roughly where I sat for Thursday night’s game — right below the press box, to the third base side — made some notes, and prepared for baseball on a steamy night. One interesting (and personal) thing of note to me in the game program was that one of the Braves’ pitchers, Jeremy Larkey, attends Alderson-Broaddus in Philippi, West Virginia; my father was the library director there twenty-five years ago, and I graduated from Philip-Barbour High School there in Philippi. Sadly, I didn’t get to see Larkey pitch last night.

There were ominous clouds to the west, and before I’d left the office I’d seen on Twitter storm warnings for the area. The PA announcer reminded people to stay hydrated; he said the game time temperature was 81, but with the thick humidity it felt far worse.

Just before six, the teams lined up on the baselines, and an a capella tenor sang the Star-Spangled Banner. Line-up cards were exchanged. It was time for baseball to begin!

Pitching for the Redbirds was Maryland’s Hunter Parsons. His first pitch to George Southwestern State’s Even Alnderman was a ball.

After retiring Alderman, Parsons gave up a single to Harford Community College’s Kyle Burger. Parsons struck out the next batter, Middle Georgia’s Andy Mocahbee. Parsons then battled Middle Georgia’s Alan Mocahbee to a full count, one strike away from getting out of the inning, only to give up a no-doubt 2-run home run to left.

After ending the inning with a fly out to right by Georgia Southwestern’s Zach Barron, the Redbirds with in a 2-0 hole after half an inning.

Throughout the inning, the Braves’ dugout on the first base side had been loud. There was trash talking. There was cheering. There was applause and audible groans when strike calls didn’t go their way. On top of that, the crowd, which topped out around seventy people, had a nice contingent of Herndon fans from northern Virginia, maybe about twenty or twenty-five. The result was a nice, competitive, electric, yet friendly atmosphere in Carlo Crispino Stadium during the game.

Herndon’s starter for the night was Derek Boyle, a right hander from Grove City College. Boyle’s night did not start off well; his first three pitches to Virginia’s Cam Simmons were balls off the plate, and his fourth drilled Simmons in the rear. A lead-off hit-by-pitch.

Wake Forest’s Jake Mueller attempted to bunt Simmons over to second, but Boyle was unable to field the ball cleanly and had no play. Two runners on, no outs. UNC’s Kyle Datres grounded into a 6-4 fielder’s choice, putting runners on the corners, but then Maryland’s Marty Costes popped out in foul territory and Virginia’s Ryan Karstetter grounded out thanks to a impressively powerful long throw from Braves third baseman Garrett Zoukis from Cincinatti, ending the Redbirds threat to cut into the Braves’ early lead.

The Redbirds would cut into that lead in the second. Boyle loaded the bases with one out, and Simmons hit a sac fly to right that brought Tulane’s Matt Roland home for the Redbirds’ first run of the night.

In the top of the third, Parsons again faced Alan Mocahbee in a two-out situation, this time with two men on. A passed ball to the backstop scored Alderman from third, and then a double to the wall in the left-center gap scored Andy Mocahbee, putting the Braves up 4-1.

In the bottom half of the inning, Boyle had two quick groundouts, then put Karstetter on base thanks to another hit-by-pitch. Mississippi’s D.J. Miller then smashed a home run to center-left, brining the Redbirds to within 1.

In the fourth inning, Parsons was replaced on the mound with Virginia Tech’s Culver Hughes. He got into trouble quickly, loading the bases, but a groundout to short ended the Braves’ threat.

The Redbirds loaded themselves in the bottom half of the inning with two outs (the third base runner coming on Boyle’s third hit-by-pitch, this time to Datres), but Marty Costes popped the ball up on the first pitch he saw from Boyle, a pop-up easily caught by first baseman Alan Mocahbee along the baseline between first and home.

Boyle’s night on the mound for the Braves came to an end in the fifth. He struck his fourth batter on the night (this time, Matt Rowland) and had runners of the corners after a sacrifice fly by Pittsburgh’s Manny Pazos. He then balked in the tying run when he attempted to pick off Rowland at first and, with Rowland at second after the balk, Utah Jones hit a single into right that scored Rowland from second who beat the throw at the plate. That was enough for Boyle, and he was replaced on the mound by Ursinus’ Mark LeDuc.

LeDuc, unfortunately, put the first batter he faced, Cam Simmons, on base with a hit-by-pitch. Jake Mueller then drove the ball into the right field corner, scoring Jones from second. Simmons was caught in a rundown between third base and home plate and, though he evaded a tag by the catcher along the baseline, he was tagged out at the plate by one of the infielders for the inning’s third out.

The Redbirds had put three runs on the board, taking a 6-4 lead after five. They would tack on four more runs in the bottom half of the eighth inning off of Salisbury’s A.J. Korcynski and Wheaton’s Jack Fant.

As the game wore on and the sun set, storm clouds moved in from the west. The humidity subsided, the temperatures fell to something pleasant, winds picked up, rain could be smelled in the air. By the seventh inning I wondered if the game would finish or if a deluge would halt it. 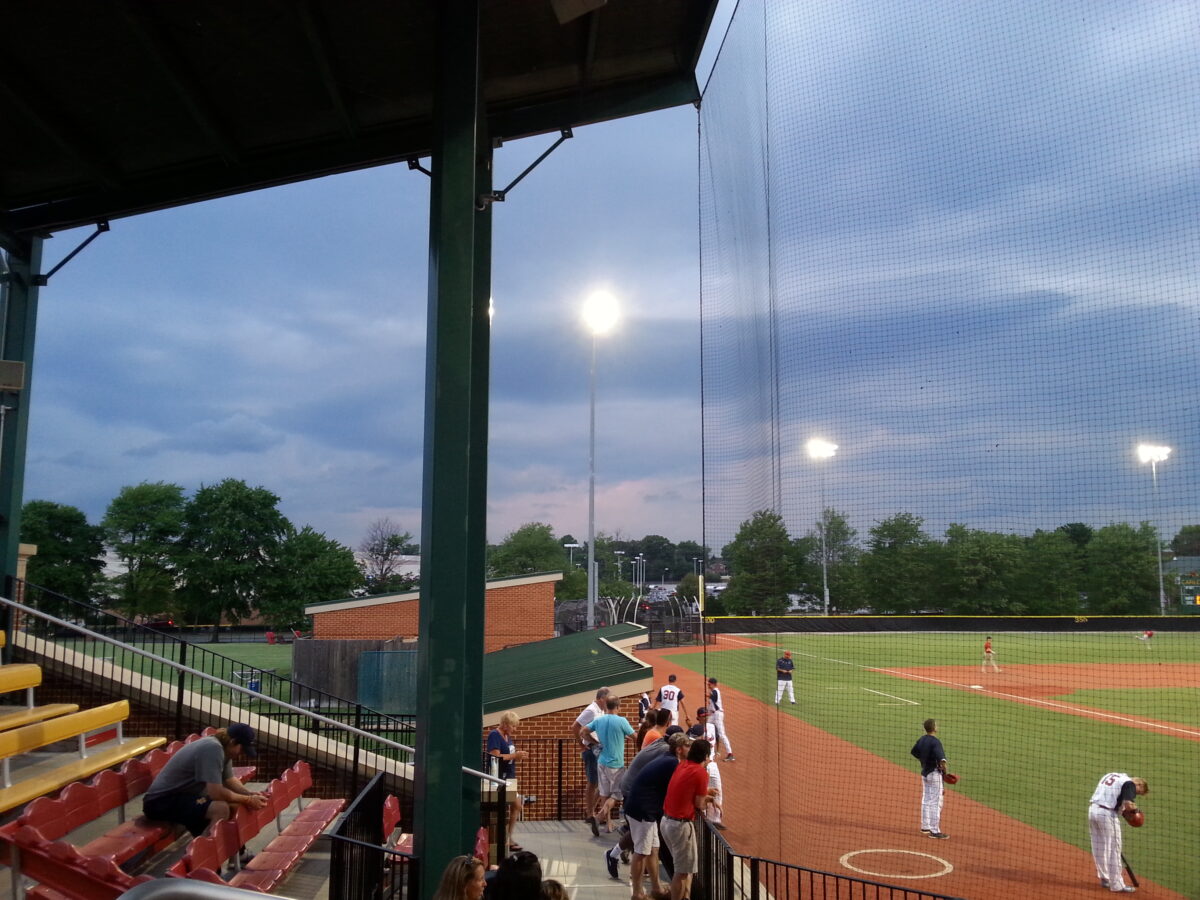 Someone sitting near me noticed the notebook I had where I was keeping track of the game. “Are you scouting someone?” he asked me during a pause in the action.

“No,” I said. There was someone scouting down front; he had a radar gun, and I noticed him making notes in his own notebook. I felt the need to elaborate on my answer. “I’m just a writer. Never really got the hang of keeping a traditional score sheet, so I keep notes, like a college student. Pitch by pitch, play by play. Then I can reconstruct the action later.”

I shrugged. “Not really. It sounds more difficult than it is, and it’s probably more work than is necessary, but I get more detail, and it’s a system that works for me, which is why I use it.”

He then went on to talk about some high school pitchers he’d seen in Georgia that were hitting 85 miles an hour on the radar gun. He didn’t stay through the game, leaving around the sixth inning.

Left hander Andrew Miller from Maryland was brought on for the Redbirds in the top half of the eighth. After a clean eighth inning, Miller ran into trouble in the ninth. As I said up top, as long as there are still outs, there’s always a chance, and the Herndon Braves found a chance in their final outs. They would not go gently into this good night.

After two quick outs, bringing the Braves to their final out, Miller allowed a single to Even Alderman, and another single to Kyle Burger. Following a visit to the mound by the manager, Miller then allowed a walk to Andy Mocahbee, loading the bases for Alan Mocahbee, a player who had terrorized the Redbirds’ pitching all night, beginning with that first inning home run. One swing of the bat here could pull the Braves to within two runs. There wasn’t a soul in Carlo Crispino Stadium who didn’t know it.

Second pitch. A ball, outside.

Third pitch. A foul back into the screen.

Game one of the semi-finals was in the books. Redbirds 10, Braves 4.

The Redbirds celebrated the win on the infield, while the Braves went off to right field and met as group to discuss the game. There was no team-meets-team handshake line as during the regular season games.

Meanwhile, the fans filed out of the stadium into the night.

Despite starting at six, it was past nine when the game ended, and it was already quite dark; the days have become noticeably shorter since the summer solstice.

All in all, it was a lovely evening for baseball.

Game two of the series is tonight in Vienna, Virginia. If there’s a decisive game three, it will happen in Towson on Wednesday night. Depending on work, I might attend game three.

If the Redbirds prevail in the semi-finals, they would play the winner of the other semi-final round, the Bethesda Big Train and the Gaithersburg Giants, beginning Friday evening in Towson. Right now, the Big Train have a 1-0 lead in that series.