Part of Diamond’s culture revolves around the daily “Service Anniversaries” e-mail. HR sends out an e-mail to the entire company acknowledging those employees who are celebrating an anniversary, and then people throughout the company, some you’ll know, some you won’t, will send you congratulations. Suffice it to say, my email inbox was overflowing with congratulations on my ten years on Wednesday.

Some people reply to these congratulations individually. Others wait and send out a group thanks. I’ve done both over the years; it’s easier to keep up with the former, the latter takes a little work. Heck, some people don’t even acknowledge the congratulations at all. 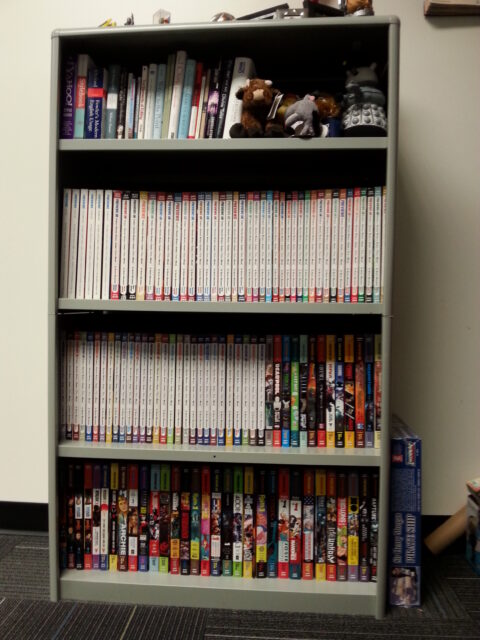 I sent out a group reply at the end of the day. I’d finished writing a catalog section for the July issue of PREVIEWS — my one hundred and twenty-first issue — and, without any other pressing task, started to compose. I had a rough idea of what I wanted to say on the occasion of my tenth anniversary — I knew the anniversary was coming and had pondered it for a few weeks — but when I knuckled down to write I struggled to begin. I don’t know how many openings I tried, nor did I keep track of the material I discarded, but the openings were many and the blind-alleys were extensive. Eventually — two hours later! — I had something I was happy with, though I see now that it needed a little more polish.

What follows is that group response:

I wanted to take a moment and thank you for the congratulations and well-wishes on the occasion of my tenth anniversary with Diamond. I spent part of the day trying to think of something profound and witty to say, but in truth words fail me. Marketing gave me a card this morning, and I truly had to fight back tears; it wasn’t the kind of thing I expected.

When I think about when I started with Diamond a decade ago, I couldn’t have imagined being here ten years later. Honestly, I thought I’d stay six months, leaving when my grandmother died. But she lingered on, I had a talent for the work (writing at the scale that I do doesn’t daunt me and I learned more about VBA programming than I’d have ever learned otherwise), and after she died I’ve stayed.

I would struggle to point out things that I’ve worked on these last ten years that I’m truly proud of because I’ve worked on so much over the years that they recede into the distance; I finish something, I’m already into something else, and the feeling I remember is not the satisfaction of completion but the stress of the process. I’m very self-critical, as anyone who has read my self-appraisals knows, and I almost always feel better about what I’ve done, once I’ve had time and distance to reflect; I may hate what I wrote in PREVIEWS one month, but if I reread it two months later I find it’s nothing to hate at all. I think that I make what I do look easy, when it’s really nothing of the sort, or like magic, when really all I did was to solve a problem that anyone could have solved given the time and understanding.

I enjoyed going to the Retailer Summit in Chicago this year. As I said to anyone who asked, it was my first Diamond trip in my ten years here. I didn’t know what to expect, I wasn’t always sure what to do when I was there, I certainly enjoying signing copies of PREVIEWS for people who came to the booth at C2E2, and I saw some things that we can do better in the future (things that I’ve made notes on but haven’t yet turned into anything coherent). But what I enjoyed the most came when we were handing out the exclusive comics to retailers after the dinner Friday night.

I handed the retailers three comics — two Dark Horse titles, one IDW title — but that wasn’t, for me, anyway, the thing that truly mattered. What mattered was that I said, to each and every retailer, “Thank you for coming.” Sometimes, “Thank you for being here.” Or, “We couldn’t do this without you.” Our retailers are our customers, we’re in business thanks to them, we value them, and it was important to acknowledge that and say that. The thing I always tried to instill in my staff as a manager for EB Games (where our company value statement was “It’s all about the customer”) was to treat our customers like they were friends, to welcome them into our space, and to thank and appreciate them. It’s a little thing, and those little things go a long way.

I’ve rambled on a fair bit, as anyone who knows me knows I’m wont to do.

Again, thanks for your kind wishes. I couldn’t do this without you.