Sometimes I’ll listen to NPR’s Wait, Wait Don’t Tell Me. Until a few months ago, Wait, Wait had a blog called “Sandwich Monday” where one of the interns would go in Chicago, buy a sandwich of some description, maybe fast food, maybe something local, and the team would eat it, photographing the sandwich and their reactions, documenting the whole thing.

It was usually pretty funny.

There’s a sandwich that calls out for the “Sandwich Monday” treatment, and if the Wait, Wait team isn’t here to do it, then I will!

We have scrapple sandwiches! Have you tried one yet? pic.twitter.com/510KLJs4D7

Now, I’m a fan of scrapple. I don’t want to think about what’s in it. All I care about is that I like it. I like how it tastes. I like eating it.

When I needed gas for the Beetle a few days ago, I stopped at Royal Farms and ordered one of their Scrapple Breakfast sandwiches. I had to see for myself what that was like. And here’s how that turned out…

Tragedy! Woe! I went to @Royal_Farms for one of their scrapple breakfast sandwiches… and they were sold out! Sausage is no substitute.

This morning, I needed to gas up the Beetle again, and I stopped once more at Royal Farms. I decided to give them another shot…

And they had scrapple! They could make the sandwich!

I ordered the sandwich, went into the office, and unwrapped it… 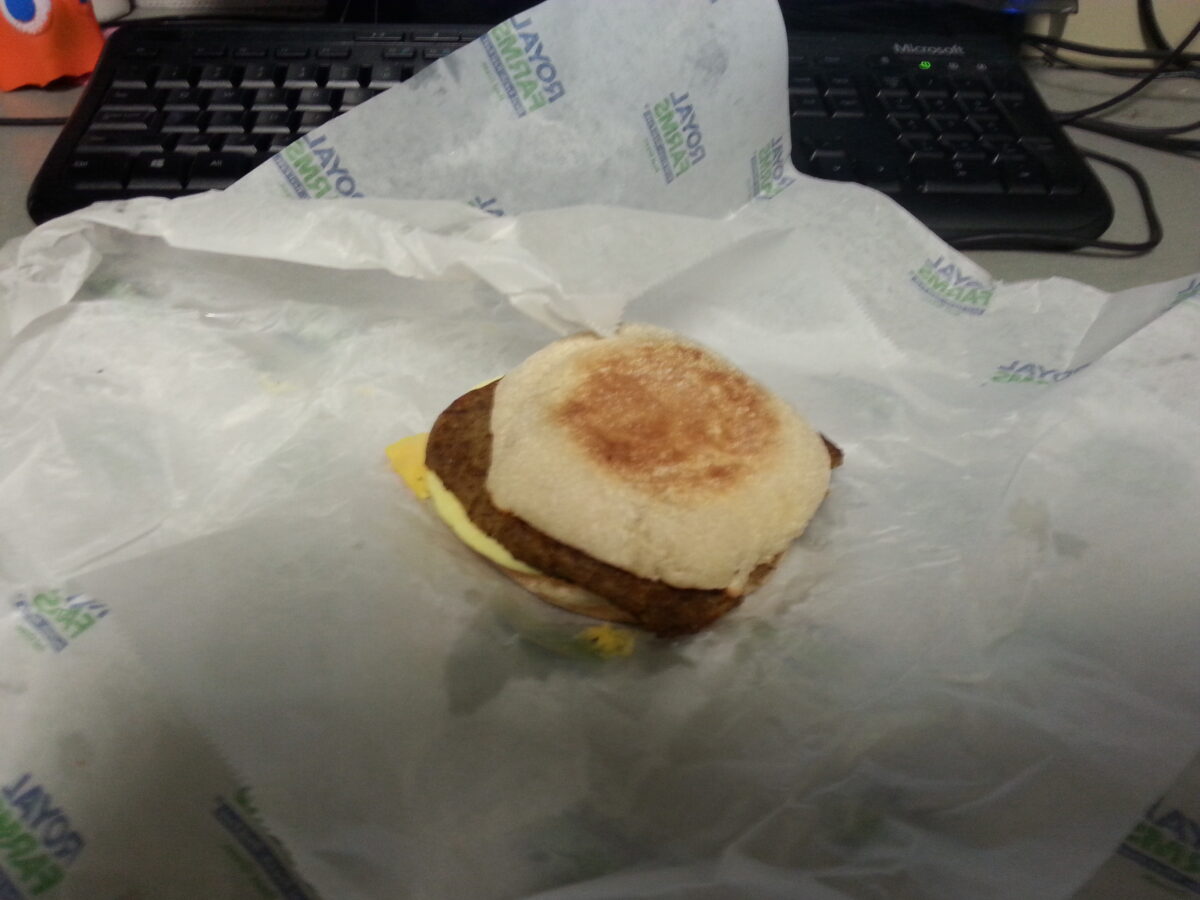 I decided to keep it basic — an English muffin, the scrapple, egg, and American cheese.

Think of it, then, as an Egg McMuffin with scrapple instead of Canadian bacon. 🙂

The scrapple is rather dark, isn’t it? I like my scrapple a little more gray, and it definitely needs to be crumbly. This scrapple seemed… well, it seemed a little sturdy.

I was ready to take a bite.

The first thing I noticed was how salty the scrapple was. I mean, really salty. Like it had been marinated in brine and then salted for good measure, that’s how salty it was. Like “there’s a little water in my salt” salty.

Then as I chewed, I noticed how dry the scrapple was. Like, really dry. It wasn’t moist at all, and because it wasn’t moist it wasn’t at all crumbly. It was like they had grilled the scrapple until it was an ember and then slapped it on the muffin. It was so dry it had the consistency of sausage.

Verdict? The Royal Farms Scrapple Breakfast Sandwich, at least in my configuration, was pretty disappointing. It wasn’t enjoyable. The point of scrapple had been utterly missed.

I’d say there’s a 100% chance that I won’t try another. As a curiosity, it was worth trying once. But they really need to fix the scrapple for the sandwich to be worthwhile.