Scenes from a Vacation Day

On Thursday, I took a vacation day and went to Washington, DC. The Washington Nationals were having Pet Day — with a special ticket, you received a 2015 calendar of the Nationals players and their pets, you could participate in a pre-game petting zoo, and part of the cost of the ticket went to the local humane society.

“Why not?” I said. Why not, indeed, and last week I bought the special ticket.

I left home the same time I would leave for work in the morning, a little past eight, and I stopped at the Barnes & Noble in Pikesville. What I wanted was a copy of Andy Weir’s The Martian (I could remember the title, but not the author, and had to walk around the Science Fiction section until I found it), and I also bought a copy of Doris Kearns Goodwin’s The Bully Pulpit, her history of the relationship between Theodore Roosevelt and William Howard Taft, off the bargain table.

While looking at the bargain racks, this is a conversation I had with myself when I saw that Barnes & Noble had published a leatherbound edition of Sir Thomas Malory’s Le Morte d’Arthur. As it was shrinkwrapped, I could handle it, but I couldn’t look at it. 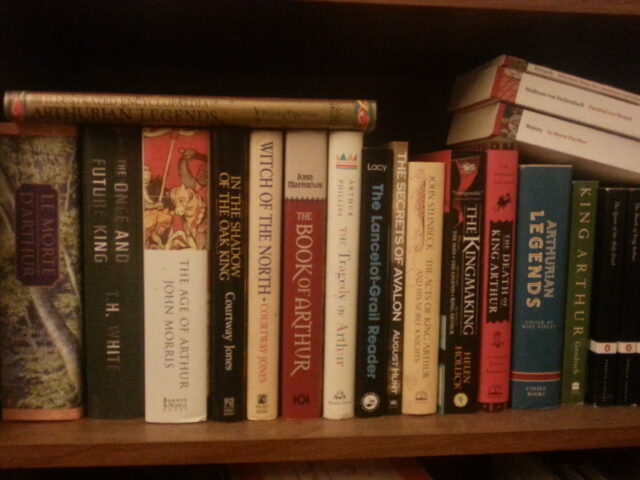 “Why? You have three copies of Malory at home. One is the paperback you bought and read in college. The second is an illustrated hardcover edition you bought ten years ago. The third is the Oxford abridgement of the Winchester manuscript you bought last summer. You don’t need this.”

“It’s leatherbound! I want it!”

“Look! A leatherbound edition of two Doctor Who novels! The Silent Stars Go By and Touched by an Angel! I want it!”

“Why? You already own both boooks. You already have two copies of Touched by an Angel. You didn’t even like it.”

“You don’t need it. At best you’ll clear space on the bookshelf for it, then wonder what you were thinking when you bought it the next time you move and have to either pack it or give it away. You are not buying it.”

I took the Green Line into DC from the Greenbelt station (and I think this is the first time I ever had to pay to park at Greenbelt, but that’s mainly a function of usually going to DC on the weekends or holidays), and hopped off at the Navy Archives stop. It’s a good stop; it puts you in the city behind the National Mall, and two blocks you’re there. It’s also the site of the Navy Memorial and the Navy Museum. And since it was my late grandfather’s birthday, it was an appropriate place to be.

From there I went to the National Gallery of Art which, in recent years, has become my favorite of the Smithsonian museums. I don’t know how many times I’ve gone through the Dutch and Flemish collection over the last hemidecade, yet I make a point of walking through it every time I go. There are paintings by Rembrandt and Van Dyke, and many of them are of people I remember from my college history classes. For instance, this painting of Henry, Duke of Gloucester, the youngest son of King Charles I. 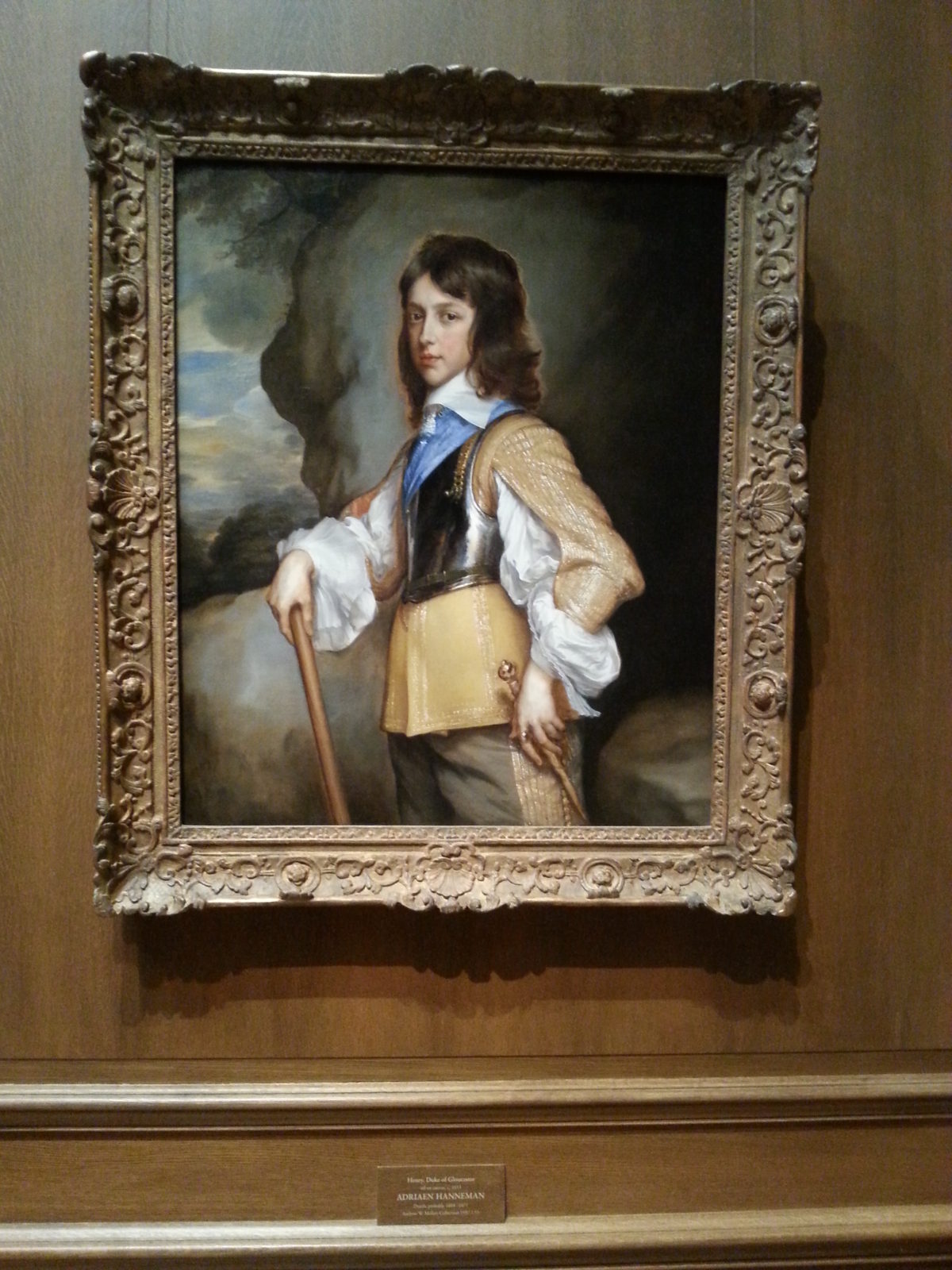 There was an exhibition of homegoods from the Revolutionary and Early Nation periods. I was particularly taken by this wall clock that featured an image of Perry’s victory over the British on Lake Erie:

The museum’s main exhibition was of the work of Gustave Caillebotte, one of the minor Impressionists. That exhibition was rather cramped and the galleries were packed.

From there I went to the Museum of American History. Though there hasn’t been anything new displays there in what seems like a few years (one wing of the museum is under reconstruction), there was something interesting going on — Max Impact, the Air Force’s official rock band, was performing as part of a summer concert series at the museum.

I thought about going to Air & Space, but I didn’t feel like waiting in the security line. Instead, I walked about the Mall, much of which is under construction as they’re resodding the grass and making other improvements.

From there I went down Pennsylvania Avenue in the direction of Congressional Cemetery. I have ancestors that are buried there, and it’s an interesting place to visit and explore.

This time I took a look at burial slabs (because I’m not sure what else to call them) from the 1810s to 1830s. These slabs, basically, are like tombstones but placed horizontally across the grave instead of horizontally. There are two things of note about these slabs. The first is that while some rested directly on the ground, others were set atop pillars. The second is that these slabs were inscribed with long, carved messages (which ran the entire length of the slab, usually about six feet) and, surprisingly given the age of the slabs, these messages were still readable. (Headstones of a few decades later are usually weathered and worn to the point where they’re no longer readable.)

I also did the usual things I do there — visit my great-great-grandfather’s unmarked grave, visit John Philip Sousa’s grave, visit the burial vaults, take a look at the cenotaphs designed by Benjamin Latrobe, that sort of thing.

The day was wearing on, and the gates for the petting zoo opened at 4:30, two and a half hours before the game. Rather than make my way to Nationals Park directly, I went west along G Street which took me past Christ Episcopal Church, an historic church which John Adams and Thomas Jefferson attended and of which John Philip Sousa was a member. I also suspect, but could not prove, that my great-great-grandfather attended there; he and his family lived in the area and, despite its name, Congressional Cemetery was and still is affiliated with this church, which could be why he’s buried there.

Unfortunately, the petting zoo was cancelled.

The @nationals have cancelled the petting zoo. I am crushed. 🙁

I had so been looking forward to the Pet Day Petting Zoo. That, more than the Pet Day Calendar (which is nice, and I didn’t notice anyone else with one), was why I bought the special Pet Day ticket for the game and took off a day from work to come down to DC. A “mental health day,” I called it.

I live in an apartment complex that doesn’t allow pets. (I could move, but I’d leave Pennsylvania — and my job — entirely if I did. A little move isn’t worth it to me to just have a cat.) The thought of baby goats and sheep and kittens and puppies made me happy. And the previous forty-eight hours (Tuesday and Wednesday) were unsettling; my old high school in West Virginia witnessed an armed hostage situation (which, thankfully, ended with no bloodshed) on Tuesday, and I don’t need to mention what happened near Roanoke on Wednesday. By Wednesday night, I felt the weight of psychic distress bearing down on me, and the petting zoo I was certain would be a welcome release.

Sadly, it wasn’t to be. The deejay in center field was not as exciting.

Things happen and plans fall through. Let me be clear, I’m not blaming the Nationals for this at all; the reasons were almost certainly outside their control. The best-laid plans sometimes just don’t happen. I know that.

Still, there was a baseball game to enjoy — the Nationals and the San Diego Padres.

I tried the Samuel Adams Nats Anniversary IPA. I have to be honest, I wasn’t a fan. I don’t enjoy IPAs a lot. Give me a stout or a porter any day. I also had a frozen margarita tube, so by the time of first pitch I wasn’t feeling a lot of pain. 😉

As the game started, I took notes as I do. I don’t know how to fill out a scorecard, so I have a different notetaking system that works for me, which breaks the game down pitch by pitch.

The crowd continued to arrive into the third inning, and then around the seventh inning the crowd started to leave. By the end of the game, there weren’t many people left in my section; the last people in my row left in the top of the 8th.

The game was notable for the various defensive shifts the Nationals had to make due to injury. Yunel Escobar was hit by a pitch and left the game, which shifted Anthony Rendon to third and brought in Danny Espinosa to play second. Then when Michael Taylor ran into the outfield wall and banged his knee, Taylor was replaced by Bryce Harper in center, Jayson Werth moved from left to right, Epinosa moved to left, and Trea Turner came in to play second.

The Nationals won, 4-2. Jonathan Papelbon came in for the save with a three run lead, walked the first batter, balked him to second, and gave up a ground ball single to bring in a run. Then he got the final out, and it was time for Happy Handshakes!

After that, there’s nothing to tell. A short walk to the Navy Yards Metro station, a drive from Greenbelt back to York, and then to bed.

A good day was had. It was a lovely day in the District, not too hot, not too humid. I walked a lot, and I have lovely tan lines at my ankles. I should do more days like this.