Signs of Natitude in Harrisburg

About a month ago, one of Harrisburg’s radio stations, the River 97.3, posted a question on their Facebook page that went something like this — what’s your happiest place on Earth? I was characteristically specific with my answer — “Section 303 Row 8 at Metro Bank Park.”

The next morning, I got my Beetle, pulled out of my apartment complex, and Glenn Hamilton of the Glenn & Bob Show read off a few of the comments they’d received on the Facebook question. To my everlasting surprise, Glenn read off my answer, and then he added, “Senators baseball, it’s coming real soon.” He sounded happy; maybe he needed the thought of summer and baseball, too. Hearing it on the radio certainly brightened my day; we still had snow on the ground that lingered from February.

The likelihood of me hearing my response to the Facebook question was extremely low. I listen to the River for about twenty minutes in the morning and for about twenty minutes in the evening, basically from the apartment to the Maryland state line and back. but I also listen to York’s classic rock station, the Peak 98.5, or WITF, the NPR station, or Philly’s WXPN on its repeater. Maybe I was supposed to hear that. Maybe I needed to hear that; it was a long winter.

Yesterday I was in Harrisburg for jury duty, and I discovered during the interminable wait that I could see Metro Bank Park from my vantage point on the seventh floor of the federal building. Suffice it to say, I lingered at the window.

I could see they were preparing the field for Opening Day on Thursday. (I have an Opening Day ticket as part of my 13-game plan for 2015, but I won’t be able to attend. Publishing deadlines.) It looked like they were testing lights on the scoreboard, and I could see people moving about. “Once I get out of here,” said I to myself, “I’m going over to City Island to take a look at the park.”

I received my freedom — the case to which I had been assigned was settled with a late plea deal — and I set off across the Walnut Street pedestrian bridge. The closer I got to City Island, the more joy and happiness I felt in my heart. Really, a baseball stadium, even one without a game, may really be the happiest place on Earth.

I turned a corner at the end of the bridge, faced Metro Bank Park’s entrance, and beamed. They had redecorated. 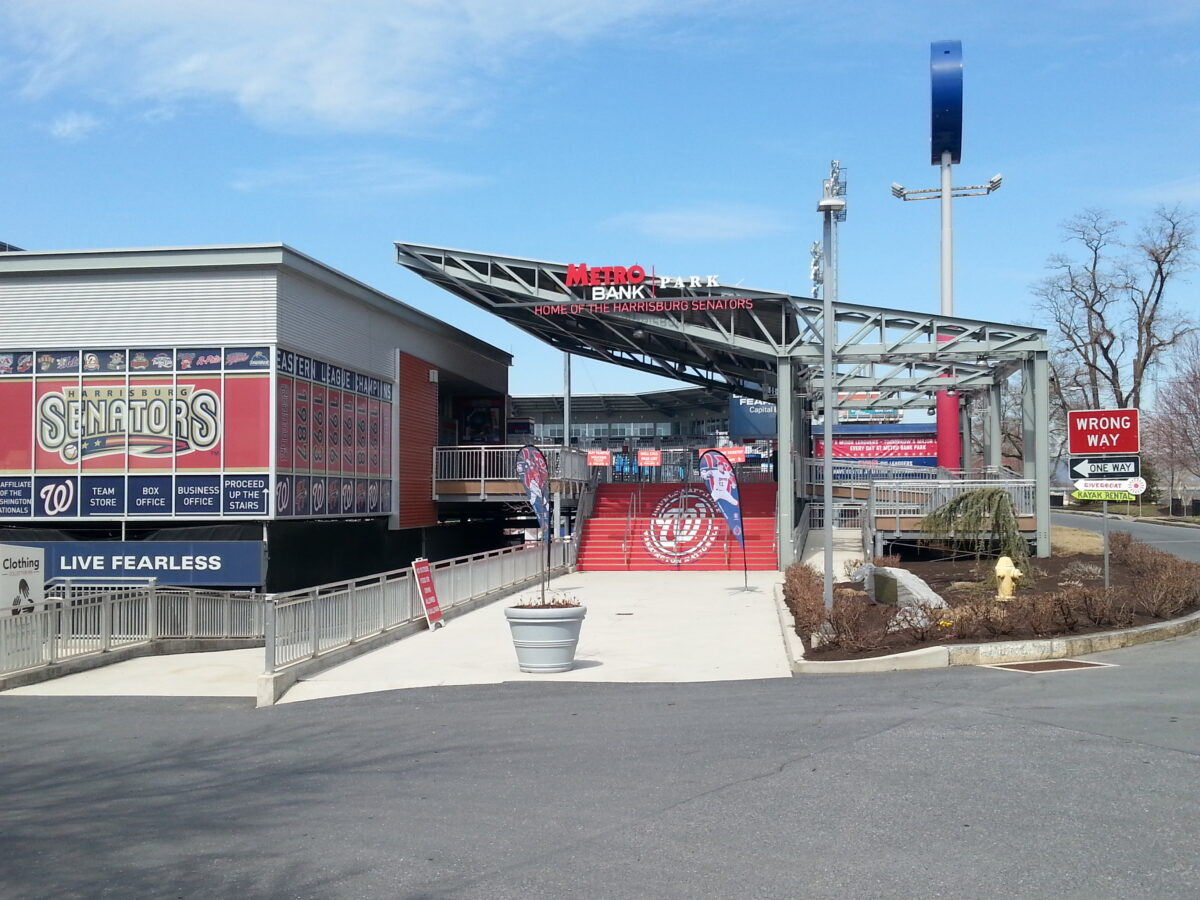 Yes, the steps leading to the main gate have been decorated with the Washington Nationals logo. You walk into Metro Bank Park, and that’s the first thing you really.

The Senators have never been shy about their connection to the Washington Nationals; the Senator’s offices, as you can see, are decorated with the Curly-W. Taken together, these signs send a powerful message — “We’re part of the Washington Nationals family, we’re not shy to say so, and we’re proud of our connection.” On top of the local radio deal for Nationals games, it feels like the Nationals are throwing down a marker and saying, “This place, Harrisburg, is ours.”

I stood there and grinned. How could I not?

A few hours later, the Senators sent out this Tweet to promote the entrance:

Flags are up. 3 days to go. pic.twitter.com/IUhwLljs9P

We have signs of Natitude in Harrisburg, like the arrival of flowers in springtime.

Let’s look at the flags. The flag at the entrance on the right was Jordan Zimmermann.

On the left, Michael Taylor.

The Senators couldn’t have picked two better choices to great fans as they enter — Zimmermann is still fondly remembered in Harrisburg, and Taylor, though he hasn’t yet proved himself at the major league level, was one of last season’s bright spots on City Island and had a memorable season.

Once I had taken in enough of the Nationals logo this fine spring day, I turned to walk around the grandstand and a couple in their fifties asked me, “Who are they affiliated with? The Phillies?”

After I got over my shock that they were addressing me since I was lost in a reverie, “No,” I said, “the Nationals, and they’re proud of it. The Phillies are over in Reading.” I walked away and shook my head. How, I wondered, could they miss the Curly-Ws everywhere? Sometimes, seeing the thing right in front of your face is the hardest thing in the world.

The grandstand looks ready. I can even see about where my ticket plan seat is — in the left-most section in the grandstand, along the central aisle, about five rows down from the top.

You can’t really see it through the fence, but section 303, my happiest place in the world, is in the bleachers to the left of the grandstand.

One final picture before I departed City Island:

A roadside historical marker commemorating Harrisburg’s Negro League team. I’d seen it before, but usually there were other things happening like pony rides and the kiddie train and crowds that kept me from snapping a picture.

And, with that, I left City Island until Sunday when I’ll see this 2015 Senators take on the Altoona Curve. And I should get a Jordan Zimmermann pint glass as part of the day’s giveaway, too.

Baseball is back, and I couldn’t be happier. 🙂