Springtime is for Baseball

It’s been away, far too long. Spring has come, flowers are beginning to bloom, trees are starting to leaf, and on delicately maintaining fields of grass boys and men take up the ball, the bat, and play nine innings.

Last night was my first baseball game of the year. The Reading Fightin’ Phils were in Harrisburg to play the Senators, a match-up of the Phillies and Nationals’ AA squads.

It was also Vladimir Guerrero Bobblehead Night, as Vlad was being inducted in Harrisburg’s Life-Size Bobblehead Hall of Fame.

The gates opened at 4:30 for a 6 o’clock game. I got to City Island a little past four, not because I wanted the Vladimir Guerrero Bobblehead giveaway (honestly, I could have gone either way on this) but because I like getting to the ballpark early. I like seeing the ballpark empty (or almost empty), I like to see a little of batting practice, I like to see the grounds crew get the field ready for play.

The Fightin’ Phils were on the field, taking batting practice.

A new concession at the ballpark this year — the RJ Harrisburger.

It’s a half pound chopped steak hamburger patty cut in two, topped by pulled pork, grilled onions, and grilled peppers, stuffed in a 6 inch sub roll. Supposedly, there’s also melted pepper jack cheese. I say “supposedly,” because if it were there I could neither see it nor taste it.

I wouldn’t have ordered this had I not been famished. I neglected to eat lunch, so this doubled up. The burger patty was very dry. The pulled pork was nice and had a sweet sauce. Overall, it worked. Obviously, given its toppings, it was also very messy.

Would I recommend it? It’s not a bad meal, by any means, and it stuck with me until breakfast.

Metro Bank Park has been renamed FNB Park. Last year, Metro Bank was bought by First National Bank, hence the rebranding. The logo for FNB Park works; the flag theme of the logo works with the Senators’ own branding quite well.

And, it’s always nice to see the Stephen Strasburg banner over the stadium entrance. 🙂

On the outfield wall, the Senators have a banner commemorating their 30th-anniversary. The current incarnation of the Senators (there were earlier ones) returned to City Island 30 years ago. (I bought a baseball cap yesterday with the anniversary logo.)

Also, the Senators have moved Jackie Robinson’s #42, retired throughout professional baseball, from the left field corner where the visitor bullpen is to the outfield wall. I always thought that was a weird and little-seen place for it to be, so it’s nice to see that it’s prominent.

As an asside, when I was at a Lynchburg Hillcats game last year, they didn’t have #42 retired anywhere in the stadium at all that I could see.

When the Senators players were stretching pre-game, I noticed they were wearing throwback-style jerseys, with script based on the late-90s design that Vladimir Guerrero wore as a Seantor.

This was interesting, hence my need to capture it on “film” — the Senators have sponsors for the foul poles this year, Turkey Hill.

The induction ceremony began. The Senators’ general manager and president came out with Guerrero. Each gave a speech about Guerrero’s career, both as a Senator and as a major league player.

Guerroro threw out a ceremonial first pitch to former Expo and Cub, Michael Barrett. I think of Barrett as a Cub, and his Cubs career is notable for decking A.J. Pierzynski and fighting with Carlos Zambrano in the dugout. In recent years, Barrett has been managing in the Nationals’ minor league system, and I believe he’s currently the Catching Coordinator for the Nationals system.

Game time approached, and starter Reynaldo Lopez and catcher Spencer Kieboom came in from the bullpen.

That solemn ceremony, the National Anthem.

First pitch! My first baseball game of the year, and highly touted Nationals prospect Lopez is on the mound. I hope, sometime this season, to see Lucas Giolito.

Minor league baseball is notable for its weird games, both during the game and between innings.

During the game, new this year there was the Pizza Hut K Man. This is (was?) something the York Revolution do (did?) — a player from the opposing team’s line-up is selected as the “K Man of the Game.” If he strikes out, at any point in the game, everyone present wins free breadsticks at Pizza Hut. In York, when the Pizza Hut K Man comes up to bat, the crowd chants, quite loudly, “Breadsticks! Breadsticks!” Because this is brand-new in Harrisburg, there’s no fan routine. Hopefully, there will never be; the “breadsticks” chant is annoying as heck.

We all won breadsticks, by the way.

Then there was the t-shirt toss. This year, it was done it twice. First, there was the T-Shirt Gatling Gun, in which an air-powered gatling gun was driven around the field to shoot out t-shirts at high speed. Then, a few innings later, there was a more traditional t-shirt toss. Almost exactly like last year, I had a t-shirt land in my lap. There are people trying for t-shirts, I’m not trying, and I ended up with a t-shirt. So, I tossed the t-shirt to a group of kids from a local 4-H group two rows down. 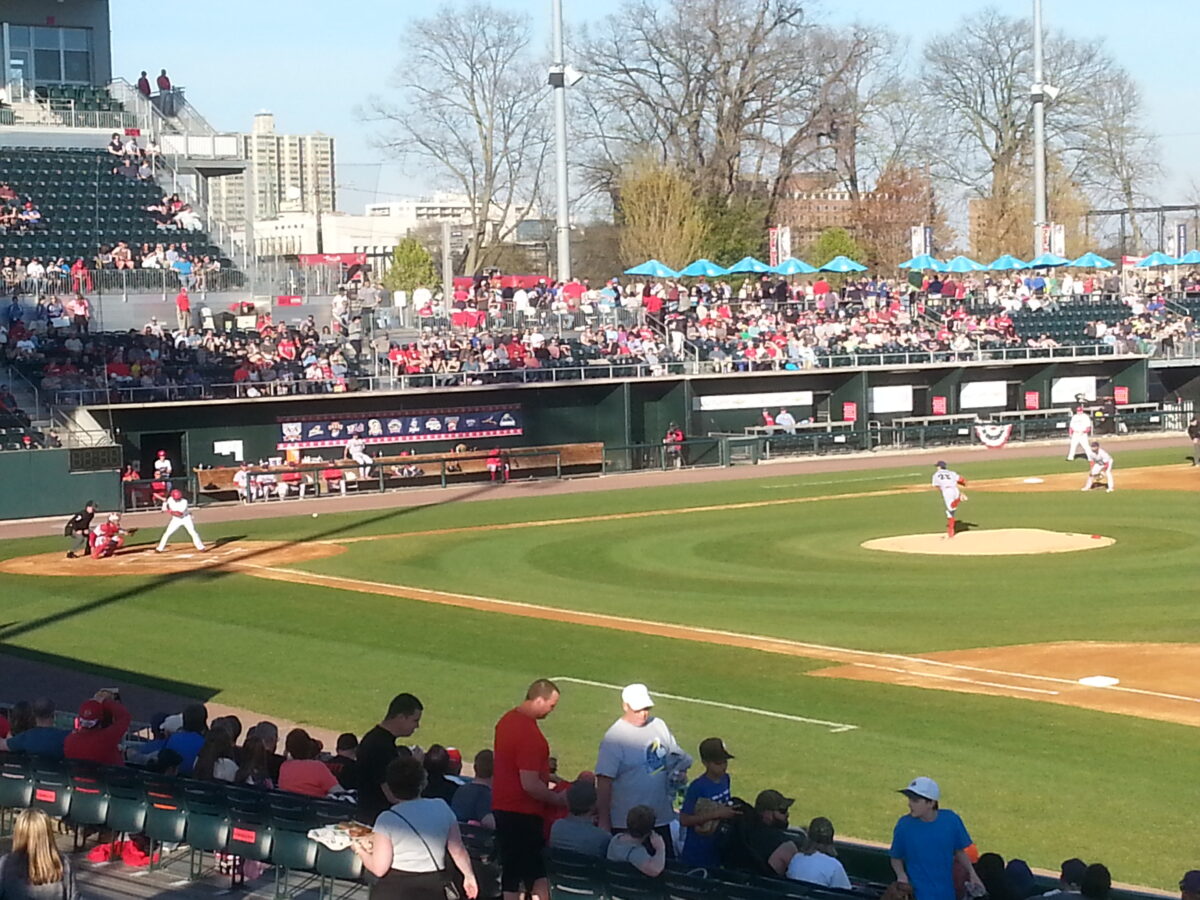 Then there’s this thing, the Brew Ball Battle. I’m not sure I can explain this.

There are four teams of two, one in that bouncy get-up, one not. The bouncy ball people would have to run to the hula hoop (“It’s for kids!”) in the center and then run back to their partner. But those bouncy ball things would smash into each other, and then they’d fall down and have to get up. They had to do this three times, from the partner, to the hula hoop in the center, and back to their partner. It was wild and weird. I wasn’t expecting so, so I didn’t film it. Maybe I should have.

Shadows creeped across the field.

At game time, the temperature in Harrisburg was near 75. As the sun went down, a wind off the Susquehanna whipped up, and as the sun fell behind the bleachers it became quite chilly.

Lopez gave up two home runs. The Senators couldn’t muster anything against Reading’s starter. The Senators fell to the Fightin’ Phils, 3-1.

The wonderful thing about a game that starts at 6 o’clock is that the sun’s barely set by the time the game is over. City Island was bathed in beautiful twilight.

Guerrero signed autograph cards from 6 o’clock to 7:30 seated next to this, and the line on the boardwalk for that was very long, which is probably why the ballpark felt so empty. (The attendence was 4,200-ish, which is a decent crowd.) I did not get Guerrero’s autograph; I didn’t want to miss the game.

This was the first player number the Senators have retired, and it’s easy to understand why — players don’t have careers in the minors that are “worthy” enough to justify a number retirement. They don’t have the longevity with a single team, a player who puts up numbers gets promoted, a player who doesn’t perform gets released.

As I left the ballpark, a man saw me with the Guerrero bobblehead box in my hand.

“I’ll buy that off of you for five bucks,” he said. He seemed a little unsteady, a little drunk.

“Fifty and I’ll consider it.”

I never even broke stride.

I walked across the Walnut Street bridge into Harrisburg, as it my wont. It’s a pleasant walk, and it gives traffic on City Island some time to clear. I had nowhere I needed to be, after all, so why get in the Beetle and sit in traffic? That’s never made sense to me. 🙂

I walked along Front Street, then up towards the capitol building.

St. Patrick’s Cathedral and its green dome looked amazing in the twilight of sunset.

Then to the capitol building itself. 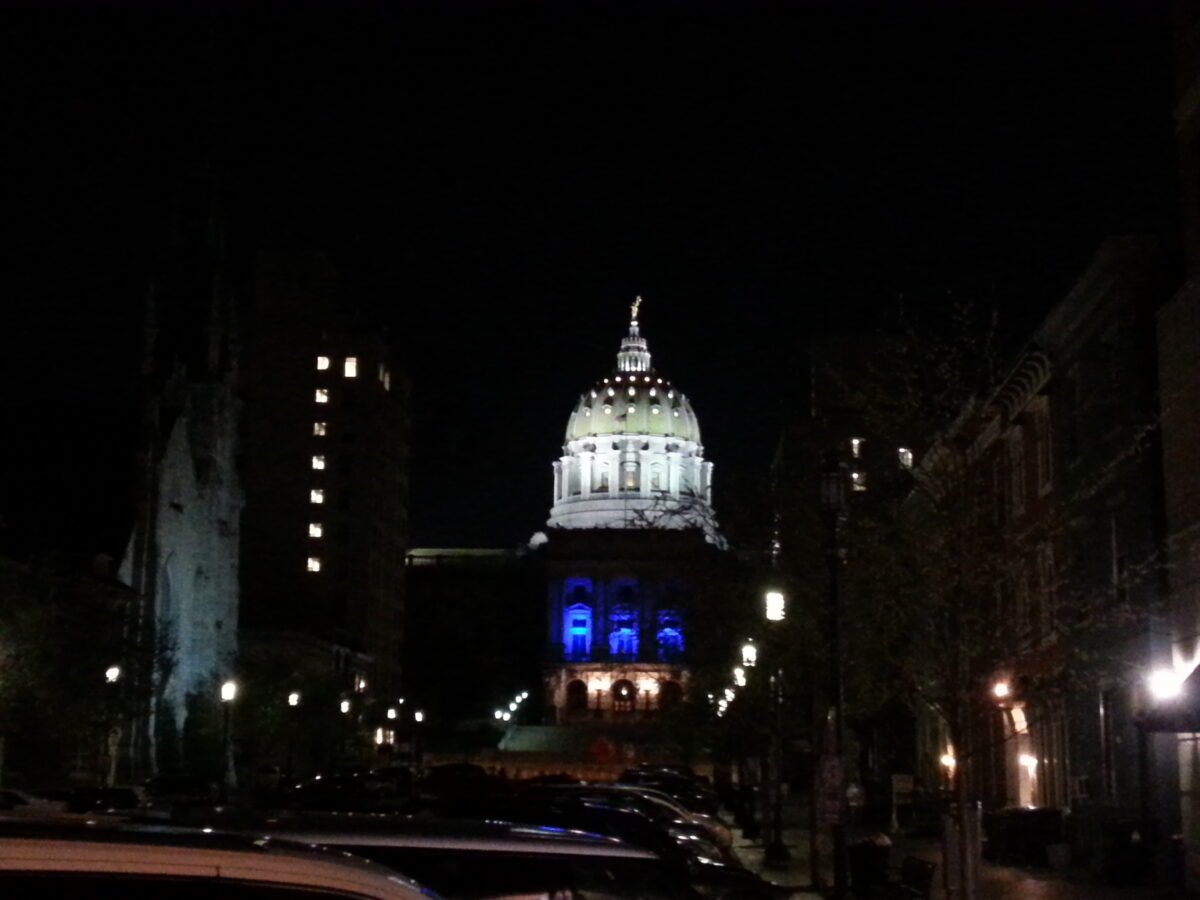 There was a couple having engagement picture taken in front of the building. It was a cute scene.

I walked along Third Street, then to Walnut, and back across the bridge.