The Marvelous Adventure of the Big Dig

At midnight, I went outside. The snow had stopped at last, the sky had cleared, off, and an almost full moon was high overhead. It was peaceful. There was almost no sound. No cars moving on the roads in the distance.

As the snow fell last night, piling up against a lamppost near my apartment, I couldn’t help but think of Narnia and the lamppost where Lucy met Mr. Tumnus. (Pictures from Snowzilla are here).

I kept thinking of the magical opening to Lance Parkin’s Doctor Who novel, Father Time, and what it had to say about winter:

There comes a time when the fall of snow is no longer the start of a marvelous adventure. There comes a time when it means scraping your windscreen and hoping your car starts. It means aching joints and throbbing sinuses and cold hands and feet. It means taking longer to get to work and spending all day sitting in an office where the heating isn’t on. Grey slush and cracked pipes, cancelled trains and influenza, that’s what snow means. You’ll wake up feeling like that, one day, and it will mean you are grown up. I hope that day doesn’t come soon.

My Beetle was one of those misshapen lumps. Cleaning it would not be a marvelous adventure. 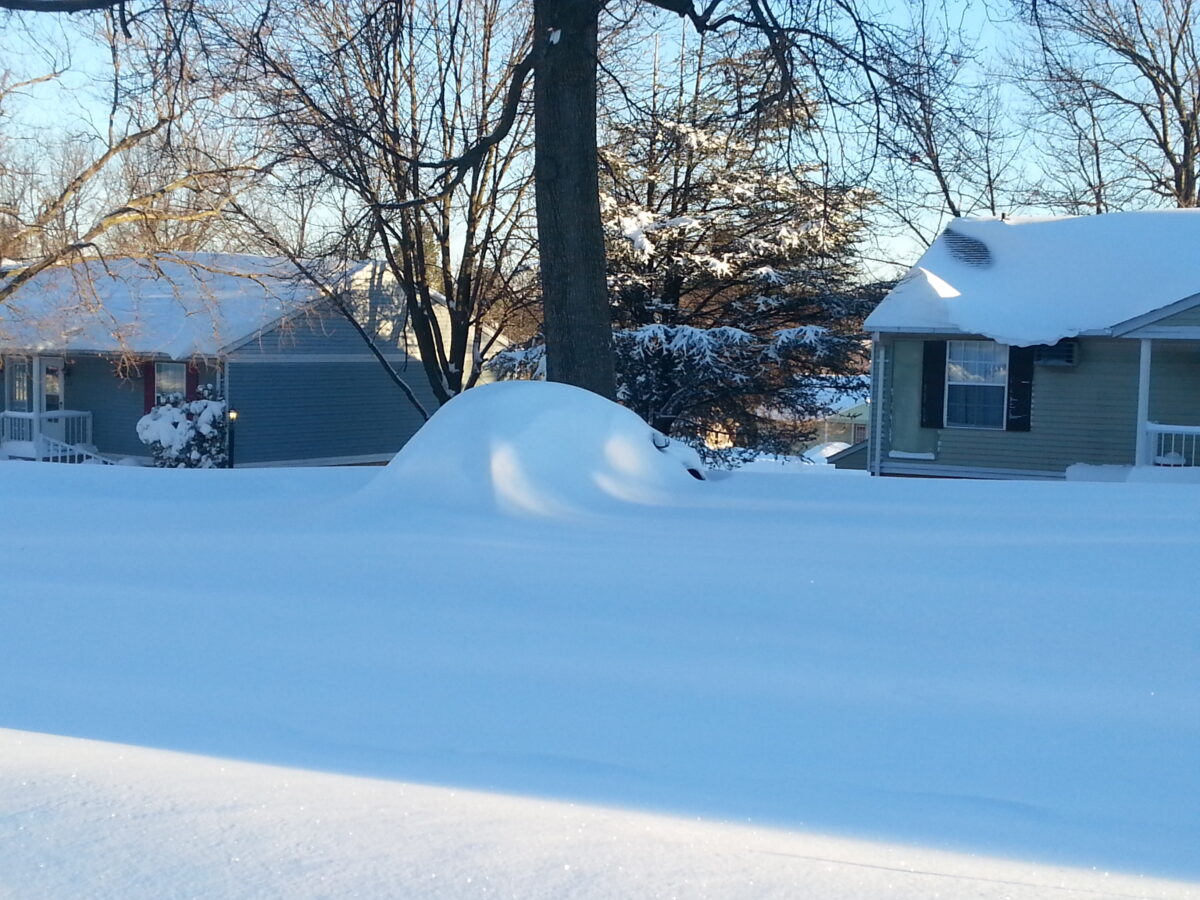 I put on a pot of coffee, listened to the first hour of NPR’s Weekend Edition Sunday, bundled for the weather — two layers of pants, two layers of socks, two t-shirts, a ski jacket — then set out across the parking lot to free the Beetle from the clutches of the White Witch’s Frost Giants.

It took all of forty-five minutes to free the Beetle. Reaching it was more a chore than anything; the parking lot had been plowed before dawn on Saturday, so I had to cross a mountain of snow that was over four feet tall. Then I cleard myself a hole to work from my the front passenger side of the Beetle, then set to work, methodically clearing the snow away. I thought about doing half, taking a break, then doing the rest, but it wasn’t as cold as I thought it would be, and the snow, though heavy and deep, cleared easier than I expected as it wasn’t especially wet.

I trudged back to my apartment, stripped down and threw on shorts and a t-shirt, and sat down to drink hot chocolate and listen to Garrison Keillor.

Then I went out and dug a path across the parking lot, from the stairs in front of my apartment (which my next door neighbor cleared yesterday) across to the Beetle.

That done, I set to work clearing the sidewalk that runs crosswise in front of my apartment. What I wanted to do was to clear a path to the path and steps that lead to behind my building as I wanted to take a look at the snow piled up against my bedroom and office windows.

That path cleared, I hopped around back to take a look.

I’m not especially worried about this — I have the storm windows closed — but it’s not great.

I then helped one of my neighbors clear her car. She said she’d been at it for the better part of an hour, so helping her finish the job was the least I could do.

The parking lot is impassable. It hasn’t been plowed since before dawn yesterday, and most everyone has been piling up their snow in the parking lot.

Clearly, I need the Rocketeer’s jetpack to get to work tomorrow. Or Tuesday.

I’m tired, I’m sore, and muscles I didn’t even know I had are screaming agonies.

This wasn’t any sort of marvelous adventure. And I fear it may be repeated later in the week; some early models are showing another storm arriving late Thursday into Friday.

Thankfully, there are new episodes of Downton Abbey and Mercy Street tonight. 🙂