The Problem of Susan

A few weeks ago, Dark Horse Comics published an adaptation by P. Craig Russell of Neil Gaiman’s Narnia short story, “The Problem of Susan.” While I’ve read Gaiman’s short story a half dozen times over the years, between work and life and the flu I didn’t have the opportunity to give the graphic novel a read. 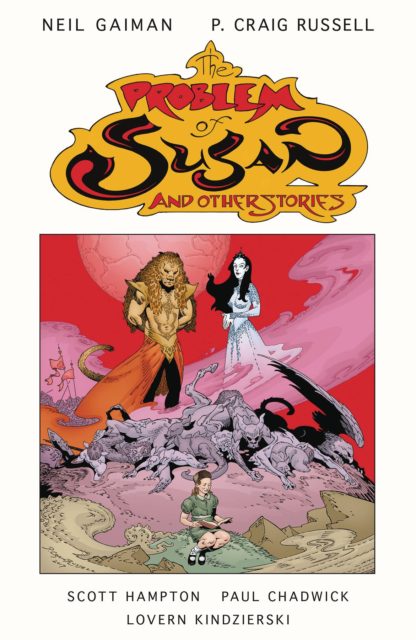 Unlike C.S. Lewis’ Narnia stories, Gaiman’s “The Problem of Susan” is not a story for children. It begins with a dream of the battle from the climax to The Lion, the Witch, and the Wardrobe, Susan fixates on the flaccid penis of a dead centaur on the battlefield, and why are Aslan and the White Witch speaking in hushed tones on a distant hill…? In our world, an elderly woman, a retired professor, prepares for an interview with a young journalist about how latest book, a study of children’s literature. That interview veers into a discussion of Lewis’ Narnia stories, in particular Susan’s exclusion from Heaven in The Last Battle because she was too fond of nylons and lipstick, and as they discuss whether Aslan is a just god or a capricious one it slowly dawns on the interviewer (and the reader) exactly who the elderly professor really is.

Russell’s art adds texture to Gaiman’s story that wasn’t there originally (some nice parallelism between a mouse at the beginning and Susan at the end), but I think I preferred the way Gaiman’s text left Peter and Edmund’s fate more cryptic; in illustrating it, Russell removed the reader’s imagination. On the other hand, illustrating the sex scene (which is no more graphic than anything out of Russell’s gorgeous Ring of the Nibelung adaptation) made it more disturbing than Gaiman’s prose.

I still have no idea about the Mary Poppins scene.

I have liked the story since I read it in 2005, even if, as mentioned, I haven’t worked it all out in my head. (I’ve been asked if it was an influence on “Make-Believe,” and it wasn’t; I didn’t read “The Problem of Susan” until a few weeks after I’d turned in the manuscript. Gaiman’s “One Life, Furnished in Early Moorcock,” however, was an influence.) I like Russell’s adaptation; it is every bit as beautiful as I hoped a P. Craig Russell Narnia graphic novel would be. It’s interesting to see another writer and, now, another artist, tackle C.S. Lewis’ world.

This graphic novel isn’t for every Narnia fan. It’s darker and far more adult and very much not something C.S. Lewis would have ever written, but it has always struck me as a valid continuation of Narnia, one that takes Narnia seriously and grapples, in some small way, with one aspect of Lewis’ story.