A few nights ago I realized how much I missed baseball. The tree outside my apartment is nearly shorn of leaves, temperatures fell below freezing a few nights ago, and I’m missing baseball. Reading Safe at Home recently helped to keep the feelings at bay, so on Saturday, I went to Project Gutenberg and found myself a baseball book to read.

My choice? Lester Chadwick’s The Rival Pitchers: A Tale of College Baseball, published by the Cupples & Leon Company back in 1910.

Chadwick, Wikipedia tells me, was a pen name for Howard Garis, a writer for the Stratemeyer Syndicate, the company behind the Hardy Boys, Nancy Drew, the Bobbsey Twins, and other novels for children in the early part of the 20th-century. Garis/Chadwick wrote a number of novels for the Syndicate; for my purposes, he wrote a “College Sports” series, of which The Rival Pitchers was the first, and the Baseball Joe series.

The Rival Pitchers and the other five books in the “College Sports” series take place at Randall College, an all-mens college somewhere in the midwest near the shores of Lake Michigan. (Though the novel doesn’t give many clues as to the location, I suspected it was probably in Wisconsin. There’s farm country to the north, a railroad, and a river that’s usable by the college’s crew team.) Our protagonist for this book is Tom Parsons. A freshman at Randall, he comes from a farm in a nearby town where he was the pitcher for his town’s baseball team. However, Randall’s baseball team has a pitcher — Fred Langridge — a freshman and the manager of the team thanks, in no little part, to the money he inherited from his deceased parents.

Will Tom join the baseball team and succeed on the diamond and in his classes? When Langridge feels his position on the team is threatened, will Tom escape Langridge’s machinations? And will Randall win the Tonoka Lake League pennant for the first time in living memory? 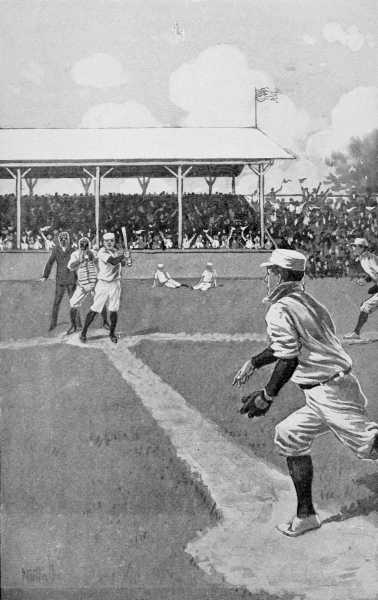 I’m not going to mince words here. The Rival Pitchers is a terrible book. It’s terrible from a 2014 standpoint. And I imagine it was terrible in 1910, when a ten-year-old Ernest Hemingway could have read this.

Baseball is a small part of the book, and I will come back to The Rival Pitchers‘ baseball in time. Most of the book concerns itself with the rivalry between the freshman and sophomore classes at Randall. There are brawls. There are pranks. There is hazing. There is an electrocution that nearly kills two sophomores. There’s petty theft. There’s destruction of property. There’s kidnapping.

Then there’s a romantic triangle between Langridge and Tom for the love of Madge Tyler. Madge was a childhood friend of Tom’s, and I suppose (because the novel wasn’t clear on this) she must have moved to the town where Randall College is located where, somehow, at some point before the novel begins, she met Fred Langridge. Suffice it to say, not only are Tom and Langridge rivals to be Randall’s star pitcher, but they’re rivals for the fair Miss Tyler’s heart.

Schoolwork? Well, it happens, but by and large it happens off-page. One of the problems I had with The Rival Pitchers is that the novel’s internal chronology makes no sense whatsoever. Tom is a newly-arrived freshman a few days after Easter, whereupon a new semester begins and it seems to run until, roughly, July. It has to take that much time; there’s the time that happens between games; the Randall team only appears to play once a week, there are weeks at the beginning of the semester for the organization of the team and practices, and Tom gets suspended from the team twice, each time for two weeks. So I can’t quite figure out how Randall College is constituted that its freshmen arrive at Easter and the semester is set up such that the baseball season fits neatly into that semester. To be honest, there’s nothing about Randall College in The Rival Pitchers that feels like any college, real or fiction, of which I’m aware. As a setting, it’s wholly unrealistic.

For that matter, so is the baseball.

Some things I can accept, given the nature of the times. It’s entirely possible that Langridge, who is stated on occasion to be the worst hitter on the Randall team, would be the lead-off batter; on-base percentage and line-up optimization, those weren’t things in 1910. We’ve lost some of the baseball language that Garis uses, like “twirler” instead of pitcher.

By and large, though, the game played in The Rival Pitchers doesn’t feel authentic. Chadwick/Garis doesn’t spend a lot of time on the baseball action, but when he does we either see a Randall player making some cataclysmic error on the field (at least two or three times a game, it seems) or Tom or Langridge pitching. (And, curiously, Tom seems to capable of only throwing a curveball.) Perhaps teams flipped coins to determine who batted last back in those days, though I have doubts. I especially have doubts that the players on the Randall team would be utterly unaware that they’re in striking distance of the Tonoka Lake League pennant with just two league games to go. The book says that “Mr. Chadwick has played on the diamond and on the gridiron himself,” but I have a difficult time believing that.

It’s also difficult to take Langridge seriously as a villain when he’s comically self-destructive. By today’s standards, he’s not a terrible sort — he drinks, smokes, plays cards, and gambles. In other words, he’s a college student. But. He drinks between innings of the baseball games, ruining Randall’s chances of winning each game. He pitches drunk. He nearly kills people when his pranks go awry, and he gets Tom in trouble time and again. He also treats Miss Tyler appallingly, usually because of his drunkenness. For the standards of the time, Langridge’s behavior would have marked him out as a bad sort, someone you wouldn’t want to imitate or associate with. To the reader today, myself specifically, Langridge is a caricature with a half-dozen self-destructive traits rather than a character proper. Why did Langridge behave the way he did, other than to be an arbitrary villain? The Rival Pitchers doesn’t even explore the issue.

The book is also appallingly racist. There’s a phrase that’s said a number of times, whenever a character has done something nice for another — “That’s white of you.” The first time I hit that, I boggled. I know, the times it was written and all that, but that didn’t make it any less appalling. And then there was this passage:

The following Saturday the team went to the Indian school at Carlisle and played a game with the red men. It was a hard-fought battle and the aborigines made the mistake of putting in a lot of substitutes for the first few innings, for they had a poor opinion of Randall. But the visitors rolled up a good score and Tom was a whirlwind at pitching, holding the red men down to a low score. Then the Indians awakened and sent in some of their best players, but the Randalls had the game “in the refrigerator,” as Holly Cross said, and took it home with them, despite the war cries of the redskins and their efforts to annex the scalp-locks of the palefaces.

Holy shitballs, Batman! That’s offensive! I don’t know what’s worse, the language used to describe the Native Americans or the text’s attitude toward their intelligence and civilization. There’s nothing about this passage that’s necessary. It’s not even necessary that the opposing team was from “the Indian school”; they could have come from another school or been a semi-pro team from a nearby town (since the Randall squad had, to that point, played several semi-pro teams). This passage exists to take a swipe at people and for no other purpose. It’s not okay now. It wasn’t okay then.

The Rival Pitchers is a terrible book. It’s terrible by today’s standards, and I can’t imagine how it was acceptible by the standards of the time. The characters are thin, the plot is aimless, the conflict is senseless, the prose is turgid, and the baseball content is so thin as to be useless. It’s not even worth a laugh. It’s plain terrible.

And I think I’ll skip the Baseball Joe series.