The Ultimate Cheese and Onions Sandwich

I may have created the ultimate cheese & onions sandwich!

Back in the spring, for nerdy reasons, I began experimenting with the British-style cheese and onions sandwich. There’s a Rutles song about the sandwich, and in my mind I imagined that a cheese and onions was some amazing thing, completely unknown to American shores.

In reality, it was similar to something I was quite familiar with, the pimento cheese sandwich.

A pimento cheese sandwich has a spread that’s cheese, pimentoes, and mayo, blended together. Cheese and onions utlizes onions instead of pimentoes.

(Don’t read any disappointment, veiled or not, into that. I grew up eating pimento cheese sandwiches and like them a lot.)

But the cheese and onions sandwich an interesting platform on which to build.

There are all sorts of cheeses one can try. (I can hear Pinky singing “Cheeses of the World” in the back of my mind as I type this.) And there are binding agents one can substitute for the mayo for healthier options.

One of the best mixtures I’ve found is smoked cheddar, diced onions, and vanilla non-fat Greek yogurt. The sweetness of the yogurt is a good counterpoint to the cheddar in the spread and the mustard I spread on the bread as well.

Then I might add some sliced ham and even tomato slices. And that works.

The problem is, I don’t remember where I bought the smoked cheddar from — I’ve tried all the grocery stores I shop — which led me to try something completely different. 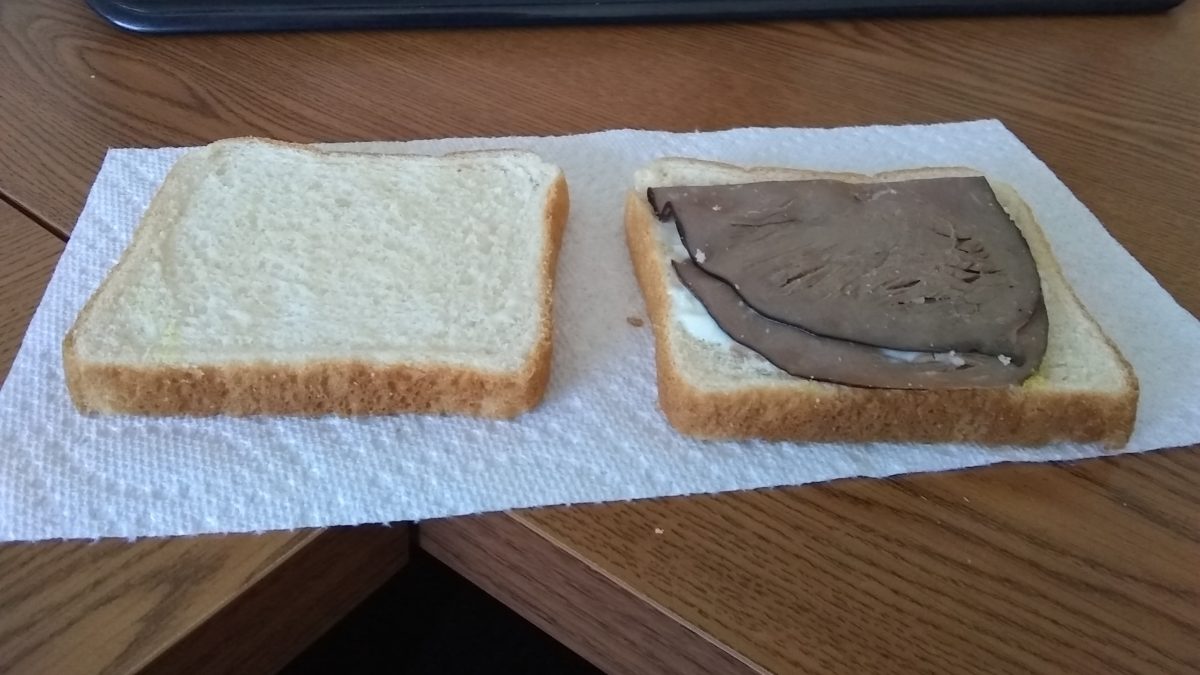 And what else goes well with roast beef? That NPR Thanksgiving favorite, Mama Stamberg’s Cranberry Relish, which I tried for the first time (and made a lot of, which I still have in my freezer) back in November.

Cheese and onions spread, made with horseradish cheddar.

A slide of roast beef.

Plus, mustard slathered on the bread.

So, you have all of these things going — roast beef, cheese, onions, horseradish, mustard, cranberries.

Unfortunately, I couldn’t pack this lunch at home and take it to work; the cranberry relish would make the bread soggy long before I was ready for lunch. Instead, I made the sandwiches I took to work sans relish, put some of the relish in a container, and added the relish to the sandwiches when I was ready for lunch several hours into my work day. 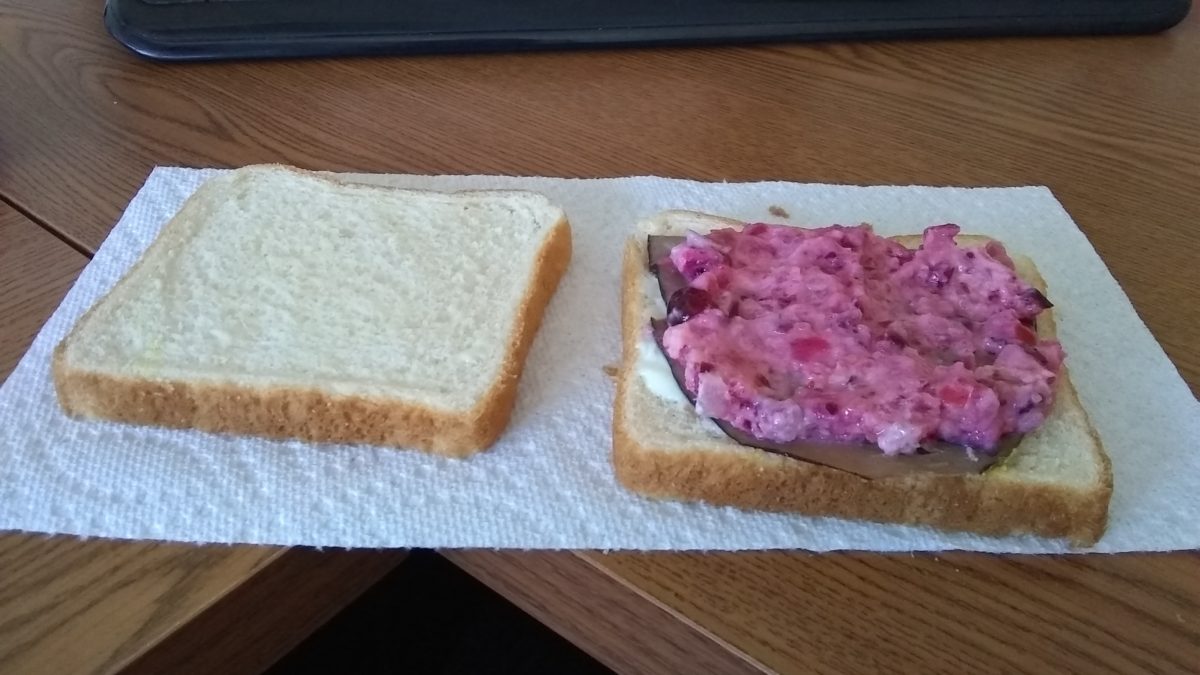 It was still a little goopy, but it worked. It worked quite well. Actually, it was downright awesome. It might be pretty far afield of what a British-style cheese & onions sandwich is, but I can’t deny that it tasted great and hit the spot. 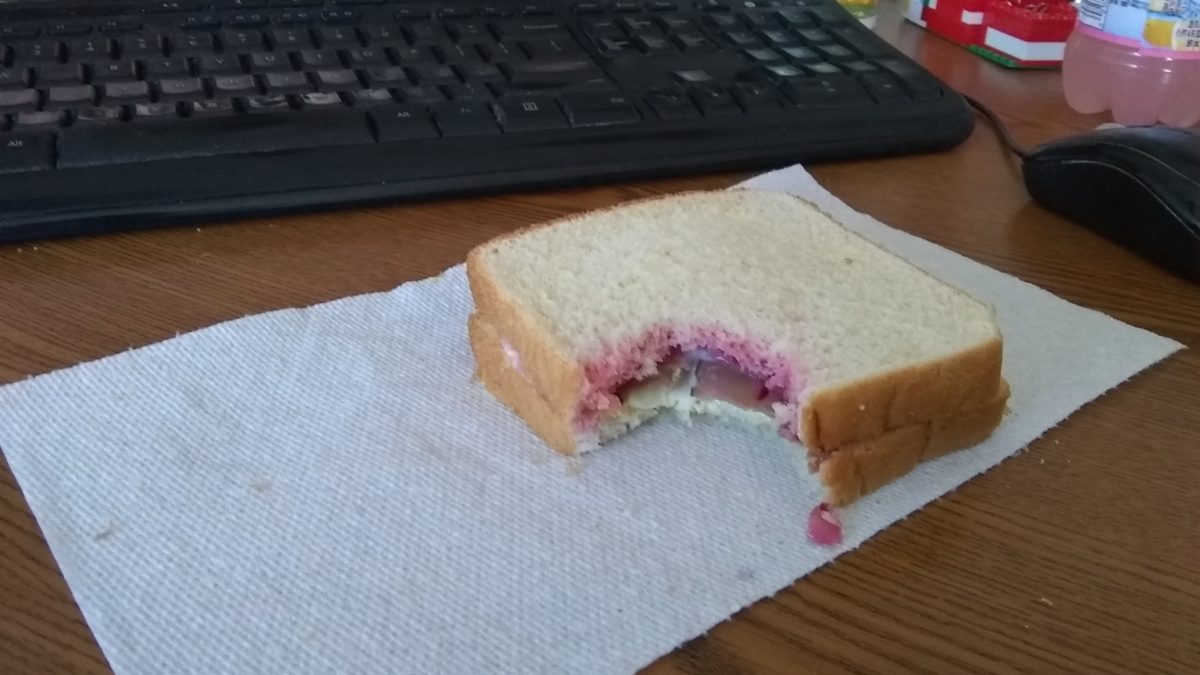