Things I’ve Been Watching: The Oranges

There’s a reason why a movie is on the DVD rack at Big Lots for three dollars. There’s a high probability that it’s not very good.

The movie in question was The Oranges, a 2011 film starring Hugh Laurie, Oliver Platt, Allison Janney, and Leighton Meester. Laurie and his wife (Catherine Keener) live across the street from their best friends, Platt and Janney. Each family has a daughter of roughly the same age (early 20s). Laurie’s daughter (Alia Shawkat) lives at home after college; she has big plans of leaving West Orange, New Jersey, for Manhattan and a design firm, but she’s been working on her portfolio for years and now works in a furniture store. Platt’s daughter (Meester) was a rebellious free spirit (and once the best friend of Laurie’s daughter); rather than do college, she took off for parts unknown and, eventually, found herself engaged to a boy in San Francisco. It’s been five years since the free-spirit has been home, and it doesn’t look like she’s coming home this Thanksgiving. Until, suddenly, she shows up in West Orange, no longer engaged, and with no plan for the future. And the arrival of this force of chaos turns the settled life of two families upside down when she and Laurie, close to thirty years her senior, embark on an affair. 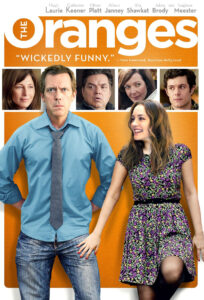 Have you ever read a book or watched a movie or television show where you could “see” what the creator(s) were going for, only they didn’t quite get there? The elements are there, the pieces are moving, and it doesn’t add up? That’s The Oranges.

Take the summary I gave. Did I describe a comedy or a drama? The film is both, and I’m not sure if that’s a deliberate choice or if the filmmakers’ couldn’t decide. It’s the inability of the film to decide that makes it difficult to take. Its scenes are fine individually, their implications suggest interesting stories, but the cumulative effect, ultimately, is underwhelming.

The central problem, in my view, is that the film can’t decide where to put its character focus. It tries to treat every character as equally important, which means that in a 90 minute film with seven major characters no one gets developed much beyond the superficial. For instance, the film doesn’t lay the groundwork for Laurie’s affair with his neighbors’ daughter. If his marriage is damaged, do something to make it clear. If he’s having a mid-life crisis and needs to find his spark again, give some indication of it. If he’s so sure that this isn’t a mistake (especially when they get caught a very early point where they hadn’t done anything except make out in a car) that will upset his life and everyone else’s, give a reason to believe it.

The performances were mixed. Laurie seemed rather laconic, and he had little chemistry with Meester. Janney was the most lively actor in the ensemble; her reaction to the discovery of the affair was priceless.

There’s not a lot of ambition to The Oranges; it’s basically a television movie, but with pot smoking and f-bombs. (That’s what earns the film its R-rating. Otherwise, for a film about Hugh Laurie’s affair with his daughter’s former best friend, the film is completely chaste.) The film meanders as it approaches the third act, and the finale doesn’t have a lot of life to it.

I got what (I think) the film was going for, even if it doesn’t get there.

I won’t say this was a waste of my three dollars, but The Oranges is a curiosity at best.