Friday afternoon I asked people, several times over, what they thought of Van Helsing as they left the theatre. “Better than Hellboy!” some said. “Better than LXG!” others said. I loved Hellboy, enjoyed LXG for the most part. It seemed, then, that my fears that Van Helsing would reveal itself as a disaster were unfounded.

Then I saw the film.

I can only imagine there’s a new usage of the word “better,” in the way that “bad” sometimes means “good.” Only in this case, “better than -blank-” means “makes -blank- look like Citizen Kane by way of comparison.”

Yes, Van Helsing is that bad. 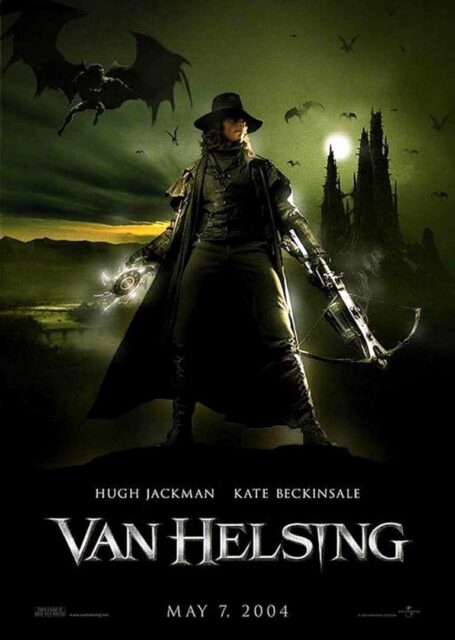 To put it mildly, Van Helsing is a fucking piece of dog shit.

I had hope. The first thirty-odd seconds held so much promise. Black and white! Hordes of rampaging villagers bearing torches! The establishing shot of a remote and forbidding castle! A mad scientist screaming, “It’s alive! It’s alive!”

And then Dracula makes his first appearance.

Richard Roxburgh, Moriarty in League of Extraordinary Gentlemen, shows that his performance in LXG and the BBC’s Hound of the Baskervilles was no fluke–the man simply cannot convincingly portray the great literary icons of the Victorian period. He was an atrocious Sherlock Holmes. His Moriarty was a disaster. His Dracula makes Leslie Neilsen’s look like the model of restraint. In comparison to the intensity Hugh Jackman brings to the role of Van Helsing, Roxburgh seems to have wandered in from a nearby set where a light, romantic comedy was being filmed. He simply doesn’t fit, lacks gravitas, and cannot deliver the goods as the villain of the piece. From the moment Roxburgh wandered into the frame, the film’s energy died.

As for Jackman, I mentioned his intensity. That’s all his role is. Character development? Nil. An explanation of from whence Van Helsing comes? Not this time around. This isn’t Bram Stoker’s Abraham Van Helsing, that’s for sure. (I should mention that, had the film not opened with a date and Mister Hyde, I’d have said this was a prequel to Bram Stoker’s novel, perhaps about his Van Helsing’s grandfather. Erm, nope.) Van Helsing is a character without a past, with memories that stretch back to the first century. He’s immortal, how? Why? Is it too much to ask for answers?

There is one thing I can point to as a success–Shuler Hensley as the Frankenstein monster. If the classic Universal monster films did one thing wrong by their source material, it was in turning Mary Shelley’s creation into an inarticulate brute. Hensley captures some of the tortured genius in the creature, and I found his scenes to be particularly creative. It wasn’t overly difficult to imagine this Frankenstein monster playing minor league baseball during the Second World War.

Let’s say nothing of the film’s ending, beyond the obvious. One, it made no sense whatsoever in any version of vampire lore I’ve heard. Two, why the Return of the Jedi homage (or, worse, The Phantom Menace)? It was pretty stupid then, it’s pretty stupid now. At least then you expected to see wispy dead people.

Van Helsing wasn’t a bad concept–put the classic monsters together and have someone hunt them down. Jackman wasn’t a bad choice for the role. It’s the lapses in story logic that sabotaged the affair, combined with the director’s penchant for loud, abrasive set pieces. If the film is successful, we might see a sequel. Van Helsing and the Parisian Opera Ghost wouldn’t be a bad choice. Even the animated Van Helsing movie, showing Van Helsing’s first encounter with Mister Hyde, had more focus than this live-action mess. There’s a lesson to be learned here, and I hope Universal hears its call.