You Have Been on Mars, I Perceive

A series of bright flashes on the planet Mars catch the attention of Sherlock Holmes, the world’s great consulting detective, and with Dr. Watson at his side, Holmes attempts to alert the authorities that an invasion by the Red Planet is imminent. His warnings go unheeded, and when cylinders fall on Horsell Common and Martian war machines emerge, the War of the Worlds has begun. 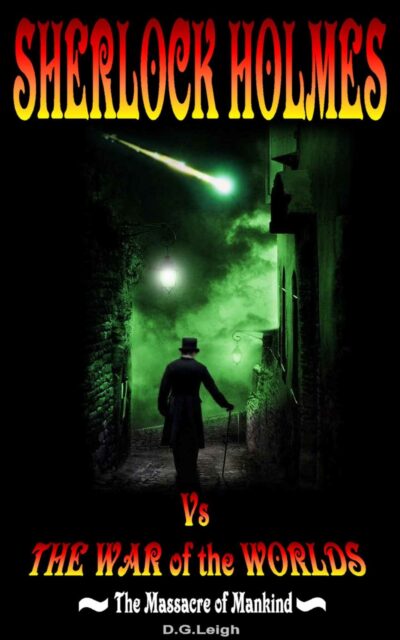 D.G. Leigh’s The Massacre of Mankind: Sherlock Holmes vs. The War of the Worlds imagines what Holmes and Watson were up to during the events of H.G. Wells’ novel, The War of the Worlds. Unfortunately, Sir Arthur Conan Doyle’s characters weren’t up to anything interesting.

First, the book is pointless. Instead of recounting the events of the War of the Worlds through the eyes of Wells’ unnamed narrator, Leigh tells them through Watson’s eyes. And Holmes and Watson are as powerless to do anything to save Earth from the Martians as Wells’ narrator. Holmes and Watson go to similar places as the Narrator, they have similar experiences, they witness similar things. Instead of a deranged curate, Holmes and Watson encounter a deranged farmer. Instead of the artilleryman and his theories about restarting civilization, there’s a government functionary who fills the role. Except for providing a “secret origin of Moriarty” — I suppose we can’t have a Sherlock Holmes pastiche without the Napoleon of Crime — adds nothing to your understanding of The War of the Worlds.

Second, the story is a waste of Sherlock Holmes. Nothing about this story requires Sherlock Holmes because the story The Massacre of Manking is telling isn’t a Sherlock Holmes story. There’s no mystery here, no deduction. What little characterization of Holmes we have in the book is inexplicable; the Holmes that Watson writes about in A Study in Scarlet — “Knowledge of astronomy, nil” — wouldn’t take an interest in flashes of light on Mars before even the noted astronomer Ogilvy and become worked up into a panic that Martians are invading the Earth.

Third, the writing is poor. Sherlock Holmes fans know that Watson has a distinctive prose style. Leigh’s Watson writes in staccato sentences that are closer to headlines, often missing either subjects or verbs, than to actual prose. Here’s a great example: “The town of Woking in the midst of being evacuated. The rail station besieged, thought still claim and civil, with people carrying all manner of unnecessary belongs. The army had set their cannon battery on the hill north of the town. If the Martians had come for a fight they’d find one away from the civilian population. The decorated officer in charge confident he’d pummel the enemy into submission with the initial volley.” Not only is the text riddled with typos (see “claim” or “unnecessary belongs” in the second sentence there), but it doesn’t read at all like Watson’s polished prose. It’s nothing but words vomited on the page, and it’s painful to read.