A few years ago, I wrote about Disney’s adaptation of The Sword in the Stone, a film I loved as a child and wasn’t quite as enchanted by as an adult. The new BBC adaptation, written by Brian Sibley, interested me as soon as I heard about it, from the casting (David Warner as Merlyn) to the ambition of adapting all five books (including The Book of Merlyn) in six hours.

I’ve listened to the first episode, “The Coming of Merlyn,” twice now, and I have to say that this a keeper. 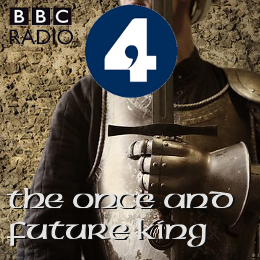 The adaptation begins, as The Book of Merlyn does, on the night before the battle of Camlann. Arthur, aged and tired, knows that the morning will bring a battle with his bastard son Mordred that he cannot avoid, a battle that will destroy his kingdom and everything he has spent his life trying to build. His kingship is already failing; his wife Guenever is imprisoned in the Tower of London, while his foremost knight Lancelot is in France. Wishing for a way to avoid what he knows will come, he wishes for one last visit Merlyn, who has been trapped for years by sorcery. To his surprise, Merlyn arrives, and together they reminisce about the lessons that Merlyn has tried to impart to Arthur over the years. Together, they go over their first meeting, and then two adventures when Arthur was the child Wart, with no conception of his destiny, when Merlyn turned him first into an ant to experience conformity and unthinking warfare and then into an owl so he could experience the transcendent beauty of flight. Then they talk of Arthur, now a king, and his wooing of Guenever. And, as the episode closes, a messenger arrives to inform Arthur that London is besieged by Mordred’s forces.

The first episode has impressive production values. Warner’s Merlyn is both weary and wise, and some of his dialogue reminds me greatly of the Doctor in Doctor Who. (Were I feeling especially fannish, I might say this is an adventure of the Unbound third Doctor some years after “Masters of War.” But I’m not feeling that fannish.) Paul Ready plays Arthur as a young man in flashback and as an aged king in the main body of the episode, and he conveys different moods in both performances; the young Arthur is hesitant and unsure of himself, the old Arthur has seen much, experienced much, knows an ending is at hand and wishes that it weren’t. Bruce Alexander’s performance of Archimedes seems to be inspired by the Disney film, and Lyndsey Marshal’s Guenever makes an impression in a brief role in this first episode. Beyond that, the sound design is fantastic, and the effect is immersive and evocative.

Sibley’s script is solid, and I had forgotten how profound T.H. White’s story was. There’s a scene midway through where Wart (the young Arthur) has been transformed into a goose, and he takes flight with a Siberian goose. Together, they witness the sunrise, and Wart learns a leson in how silly and petty human concerns are. There’s a wonderful speech by a goose at sunrise that is quite moving.

“The Coming of Merlyn” was simply magnificent, and it was everything I wanted from it. If you’ve any interest in the Arthurian legend, radio drama, or good stories well told, check out the first episode of The Once and Future King and give the series a try.

One thought on “The Once and Future King: The Coming of Merlyn”