Last night after work, I went to see Star Trek Beyond.

It was a really strange experience. The theater wasn’t exactly the best (it smelled moldy and musty, and the air conditioning was off-kilter to the point where it wasn’t comfortable), and as I watched the movie I didn’t get as immersed in it as I wanted to be. I think the gushing praise I’ve seen of it on social media (Facebook, Twitter) raised my expectations a bit too high, so the film didn’t quite get there for me.

Don’t misunderstand, I enjoyed the film and think it’s in the upper echelon of Star Trek films. It was thoughtful, it had its action setpieces, I liked the characters and their interactions, it was funny in genuine ways in ways that Star Trek films haven’t been, well, ever. Starbase Yorktown is a fascinating environment; a Death Star built for good is how I described it on a Facebook post, and it’s a place I wouldn’t mind a future Star Trek production revisiting. It was trying to be a Star Trek story in an unambitious way — it didn’t feel the need to be an epic hero’s journey — and I was surprised at how completely unlike the previous twelve films it felt like. The poster, with its large Chris Pine and its small Zach Quinto, should have clued me in; the balancing of the characters in this film was unlike anything in the original series films (where Kirk and Spock were co-equals) or the Next Generation films (where Picard and Data were co-leads, and everyone else in the ensemble was a replaceable non-entity), or even the two J.J. Abrams films. Everyone does stuff here in Beyond, but it’s mixed and matched in different ways that had more in common with the way the television series back in the day handled its character dynamics.

And that’s the start of where my expectations fell short. I found I couldn’t really turn my writer-brain off and enjoy the film for itself. I kept taking it apart in my mind, and that put me at a distance from the experience of the film. 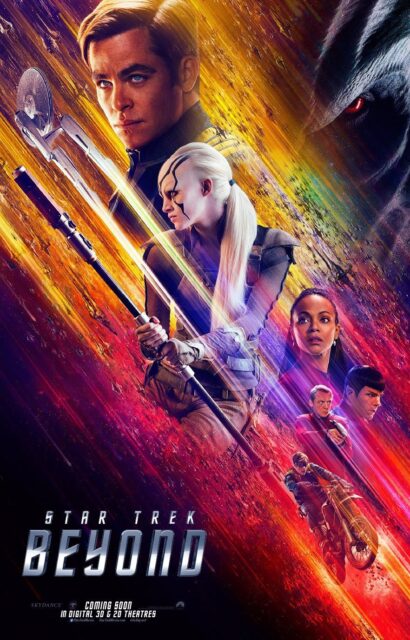 The script for Beyond was, after the labyrinthine script for Into Darkness, blissfully straightforward. It wasn’t trying to tell a complex story; out on the frontier, the Enterprise responds to a distress call, discovers a mysterious planet, and things go very wrong. The characters behaved the way I know this crew should behave. The personal crises of Kirk and Spock worked and felt genuine. But it was also a very mechanical script. I kept seeing Chekhov’s guns on the mantelpiece; when they fired and moved the story forward I wasn’t surprised, and I could “feel” the act rollovers in its three-act structure like we were driving over speed bumps. (For the record, I’d mark them at Kirk abandoning the Enterprise, and the launch of the Franklin.)

I was also consciously aware that I was watching actors, in particular Quinto and Anton Yelchin. Quinto, because there were times where he didn’t really look like Spock; there was something weird about his hair, or maybe his face wasn’t properly gaunt at times. And Yelchin, because I was too often conscious that he’d just died in a strange car accident.

Midway through the film I wondered if Simon Pegg had read David Mack’s Destiny trilogy. There were some similarities, from the direct (a lost 22nd-century pre-Federation Earth starship that has an influence on the story’s present) to the more superficial (the crew of the lost starship becoming something other than human in their struggle to survive their fate). I’d been spoiled, thanks to advertising, on the fact that there was a twist on Idris Elba’s character, but not the details or the nature of it.

Then I was curious what this story looked like in the original Star Trek timeline. Which Federation starship found the Franklin and its doomed crew? Did Starbase Yorktown exist? Then I thought it might not; Yorktown seems far more advanced than anything the Federation had in Picard’s era.

I liked it. I felt that Beyond captured the “Horatio Hornblower in space” nature of Star Trek better than anything since Star Trek II. It also featured a sharply drawn take on Kirk as an introspective man with a deep curiosity who cares deeply for his crew and will go to the mat for them, and I felt that Chris Pine embodied Kirk better here than in the previous two films.

I probably won’t go see it again; I’m content to wait for the home video release. It’s very well made, and it’s the most traditionally Star Trek movie we’ve had in a long, long time.