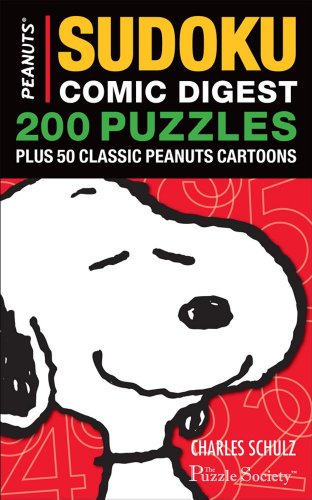 I like Sudoku puzzles. I love Charles Schulz’s Peanuts.

And, curiously, there is a book that combines them both — the Peanuts Sudoku Comic Digest.

I say “curiously,” because there’s nothing intrinsic in Peanuts that lends itself to Sudoku. Schulz had passed away before the Sudoku craze became a craze, and there are no Peanuts strips of Charlie Brown puzzling out the numbers to impress the Little Red-Haired Girl.

Still! I managed to pick up the book inexpensively, on the theory that it would make a good challenge on the train during my daily commute, and the book arrived today.

For the Peanuts fan, the book has fifty Peanuts comic strips published between 1993 and 1997. It’s a random smattering of comic strips; none of them have anything to do with Sudoku, none would even inspire someone with a possible Sudoku solving technique. Still, they’re amusing, if you like mid-90s Peanuts as I do.

Digression On
Yes, there are people who don’t like mid-90s Peanuts, who think the comic strip had grown tired and stale, with Schulz recycling his jokes. I disagree. Mid-90s Peanuts brought Rerun to the fore, which altered the role of most of the characters, especially with Charlie Brown becoming a role model to Rerun. Yes, the book prints several strips with Rerun, and he gets great lines like this one: “I love the rules. Once you know the rules, you can cheat. What I always say is you can’t really cheat unless you know the rules.” Or when Rerun wants to hear about Anna Karenina throwing herself beneath the train, rather than going crazy if his teacher “reads to us again about Dick and Jane.” That Rerun, he’s so completely mental. 🙂 No, mid-90s Peanuts isn’t the classic period (for that, look for BOOM! Studios’ Happiness is a Warm Beagle, Charlie Brown!, which really does look like something out of the early 1960s), but it was an enjoyable period.
Digression Off.

And, of course, the book has 200 Sudoku puzzles, rated on a scale of Linus to Charlie Brown. (Linus is the easiest, then Marcie, Snoopy is medium, then Lucy, and finally Charlie Brown is the hardest.)

I haven’t tried any of them yet. That can wait for Monday morning.

3 thoughts on “On Peanuts and Sudoku Puzzles”