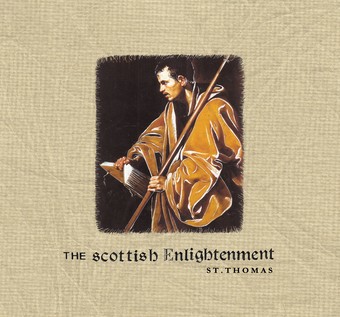 A year and a half ago, I began listening to the BBC’s Scotland Introducing Podcast, a fifteen minute survey of the latest and greatest from some of Scotland’s best unsigned bands. Every Friday morning, I look for the link in my RSS reader, and I’ve discovered some very good music this way, bands like Washington Irving, Y’All Is Fantasy Island, and The Seventeenth Century.

In the spring, I want to say around April, Scotland Introducing host Vic Galloway played a song by The Scottish Enlightenment — “All Homemade Things.” It was from the Pascal EP, then either immediately forthcoming or just released, a gentle song, guitars and drums, about the passing away of time. I loved the song immediately, listened to that particular episode of Scotland Introducing a few times, then bought the CD direct from Scotland’s Armellodie Records. The CD, when it arrived, truly was a homemade thing, coming in a little booklet, tied off with a piece of twine to hold it closed. Pascal was a collection of songs that didn’t make the cut for a forthcoming album, and if songs like “All Homemade Things” and “If You Would Just Try a Bit Harder” didn’t “make the cut” I could only imagine the forthcoming album.

I did some research on the band. I was curious where they had come from. The band’s page on Armellodie’s website, and I found some coverage on a music website that “clicked” with me. I decided, on the strength of Pascal and the things that I’d read, that The Scottish Enlightenment would be a band worth following.

In September, The Scottish Enlightenment released another EP, the Little Sleep EP, again songs that didn’t fit on the forthcoming album St. Thomas. Again, I bought the CD from Scotland. Again, it came as a homemade thing, in a booklet tied off with a piece of twine. Again, an album that couldn’t fit a true gem like “St. Germain Is Thick Tonight” must be incredible.

This week, the band’s full-length debut, St. Thomas, arrives. Much like the album’s namesake, St. Thomas is a pensive album, filled with deep thoughts, dark moments, emotional uncertainty, and catharsis. The songwriting is sharp, the musicianship is assured. The Scottish Enlightenment describe themselves as “ecclesiastical rock,” and there’s a touch of the heavenly to St. Thomas; these songs feel as though the music echoes off the soaring limestone arches of an medieval abbey.

St. Thomas‘s subject matter reminds me of Jethro Tull’s Aqualung, but in terms of style I think of The Leisure Society’s The Sleeper. Just as The Sleeper was the album discovery that, in many ways, defined 2009 for me, St. Thomas and The Scottish Enlightment are certain to be my standard for 2010. Standout tracks for me are “Earth Angel/With Sticks in Crypt,” “First Will Be Last,” “The Soft Place,” and the penultimate track “My Bible Is,” an unexpected track which builds to a justly deserved emotional catharsis.

I’ve streamed the album enough times on the Bandcamp page for St. Thomas, and I’ll place an order later this week for the CD. It’s an amazing album, and I cannot wait to own a copy for myself, put the CD in the Beetle’s stereo and be immersed in its cavernous, echoing, haunting music.

Banish the doubts that St. Thomas himself had, sample some of the tracks online for yourself and prepare yourself to be impressed. The Scottish Enlightenment will be a band to watch, of that I have no doubt. :h2g2: