I picked up a Nick Hornby book yesterday. No, not his new novel, Juliet, Naked, but his screenplay for An Education.

In the ’90s, I’d read screenplays every so often. I liked Ian McKellan’s Richard III, and I had Anthony Minghella’s The English Patient screenplay. At the time, I wanted to learn the form, but I discovered that I had no faculty for writing for the screen. My mind doesn’t quite work in that way.

So why An Education? Hornby, honestly. 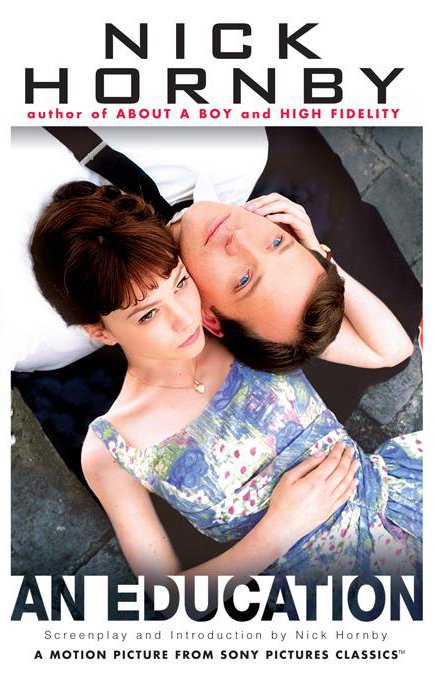 It’s doubtful I’ll see the film in the theater; a perusal of the Sony Pictures website shows that it’s opening in downtown Baltimore in early November, and, honestly, I’d rather blind-buy the DVD than pay the exortion money movie theaters are charging these days. But I am curious about An Education. The trailer looks promising.

The screenplay book is divided into two parts. The first is a lengthy introduction from Hornby that covers his involvment in the film, from when he first read the essay on which the film is based to production meetings to casting to read-throughs and the film’s ending. I’ve always found Hornby a gifted and engaging essayist, and that Hornby is on display here. (There’s also the pretentious wisdom Hornby, but I cannot find him in An Education.) Hornby talks about the casting of Orlando Bloom and its curious denouement, and when I read the screenplay, I cannot see what, precisely, attracted Bloom to the role he had. This section ends with a Sundance diary.

The second part of the book is the screenplay itself, illustrated in places with still photography from the film.

It’s a short read; I got through the screenplay proper in about forty minutes. I couldn’t picture the actors in the roles, even though I had their pictures there, on the page. I couldn’t hear their voices in my head. The people in the screenplay came alive to me as characters in their own right.

I noticed two things in reading the screenplay. The first was the structure; I could feel when the story was going to shift in some way — here’s where the first act ends, here’s where the second act ends, here’s a plot complication, that sort of thing. The other thing I noticed was the tone. If you’ve seen the trailer for An Education, the first half of the trailer has a light and comical tone, while the second half of the trailer seems darker and more serious. The screenplay breaks down that way as well. I laughed aloud at some scenes in the first two-thirds of the screenplay, while the last third was anything but humorous. The tragedy of the story’s ending is laid in the comedy of its beginnings.

I could pull a Hornby and wax philosophic on what this means, how relationships (which is what An Education is about) are comical and lightweight when they begin but then they turn serious and end in tears and ashes when they end. Fortunately, I am not Hornby, so I won’t even attempt cod philosophization. Instead, I will say that I enjoyed reading An Education, and I won’t feel so bad when, a few months from now, I blind-buy the DVD.

I don’t know where An Education will rank in the canon of Hornby film. Below About a Boy, I think. A solid number two. I can’t see a Hornby film dislodging About a Boy from its top-spot.

But it’s above High Fidelity (which I enjoy in parts, but I find deeply flawed) and the Colin Firth Fever Pitch (which I actually like a fair bit, but it feels lightweight). And, anything is going to be better than the other Fever Pitch, which is good on its own terms but really should have been called something else. (I’m picky; I like Fever Pitch, the book, a lot, and it pains me to see it mutilated into something that it’s not.)

One final thought on An Education: The Screenplay — Hornby’s introductory essay is bound to disappoint Doctor Who fans. Not only is there not a single mention of Carey Mulligan’s performance as Sally Sparrow in “Blink,” but Hornby claims to have discovered her. Though I think he’s being facetious on the latter point.