Autumn, 1898. Sherlock Holmes receives a letter from the Burgomeister of Darmstadt, Germany. The town’s gravedigger was brutally murdered and one of his legs was surgically amputated. A little girl was the only witness, and she reported seeing a giant, hulking monster carry away the gravedigger. The Burgomeister’s concern is as much for the reputation of one of his town’s oldest families as it is for his townsfolk’s safety. Soon, Sherlock Holmes and Dr. Watson are on their way to the continent to unravel the mysteries surrounding the murder and the town’s famous family — the Frankensteins. 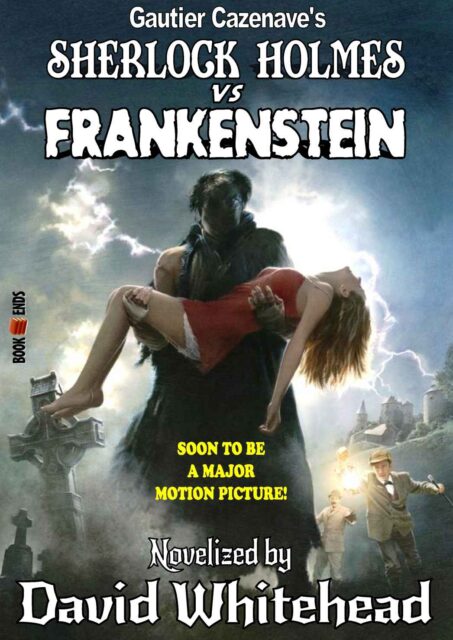 David Whitehead’s Sherlock Holmes Vs. Frankenstein is the novelization of the screenplay that was written for the yet-unmade film (which, at one time, was to reunite Young Sherlock Holmes‘ Nicholas Rowe and Alex Cox as Holmes and Watson).

The story is a quick read, running about 40,000 words. Whitehead doesn’t attempt the Watsonian voice, preferring to tell the story in third person (as there are several scenes that take place outside of Watson’s presence). Holmes’ investigation plunges Watson and himself into deeper danger as they threaten some of the town’s secrets, and Whitehead’s writing conveys an almost Hammer-esque atmosphere. Graveyards are investigated, the theft of medical supplies appears suspicious, townsfolk carry secrets, assassins lurk in the woods, the secret histories of Mary Shelley’s novel Frankenstein and the real Frankenstein family are revealed, and as the novel nears its climax you’ll wonder if the solution to the problems of Darmstadt is mundane or if there is something far more sinister and unnatural at work.

The only thing I felt the novel missed was a final chapter in which Holmes, sitting down in a comfortable chair and smoking his pipe, explains to Watson (and the reader) how he pieced everything together.

For a $1.99 on the Kindle, I was perfectly happy with Sherlock Holmes Vs. Frankenstein. It was properly atmospheric, Whitehead’s take on Holmes felt genuine, and the story had momentum. I enjoyed it.

One thought on “Sherlock Holmes Vs. Frankenstein: The Novelization”