Yesterday I went to Big Lots. It wasn’t the reason I went out — I needed to go to Kohl’s to buy a new pair of shoes for work, as the pair of shoes I had was utterly blown out — and since Big Lots is in the same area as Kohl’s I made a stop.

And then I saw it. Stargate SG-1 almost-LEGO from a company called Best-Lock. “That’s interesting!” I said to myself. I had no idea that anyone had licensed Stargate for building block toys; it’s a dead property these days, and I couldn’t imagine there would be much, if any, demand for Stargate merchandise. Nonetheless, I was intrigued; I have friends who love Stargate and who love building things, and I thought perhaps it would make a fun Christmas present. It wasn’t expensive, just fifteen dollars, so I went ahead and picked the set up.

Inside the box, it looks exactly like LEGO. The bricks are in little baggies, there are instruction sheets and stickers. So far, so good. 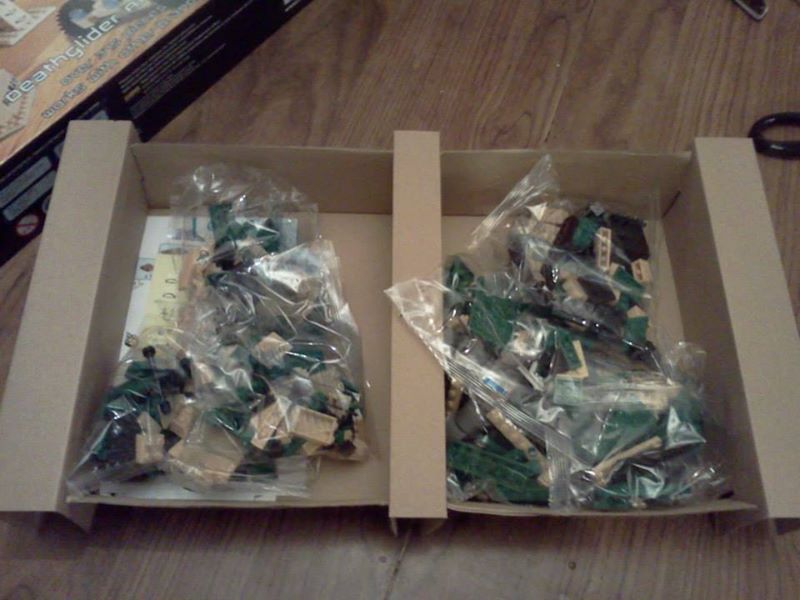 Up close, the pieces look LEGO-like. More LEGO-like than Hasbro’s KRE-O, not as LEGO-like as Character Building. At a glance, without really touching them, Best-Lock’s bricks seemed close to Mega Bloks. 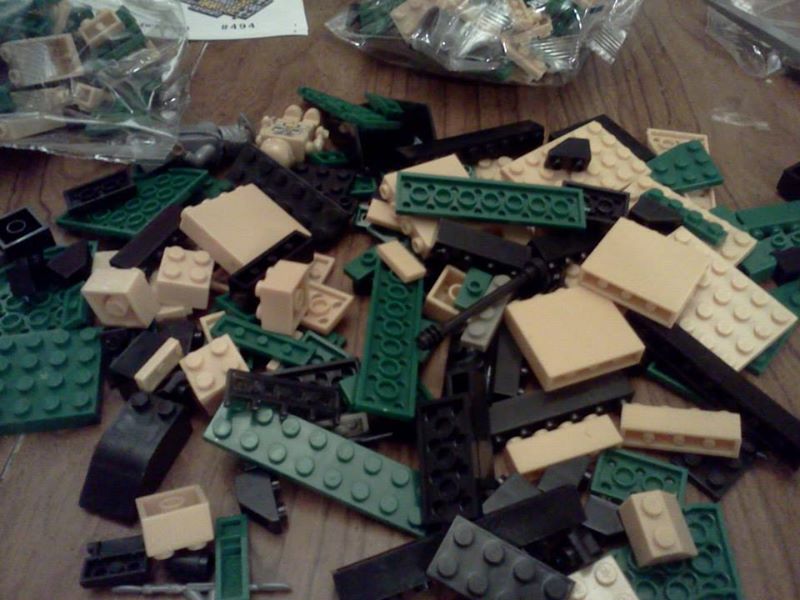 Then came the real test — building. There were four instruction sheets — Horus statue, all-terrain vehicle, obelisk, fighter. I chose one at random, so random that I was surprised to discover that I was building the Horus statue. And here the similarity to LEGO ended.

These pieces did not fit together well at all. Brick did not snap cleanly on brick. Bricks stacked on top of one another did not make a straight build. And because the bricks didn’t snap together cleanly, it could become very difficult to build onto something already built. This would become a frequent problem. 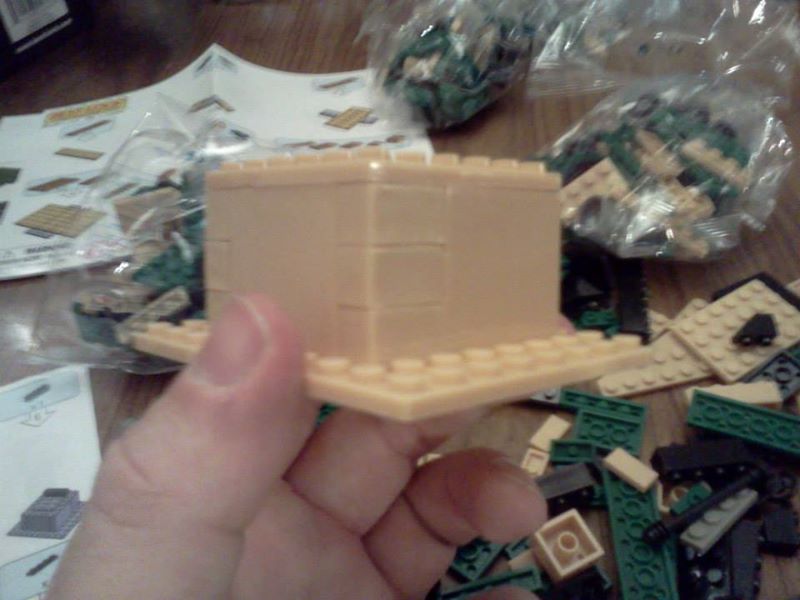 This is the base and legs of the Horus statue. It may not be obvious from this photo, but these legs were not lining up. 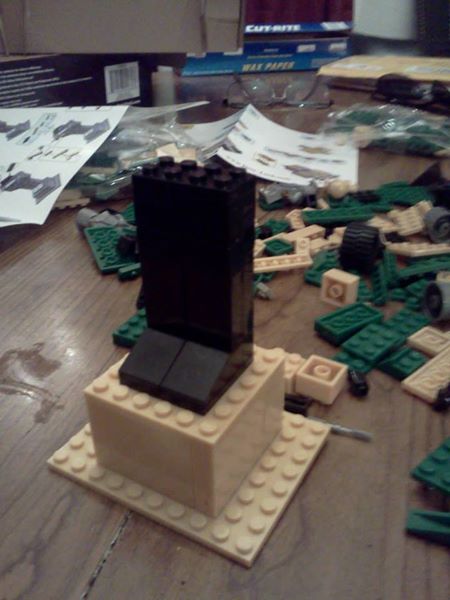 Eventually, I would have to rebuild the legs of the statue. Why? Because they broke apart when I tried to build the statue’s torso. 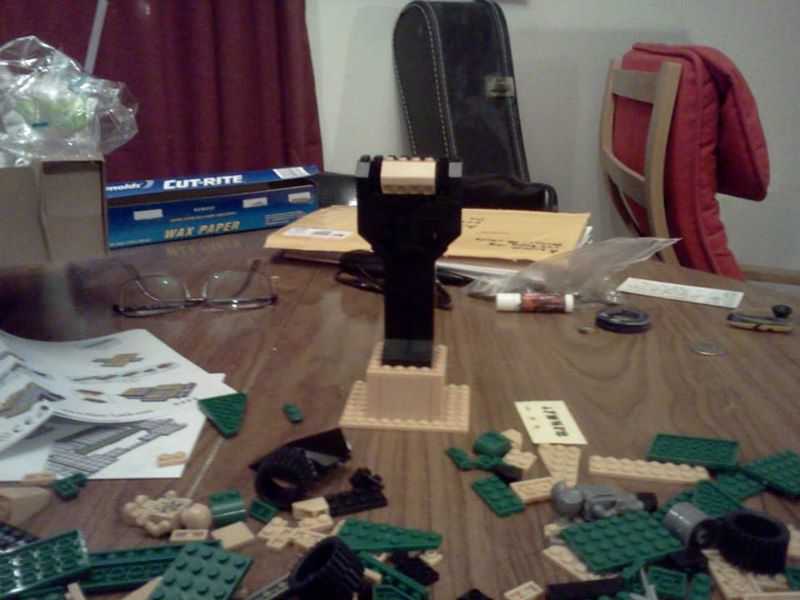 See the sand colored slanted piece at the top? Trying to lock that into place caused the whole thing to break apart. 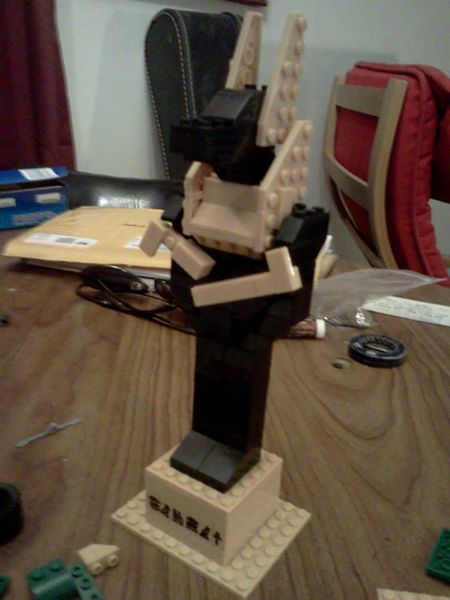 Horus is done. Affixing the headdress pieces caused a number of things to break off. And you probably can’t tell, but Horus has eye stickers. The reason you can’t tell is the eye stickers are clear with black markings on them, and they go on a black piece. Brilliant design there!

I gave up for the night after building the obelisk. There’s nothing to speak of there; it’s a ten piece thing that snaps together tolerably well, though it’s not exactly straight. Getting the stickers on was probably the toughest thing.

This is the sight my coffee and I faced in the morning. 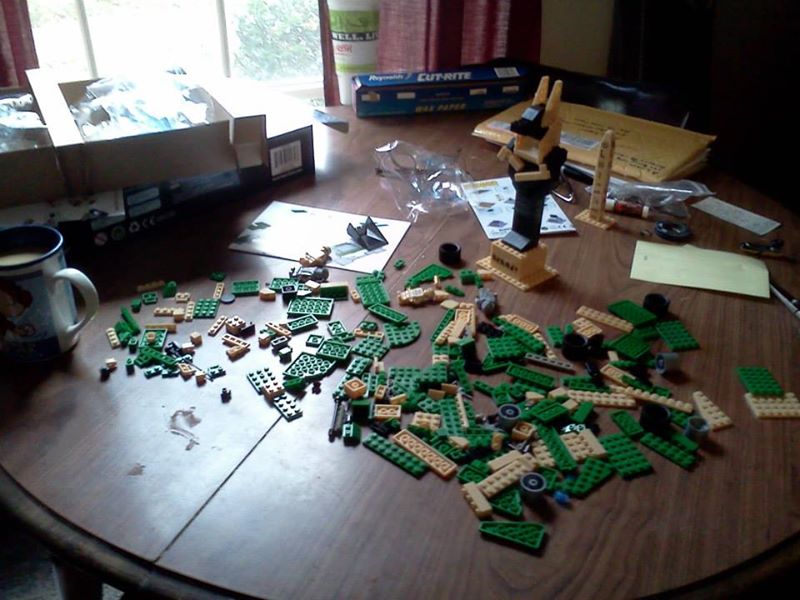 The all-terrain vehicle looked staightforward, but it wasn’t. The exhaust assembly was a pain to build; oddly, it looked simple on paper, but I had to remove it from the vehicle and assemble it, then reattach it. There are some pieces with studs on the sides that would break off if I handled the partly constructed vehicle in any way. 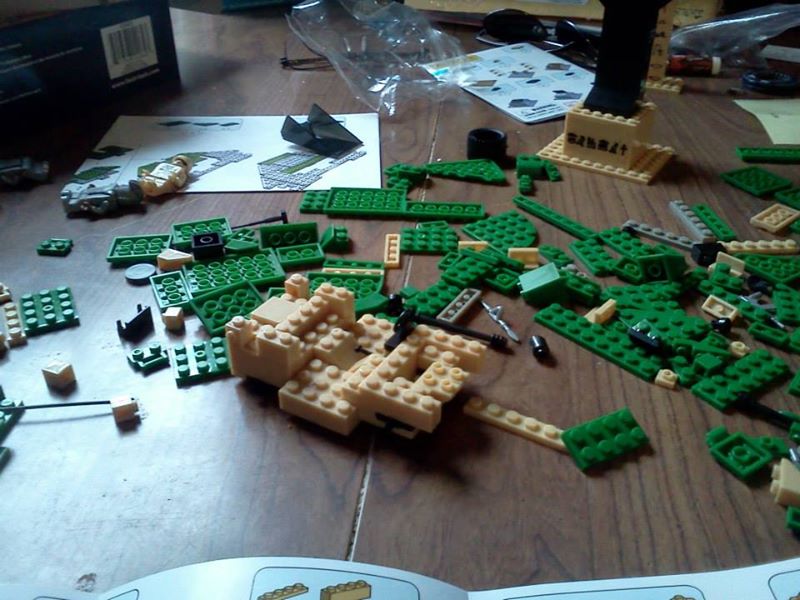 Oh, and one of the pieces for the vehicle’s seats was missing. I hoped that it would turn up, process of elimination style, as I built the fighter, but it never did. Nor was that the only critical piece missing from the box. 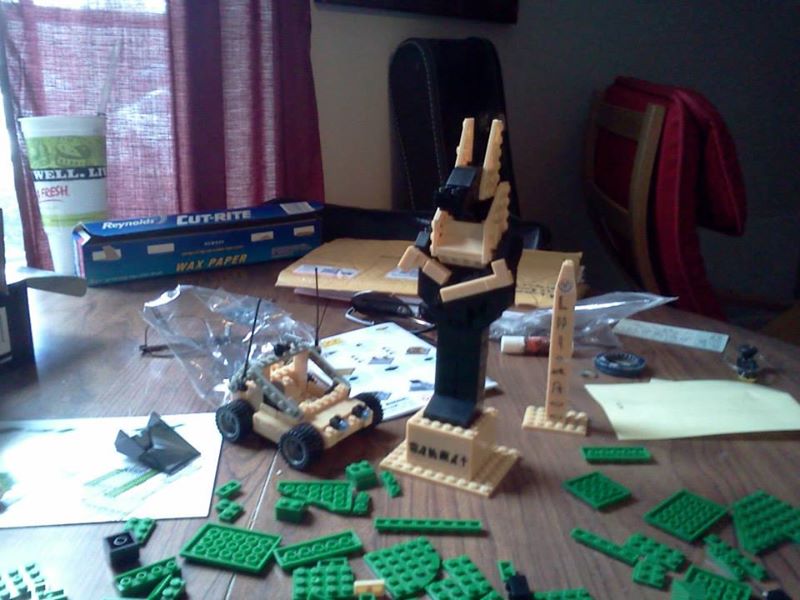 The vehicle was tricky, even when finished, for the antennas kept falling through the clips that held them. Nonetheless, it was done, and that left only the fighter left to build.

And that would get off to a poor start, because right in step one I was missing a critical piece. 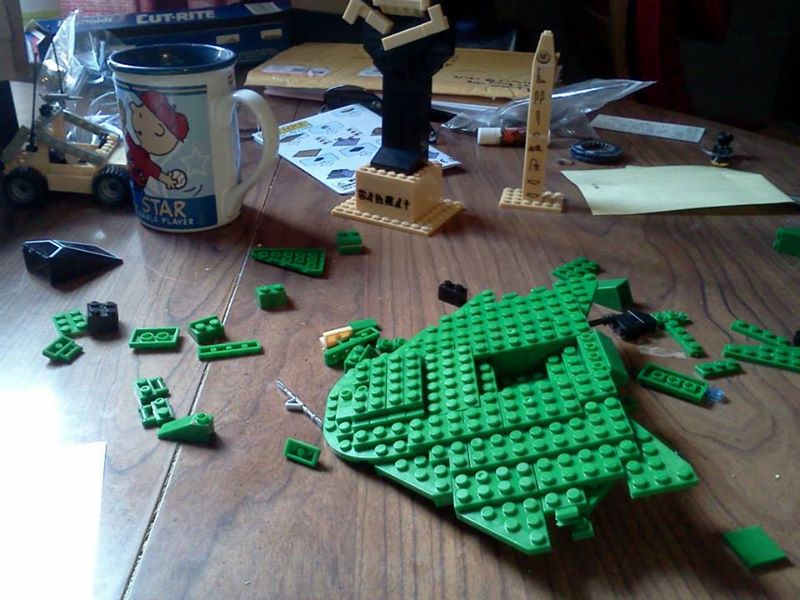 Missing — one of the female wing-mount pieces. (I’m using “female” in the computer sense; it’s a piece that something snaps into. The matching piece that would snap into it is the “male” piece.) Close to the camera you can see one female piece. On the opposite side there are two. Just as I had with the piece for the ATV, I hoped by process of elimination that I would find the piece, that I had simply overlooked it. I had not. 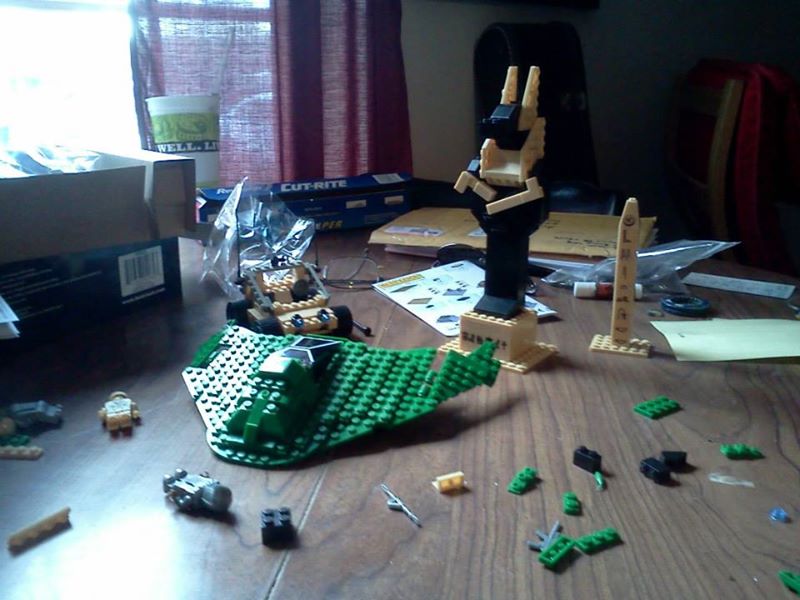 The fighter was generally a frustrating thing to build. It was flat piece on top of flat piece, and they didn’t lock together smoothly. I had to disassemble part of the of the model to get the canopy into place. The “engine” behind the canopy was interesting to build, but it was also fragile. Also, the instructions have you put the laser cannons on early, but they kept breaking off due to handling, and later I would move them slightly because where the instructions indicated to affix them led to them breaking off constantly. 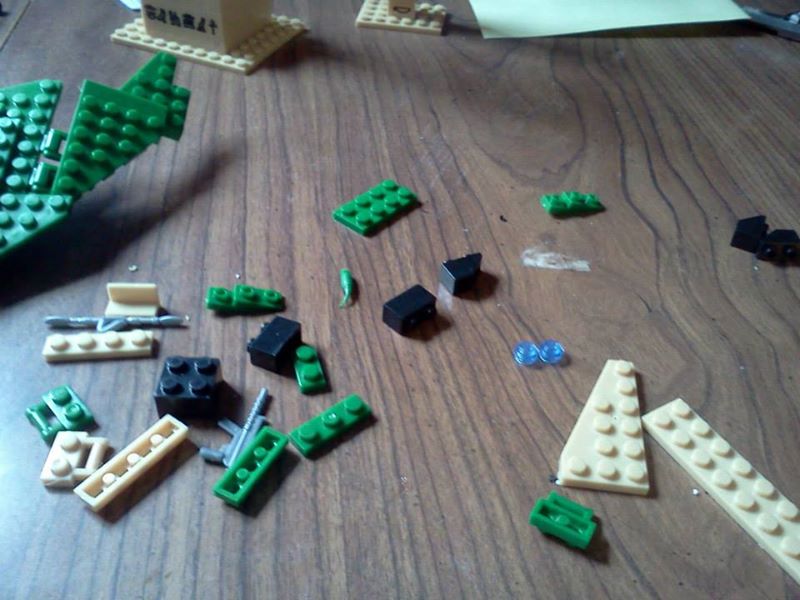 Here it is, all done, though I would shortly rebuild the wing mounts on the fighter so that each side had only a single female-to-male joint. 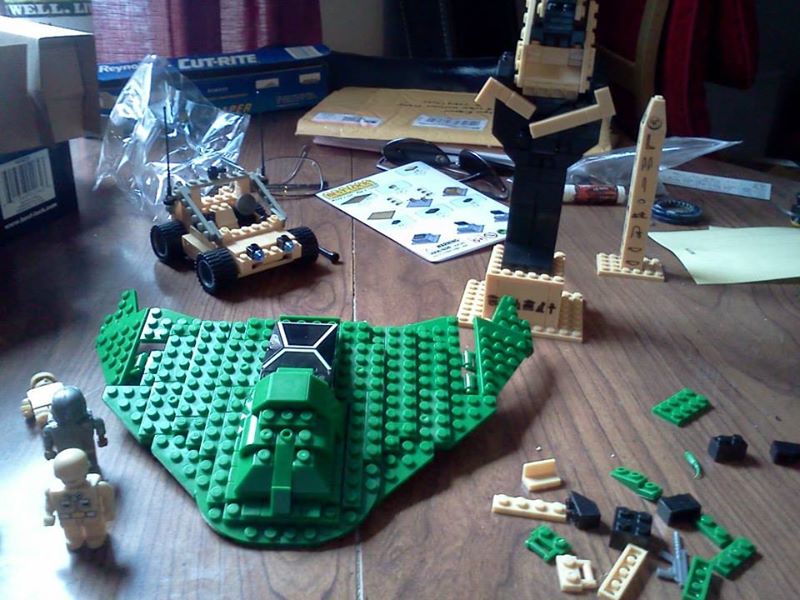 Stay away. Stay far, far away.

Let me say upfront that I’m impressed that there’s a company that was willing to license a dead property like Stargate SG-1 and keep it out in front of consumers.

However, no matter how much you love Stargate SG-1, in my opinion this set isn’t your time, your effort, your money, or your sanity. If it’s what you want, nothing I say is going to keep you from buying it, but at least you’ll buy it knowing the set’s flaws. If you’re given this as a present, smile kindly and know that your loved one’s heart was in the right place. The instructions are clear, but the pieces they go with are frustrating to work with, and missing pieces, especially critical missing pieces, are a no-no.