At work, I receive Marvel Comics' press releases.  This week they've been sending press releases about Marvel Legacy, the upcoming one-shot that is supposed to set the new direction for the Marvel Universe after years upon years of Secret Invasions and Secret Wars.

Among the press releases this week have been promo images for the "Avengers of 1,000,000 BC," a team of legendary heroes with familiar names who existed in the distant past, so distant that they've been forgotten, so significant that they inspired myth and legend as a kind of cultural memory.

Among the "Avengers of 1,000,000 BC" there's Odin, the Norse god.  There's also an Iron Fist and  Phoenix host, not to mention Agamotto, the magical being that Dr. Strange knows.  (I'm barely familiar with Dr. Strange, frankly, so I'm not clear at all about the relationship between Strange and Agamotto.  I know it involves an eye, but I'm not sure how.)

The teaser images puzzle me.  The Iron Fist appears to have Asian features, but I'm not sure how that would be, just as the Phoenix host has red hair, which would be genetically unlikely if not impossible.

The problem I'm having with "the Avengers of 1,000,000 BC" is that Earth's hominid population at that time would have numbered somewhere between 50,000 and 70,000 of homo erectus, an ancestor species to modern humans, homo sapiens.  Homo erectus made its home in eastern Africa.  They were a primitive hunter-gatherer society.  They were able to use fire.  They had primitive tools.  They possibly cooked their food.  They were probably dark-skinned and dark-haired, evolutionary adaptations to withstand the sun.  Based on studies of human lice and their genetic drift, homo erectus probably went about naked.  Based on fossil studies, homo erectus probably had some language abilities.  They would have looked to us to be almost human but not quite.

My problem with the Avengers of One Million BCE isn't that they exist — I've no doubt that someone could do something interesting with pre-human super-powered characters in paleolithic times — but that the Avengers of One Million BCE shouldn't look human.  The heroes of this era would not have been fair-skinned, had Asian features, or even had red hair.  (The red hair gene didn't develop until roughly 100,000 BCE.)  They would have had sloped foreheads, flattish faces, and heavy brows.  They would have had darker skin and hair to resist the sun's glare.  Males would have been larger and stockier than the females; homo erectus had extreme sexual dimorphism by modern human standards.  In short, the promotional teasers don't reflect the reality of hominid life on Earth in One Million BCE at all.

I've ordered the Marvel Legacy one-shot, though not with any enthusiasm.  My curiosity outweighs my indifference.  Nothing about the Avengers teasers have moved my emotional needle this week, and it's possible that I'll cancel my order.  Yet I feel that I should read Marvel Legacy, even if it's twice the price and shorter than the similar DC Universe Rebirth special, because it's an important moment for Marvel Comics and the comics industry.  But I'd probably be more intrigued by it if its characters reflected who actually lived on Earth in One Million BCE. 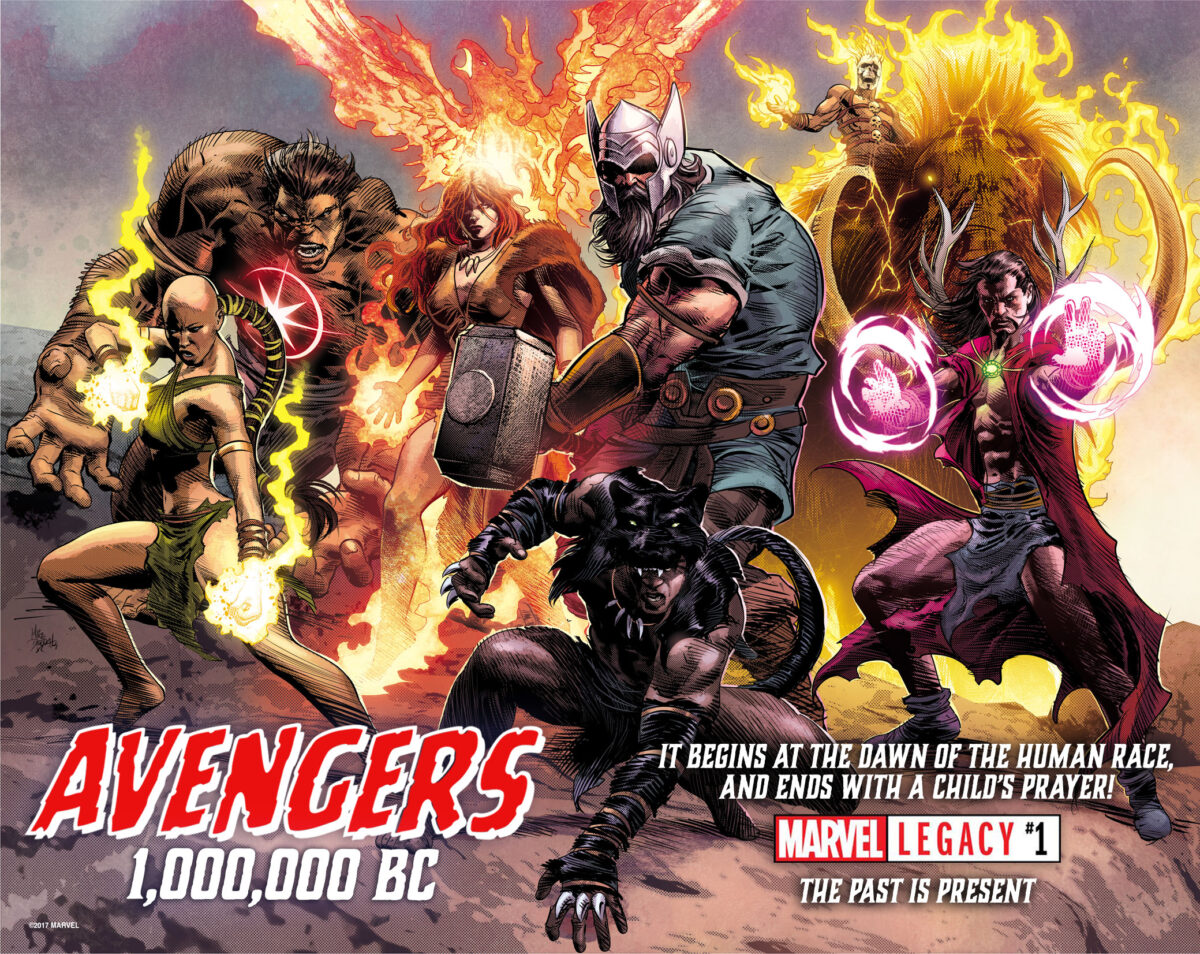