Yesterday afternoon I was cleaning up my bookshelves, and I took a moment and looked at my shelf of Nick Hornby books, as one does: his novels (except the latest, Funny Girl, which I’ve not picked up), his screenplay for An Education, his book on music, even some of the Polysymphonic Spree books. As I looked at the shelf, I had the thought: “There’s a movie adapting A Long Way Down. You should look for that.” 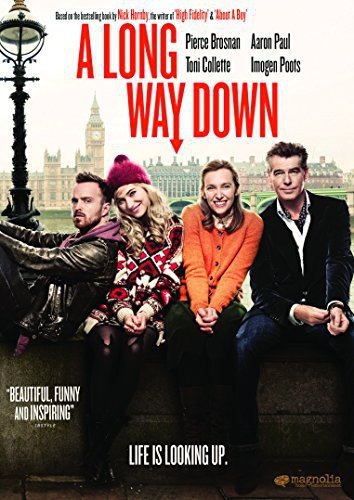 Indeed, there is a movie. It stars Pierce Brosnan, and the screenplay for it is available for download on the BBC Writers Room website. Unlike the movies based on High Fidelity, About a Boy, and Fever Pitch (which has, frankly, nothing to do with the book), I don’t recall the Long Way Down movie receiving any sort of wide release.

I put the thought out of my mind, I went about my day. It was a fleeting thought of no import.

Then I went to the grocery store in the afternoon, as one does, but instead of going to the Weis Market which is closer I went instead to the Giant across the street. There’s a Dollar Tree next to the Giant, and for no reason that I can fathom, I decided to take a look in Dollar Tree. And, right in the front of the store was a dump of DVDs for a buck. And, wouldn’t you know it, but I found A Long Way Down. (I also found a complete collection of the Paddington Bear television series, which was actually more exciting to me.) To make a strange story short, a movie I had a fleeting thought about in the morning I held in my hands six hours later.

A Long Way Down. On New Year’s Eve, four strangers meet on top of a London high rise, each of them intended to toss themselves over the side and end it all. Martin, the former morning talk show host whose life and career came crashing down due to an underage sex scandal. Maureen, a mother who cares for her severely disabled son and can’t take it any more. Jess, the twentysomething daughter of a minor Cabinet secretary who had just suffered a break-up at a club with a boy named Chas. And JJ, an American musician who works in a London pizzeria who also has an inoperable brain tumor. All four had picked this particular moment to climb the fifteen flights of stairs, all four meet on a cold London night, and all four realize the absurdity of what they had intended to do. Due to a series of misadventures that night, they bond and form a non-suicide pact and they will revisit the issue six weeks later on Valentine’s Day. For reasons too pointless to go into, the quartet becomes famous for their pact, and as the calendar approaches Valentine’s Day a series of events threatens the bond that the four had formed and leads them back to the top of the London high rise where they revisit the questions that had sent them there in the first place back on New Year’s Day.

Nick Hornby’s book came out back in 2005, when I was still living in Raleigh. I have literally no memory of reading the book, though when I took it off the shelf this morning and flipped through it much of it felt familiar. I mention this, because I don’t remember if the book was meant to be comic or serious or somewhere in between. Some writers are described as “seriocomic,” and I think I would use the term “sardoniserious” for Hornby — his writing tends to be serious, but it’s leavened with humor in a sardonic, even dark way. Because I don’t remember if A Long Way Down, the novel, was serious or comic, I don’t know if the film properly captures the book’s tone. The film was only intermittently amusing. For long stretches, it’s dully serious, emphasis upon the dull.

For a drama, A Long Way Down is simply not engaging. I didn’t care about the characters. Each character has moments, but they are all underwritten, their motivations are unclear, and they have no goals. If each character’s base goal is simply to make it to Valentine’s Day, I never felt like that was in jeopardy. The actors — Pierce Brosnan, Toni Collette, Imogen Poots, and Aaron Paul — do their best with the material they have; Brosnan does a good job of conveying a man who had everything that he thought mattered to him and lost it, even if the specifics aren’t on the page, Collette shows the most growth as she begins to see her son as less of burden upon her life, Poots has the sharpest drawn story outside of the quartet, but I never understood what the heck the story behind JJ (Paul) was.

I wrote on Twitter that I felt like I overpaid for A Long Way Down — and I only paid a dollar for it — which is harsh. The film is well-made, the actors do good work, yet I don’t see myself rewatching this, but that’s true of two of the other three Hornby adaptations. Americanizing High Fidelity robbed it of its charm, and John Cusack was all wrong for the main character. Fever Pitch is utterly divorced from Hornby’s memoir. About a Boy, on the other hand, remains charming fifteen years on, and I could watch that again and again. (I have not seen the American television series based on About a Boy. I’m aware of it.) Sure, it’s amusing to see James Bond (Brosnan) and Sidney Reilly, Ace of Spies (Sam Neill) share a couple of scenes, but that’s not a compelling reason to revisit A Long Way Down.

I probably should have watched Paddington Bear instead.