One of the kittens was hit by a car this morning.

I was sitting on the porch eating breakfast when it happened. After the hit the kitten ran into a nearby flower bed and collapsed. 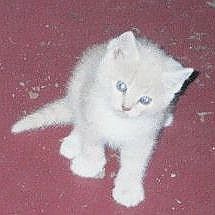 When I reached it it was breathing. I knelt down and knew.

I picked up the kitten, and by the time I reached the porch it was dead.

I laid it on the porch shelves, went inside, found a shoebox. I laid the kitten inside the box, closed the lid, went back into the house, fixed another pot of coffee.

An hour later I gathered up some old tee-shirts to line the box. It wasn’t until I stepped out onto the porch, tee-shirts in hand, that what had happened hit me and I started to cry. I opened up the box, laid down two of the tee-shirts, placed the kitten on them, placed a cat toy in its paws, and then covered the kitten with two more shirts. I closed the lid, placed the shoebox back on the porch shelves, found the shovel, and went out into the backyard.

There are some nice trees in the backyard. There’s a spot at the base of one of the trees where the sun strikes in the morning and spends the afternoon in shade. It was the right spot.

The hole dug I went back to the porch, placed the shoebox gently in the hole, covered it over with the dirt, and tamped it down.

I haven’t buried a pet in nearly four years, not since Guinevere, my polydactyl cat, died suddenly. It never gets easier.