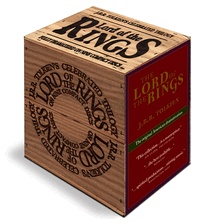 When I was younger, in those days before the Internet made mail order shopping so ridiculously easy, my family used to receive the NPR Shop catalog. And the Barnes & Noble catalog.

I don’t know which catalog I saw it in, but I’m sure it was one of those two — the NPR radio dramatization of The Lord of the Rings. What struck me about the production was how it was packaged — it came in a wooden box, and I wanted it. Oh, I wanted it, my precious!

About five years ago, not long before I moved from Raleigh, I found the cassette version of the NPR Lord of the Rings, in the wooden box, for ten dollars. I listened to it once, and it was… okay. I love the wooden box, though.

Recently, I had the opportunity to get the dramatization on CD. The cassette version comes on twelve cassettes, four for each of the books in J.R.R. Tolkien’s epic fantasy. The CD version also comes in a wooden box, and it’s on nine discs, three per book.

It is not the world’s greatest production. This was done around 1979, and it’s heavily reliant on narration to move the story forward. (I think that years of listening to Doctor Who audio dramas, fan and official, have spoiled me; I’ve become used to the dialogue carrying everything.) Also, it’s clear the actors and director weren’t that familiar with the source material; Saruman, for instance, is pronounced “Saa-ROO-min.” (That’s more accurate than the Ralph Bakshi film, where Saruman becomes Aruman.)

The roles aren’t terribly cast. Bernard Mayes’ Gandalf isn’t far removed from Sir Ian McKellan’s. And I think I like Tom Luce’s Aragorn a bit more than Viggo Mortensen’s. Heresy, I know. The Hobbits Sam, Merry, and Pippin, however, could be better. A lot better.

No, I didn’t need the CD set, except for its wooden box, which drew me in. But it’s nice to have. I blame my addiction to shiny plastic discs.